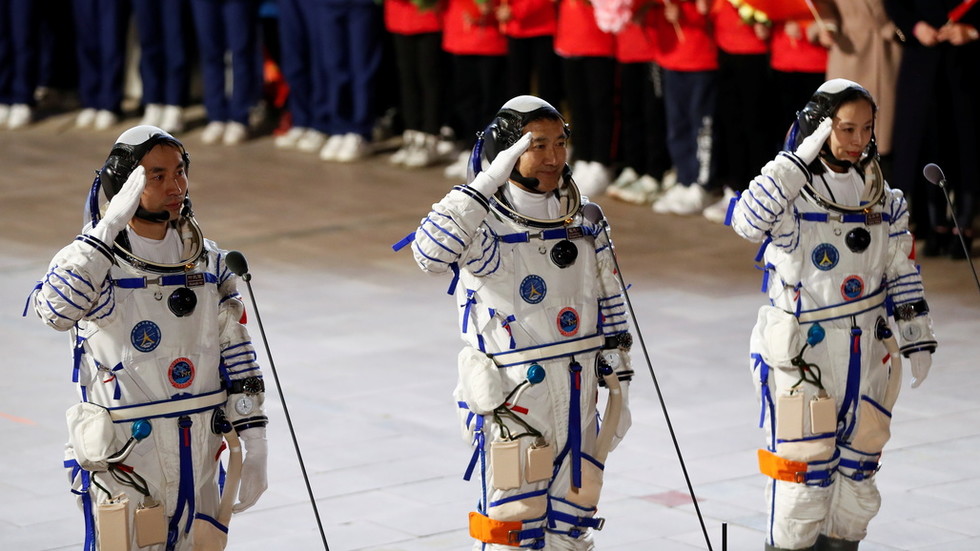 China’s second manned mission reached the Tiangong space station, which is still under construction, on Saturday. The three astronauts left the Shenzhou-13 spacecraft and entered the station’s core module.

The three astronauts, or ‘taikonauts’ as the Chinese call them, made it from the vessel to the space station’s Tianhe core module at 10:03am, the China Manned Space Agency announced.

Footage from inside Tiangong shows them greeting mission control back on Earth, becoming acquainted with the station’s equipment, and having some fun in zero-gravity.

The crew – Zhai Zhigang, 55, Wang Yaping, 41, and Ye Guangfu, 41 – will spend the next six months in orbit, making it the longest mission in the history of China’s space program.

During this time, they will try out the key technology and robotics required to assemble the space station, test the onboard life support systems, and conduct various scientific experiments.

While this is Ye’s first trip to space, it is the second time for mission commander Zhai, who performed China’s first spacewalk in 2008. Wang, the first female on the Tiangong space station, has also been to space before (2013).

China started construction on the space station in April, with plans to complete the ambitious project by late 2022. It currently consists of its largest Tianhe module, as well as Tianzhou-2 and Tianzhou-3 cargo crafts. The first crew of three astronauts returned from the station in September after 90 days in space.

After Zhai, Wang, and Ye make it back to Earth in April 2022, China plans to send two more manned missions to Tiangong, and add two more modules to the station.

Tiangong will likely be the only station in orbit after the aging International Space Station (ISS) ceases operations in a couple of years.