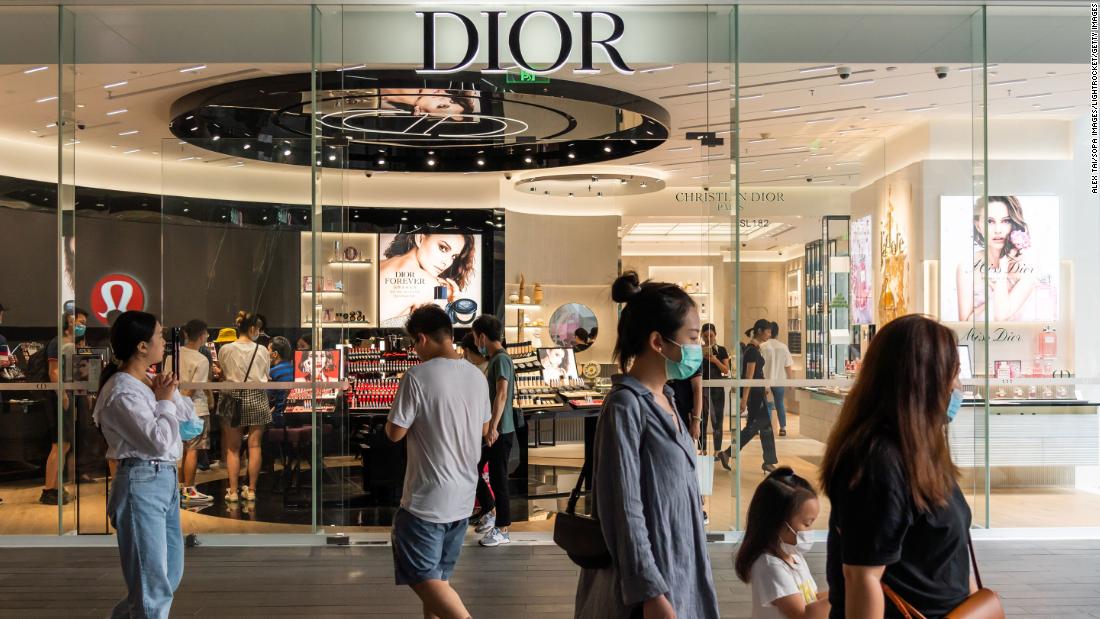 China's luxury market has proved "unstoppable" this year even as the coronavirus pandemic hammered global demand for expensive goods.

That's according to a report released Wednesday by Alibaba's (BABA) TMall shopping platform and the consultancy Bain, which said the Chinese luxury market would grow by 48% this year to about 346 billion yuan ($52.9 billion) despite the pandemic.

The growth will almost double mainland China's overall share of the global industry from 11% last year to 20% in 2020, the firms said.

"Mainland China is the only major luxury market to grow in 2020," Bruno Lannes, a partner with Bain's consumer products and retail practices, told CNN Business. "China's luxury market is now bigger than ever."

But it's not all good news for luxury goods producers. The sales boom in China has been powered by consumers who would normally have spent big on luxury goods while on vacation abroad. Overall spending by Chinese consumers on luxury products is down around 35%, according to Bain and Alibaba.

"Mainland China's portion of Chinese global luxury purchases this year reached a peak," the report said. "[But] the growth in mainland China does not compensate for the Chinese consumption lost overseas."

Bain and Alibaba project that the global luxury market will shrink by 23% in 2020, as the pandemic continues to limit travel and shopping in many places.

China rapidly suppressed early coronavirus outbreaks, allowing its economy to return to growth. By April, consumers in the country were starting to snap up expensive handbags, shoes and jewelry again, giving retailers some hope as sales in other markets faltered.

Travel restrictions helped boost sales in China. Another factor behind the surge has been dubbed "revenge spending," or a release of pent-up demand as people emerged from weeks of lockdowns. The trend helped create an uptick in sales this spring for several companies, such as Tiffany (TIF) and Burberry (BBRYF).

Government incentives have also helped. Earlier this year, Chinese authorities distributed coupons to help encourage people to shop, according to state media. That, too, has boosted luxury consumption, Bain and Alibaba said Wednesday.

Retailers have taken note of the changing market dynamics.

LVMH (LVMHF), the world's biggest luxury group, pointed to "great strength of the demand coming from mainland China" in an October earnings call.

"From a demand viewpoint, we have no particular worry, and we are very pleased with the response," said Chief Financial Officer Jean-Jacques Guiony. "But for the time being, there are serious constraints as to [customers'] ability to shop outside China, and this is obviously a weight on the growth for coming quarters."

Even before the outbreak, mainland Chinese shoppers were spending money closer to home as they avoided hubs such as Hong Kong due to mass protests, and as brands reduced the price gap that had typically made their products cheaper outside China.

And as with other sectors, the crisis encouraged more people to shop online.

The habit will likely stick. Nearly 40% of Chinese consumers plan to do more luxury shopping online over the next few years, while another 40% expected to maintain their current activity, according to Bain and Alibaba.

Next year, China's growth is expected to continue, albeit not at the same pace. Most brands believe the market will expand by roughly 30% as international borders start to reopen, according to the report. Over the next five years, the share of domestic spending will likely also "subside" as things gradually return to normal, it said.

But the Chinese market will have boomed in the meantime. In five years, China is expected to become the world's biggest luxury market — even after the world "returns to pre-Covid-19 levels," Bain consultants wrote.