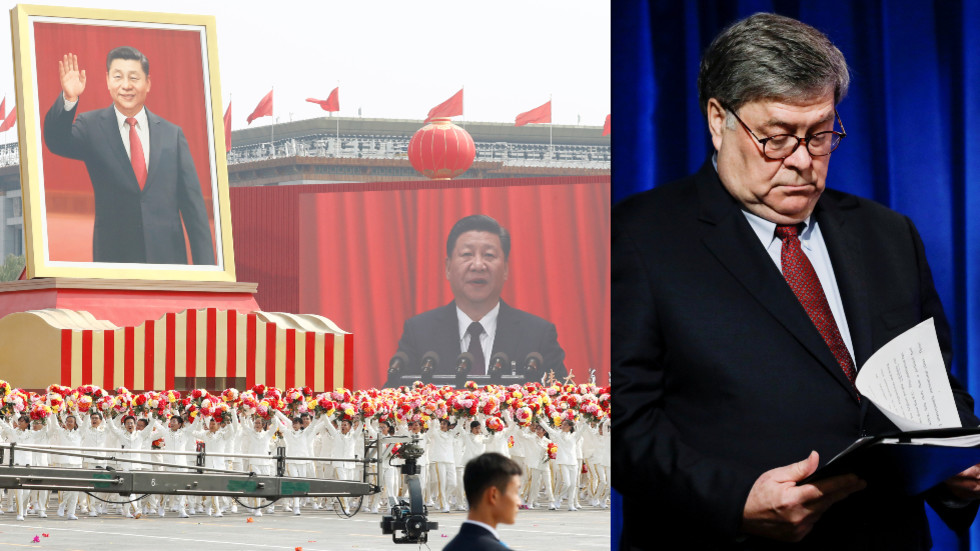 ‘China’s goal is to replace you’: AG Barr warns Hollywood, Big Tech & US academia not to ‘kowtow’ to Beijing

Attorney General William Barr just hardened the Trump administration’s line on China, accusing Beijing of wanting to replace the US as the dominant economic and political global power, with the help of America’s own institutions.

China is engaged “in an economic blitzkrieg, an aggressive, orchestrated, whole-of-government – indeed, whole-of-society – campaign to seize the commanding heights of the global economy and to surpass the US as the world’s preeminent technological superpower,” Barr said on Thursday in a speech at the Gerald Ford Presidential Museum in Michigan.

The Chinese Communist Party (CCP) wants “to overthrow the rules-based international system and make the world safe for dictatorship,” he added.

Barr made it clear from the start that he would be harsh, noting that last week’s speech about China by FBI Director Chris Wray was described in Beijing as “particularly disgusting,” and that he was aiming for “despicable” himself.

While Wray tried to have it both ways, accusing China of widespread economic and political espionage against the US but stopping short of advocating a break in trade relations, Barr barreled right on through, warning US industries and academia that China means to co-opt, destroy and eventually replace them altogether.

“The ultimate ambition of China’s rulers isn’t to trade with the US, it is to raid the US,” he said. While appeasing the People’s Republic of China may be profitable in the short term, “in the end, the PRC’s goal is to replace you.”

Much of the speech echoed the daily denunciation of China by the Trump administration – on human rights, censorship, Uyghur ‘concentration camps’ etc. However, Barr also condemned China’s ‘Belt and Road’ infrastructure initiative as “little more than a form of modern-day colonialism,” saying that it captured third-world nations into debt traps that allowed a Chinese takeover.

While US leaders hoped that opening trade with China would make it more democratic, that never happened, Barr said.

At this point, Barr pivoted to US companies “appeasing” China in order to make a profit, sacrificing their own futures and that of the country for short-term gain.

Hollywood has censored its movies – not just the export versions for Chinese consumption, but those shown to American audiences – and become increasingly dependent on Chinese financing. A full 20 percent of last year’s box office take went to Chinese-funded films, Barr noted, while each year actors and directors lecture Americans “about how this country falls short of Hollywood’s ideals of social justice.”

Disney once made training films for the US military and helped win World War II, but buckled before China after a ban over a pro-Tibetan film and went so far as to build a theme park near Shanghai and turn it over to Communist officials.

Apple has banned apps and even individual songs at the request of the Chinese government during the crackdown on Hong Kong protests, but refused to lift a finger to help the FBI crack the iPhone of the terrorist who went on a rampage at an airbase in Pensacola, Florida.

“You think Apple phones in China are impervious to penetration to Chinese authorities? They wouldn’t be sold if they were,” Barr told the audience.

He openly admonished American corporations and universities for acting like “global citizens” without understanding that they owed their success to the US “free enterprise system, the rule of law, and the security afforded by America’s economic, technological, and military strength.”

Barr also included a subtle threat, noting that those American executives who promote CCP political interests in the US may find themselves prosecuted under the Foreign Agents Registration Act (FARA).

The Chinese Communist Party has “launched an orchestrated campaign across all of its many tentacles in Chinese government and society to exploit the openness of our institutions in order to destroy them,” Barr claimed, arguing that the US needs a similar whole-of-society approach to fight back.

Whether that is true or not, the Trump administration has definitely launched a coordinated campaign against China, between the speeches by Barr and Wray and Monday’s formal rejection of Beijing’s territorial claims by the State Department. Barr actually noted that another major anti-China speech by Secretary of State Mike Pompeo is coming soon as well.

It is possible that a ramp-up in anti-China rhetoric could be related to the upcoming US presidential election. While President Donald Trump has been a hardliner on China since his 2016 campaign, his Democrat challenger Joe Biden has sought to portray him as “weak” on China during the pandemic.