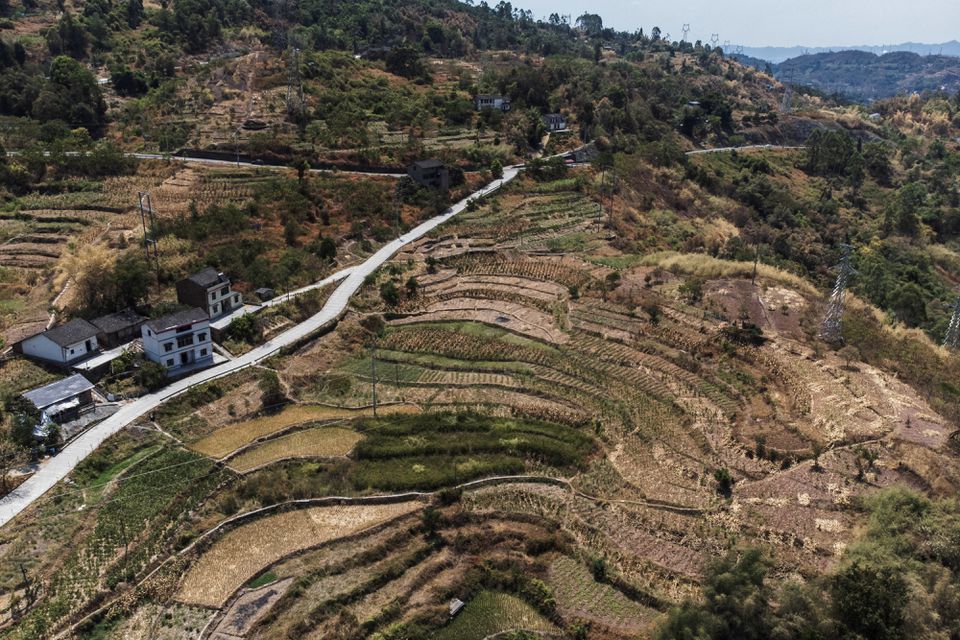 China's farmers struggle to save crops as heatwave, drought drag on

As the tinder-dry countryside along China's Yangtze River basin withers under a heatwave that has lasted more than two months, veteran farmer Chen Xiaohua recalled the last severe drought to hit his crops more than 60 years ago.
"This year is drier than 1960," said Chen, 68, from his plot of land in the village of Fuyuan in the rugged rural fringes of the Chongqing region in China's southwest. "The temperature is higher."

Chen's small plot situated close to the Yangtze River and its tributary, the Longxi, normally relies on fresh water from mountain streams, but that has dwindled to nothing in recent days, drying out his main crops, which includes sweet potato.

"In the past, at this time, August, sweet potato leaves grow very thick," said Chen, wearing a wide-brimmed hat to protect himself from the fierce sun. "From August to September, sweet potato should bloom."

As many as 66 rivers across 34 counties in Chongqing have dried up, state broadcaster CCTV said on Friday as weather service data showed a district in the region to be the country's hottest, hitting 45 degrees Celsius ((113 degrees Fahrenheit).

Rainfall in Chongqing this year is down 60 percent compared to the seasonal norm, and the farmland in several districts is severely short of moisture, CCTV said, citing local government data. The local government also said crops in 10 districts were suffering badly.

The Ministry of Water Resources warned on Wednesday that soil moisture had seriously deteriorated in Chongqing, neighboring Sichuan and several other provinces along the middle reaches of the Yangtze.

It urged regional governments not only to seek out new drought-proof water resources, but also draw up "timeshare" rotas that will allow farms to take turns in accessing depleted rivers, streams and reservoirs.

The central province of Anhui, which also relies on the Yangtze for water supplies, warned this week that excessively dry soil was affecting 88,000 hectares of autumn grain, according to CCTV.

China has described itself as "a sensitive region in global climate change" and said this month that its ground temperatures were rising much more quickly than the global average.

With irrigation from the mountains now dried up, farmer Chen said he has had no choice but to carry buckets to and from a nearby pond every morning to try to save his crops. The leaves and stems have continued to die.

"The temperature is so high every day. We have to work in the morning," he said. "In the afternoon we only stay in the house. We are afraid to go out."
Add Comment