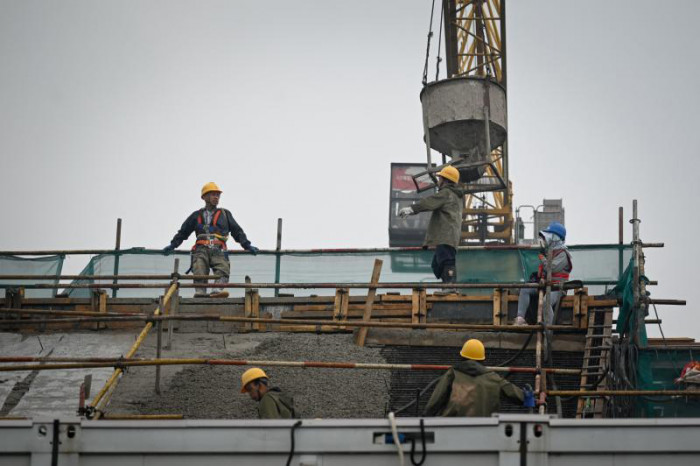 The official manufacturing purchasing managers index rose to 50.2 from 49.6 in May, the National Bureau of Statistics said on Thursday, slightly below the median estimate of 50.5 in a Bloomberg survey of economists. It was the first time since February that the index was above 50, indicating an expansion in output compared with May.

The non-manufacturing gauge, which measures activity in the construction and services sectors, climbed to 54.7, the highest in more than a year and well above the consensus forecast of 50.5.

“The Chinese economy bottomed out in June and the recovery is basically entrenched, although attention still needs to be paid to imbalances between the recoveries in supply and demand,” according to a statement from the China Logistics Information Center, which publishes the PMI figures in partnership with the NBS.

China’s benchmark CSI 300 Index rallied 1.6% by the mid-day break even as most Asian stock markets were trading lower. Chinese stocks were also boosted by news of further easing of virus-related travel curbs. The offshore yuan strengthened as much as 0.2% after the data release to 6.6935 a dollar.

Government restrictions to contain Covid outbreaks have gradually eased over the last month. The financial hub Shanghai lifted its two-month lockdown at the start of June by allowing more shops to reopen, more factories to resume production, and for port operation to pick up.

The data suggests “the pace of recovery accelerated as the Covid situation stabilized,” said Peiqian Liu, chief China economist at NatWest Group Plc. There was a “broad based but still soft recovery in both production and new orders,” and the figures show the rebound is still milder compared with the recovery from the Wuhan lockdown in 2020, she said.

Some 19 of the 21 sectors in the service sectors tracked in the survey returned to expansion last month, up from just six in the previous month, NBS analyst Zhao Qinghe said in a separate statement. Gauges of sectors previously hit badly by the outbreaks all improved, such as railway transport, air transport, accommodation, catering and entertainment.

The pickup in the transportation industry helped shorten the time for raw materials to reach manufacturing customers, with an index measuring the delivery time of suppliers jumping to 51.3, the highest in more than six years. A higher number indicates shorter delivery times, but that improvement likely lowered the headline PMI figure because of the way the data is calculated, economists said.

Normally shorter shipping times means demand is contracting and so indicates an economic slowdown. However this month, this indicates that logistics are getting back to normal, and so the actual rebound in manufacturing activity was likely stronger than the main PMI figure shows, according to economists including Standard Chartered Plc’s Ding Shuang and Zhang Zhiwei at Pinpoint Asset Management Ltd.

US firms in China saw an improvement in output and logistics in June from May, according to a survey by the American Chamber of Commerce in China, but the situation was still not back to normal.

Across all regions, 46% of respondents said production capabilities were reduced or slower because of an employee shortage, inability to get supplies, or government-ordered lockdowns. That was down from 59% in May. The recent outbreak is still affecting the supply chains of 45% of companies, but that is also down from 61% in May.

Demand for services warmed up in June as the impact of the outbreak waned and company sentiment improved, Zhao said. Consumer spending could further improve in July as the government loosened more Covid-related controls ahead of the summer holiday.

However, the recovery remains fragile as the country is sticking to its Covid Zero strategy, meaning restrictions could be tightened again if outbreaks flare up again. Chinese President Xi Jinping reaffirmed that policy this week, saying it was the most “economic and effective” for the country.

The NBS also struck a cautious tone, noting that 49.3% of manufacturers surveyed said their orders were “insufficient,” while the profitability of some companies is being squeezed as output prices continued to contract. “Relatively weak market demand remains a major problem facing the manufacturing industry,” Zhao said.

The sustainability of the rebound in services is questionable due to the increasingly negative outlook people have for income and the gloomy job market. Chinese depositors’ confidence in their future income tumbled to the worst level since the first quarter of 2020, when the pandemic first broke out, according to a survey by the central bank. About 58% of respondents said they were more willing to increase savings, up almost 4 percentage points from the the first three months of the year.

Economists, meanwhile, are holding firm on their gross domestic product growth forecasts for this year. The median projection in a Bloomberg survey for 2022 growth is 4.1%, well below Beijing’s annual target of around 5.5%. Bloomberg’s aggregate index of eight early indicators showed some improvement in June, though the recovery remains muted.