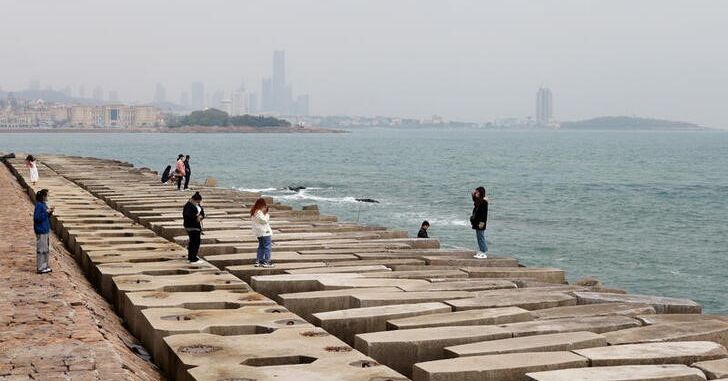 Most of China's marine ecosystems are still in poor health despite recent improvements, and more efforts are needed to restore, protect and monitor coastal waters, an environment ministry official said on Thursday.
"Most of the typical marine ecosystems that are monitored remain in a sub-healthy condition," said Zhang Zhifeng, deputy director of the marine ecology department of the Ministry of Ecology and Environment, at a briefing.

China has warned that rapid and high-intensity development in coastal regions has created immense environmental pressures, with pollution and habitat destruction still not fully under control. It has already promised to set up a system to restore large sections of its coastline.

Zhang said China approved 15 coastal infrastructure projects this year with a total investment of 66.9 billion yuan ($9.98 billion). It has also issued 378 permits allowing enterprises to dump waste in the sea.

He said marine biodiversity in China had improved in recent years, with almost 30% of coastal waters and 37% of the country's continental coastline now part of a "red line" scheme aimed at protecting them from degradation.

China launched the "ecological protection red line" system in 2011, with each region ordered to draw up maps of natural forests, rivers, wetlands and other vulnerable ecosystems that must be shielded from development.

About 25% of China's territory is now covered by the scheme, but it is under pressure to join other countries in pledging to protect at least 30% of its land and sea by 2030.

The target was due to be discussed during negotiations for a new post-2020 global biodiversity pact. The final stage of negotiations was originally set to take place in southeast China's Kunming but has now moved to Montreal amid concerns that China's tough zero-COVID measures would disrupt the talks.