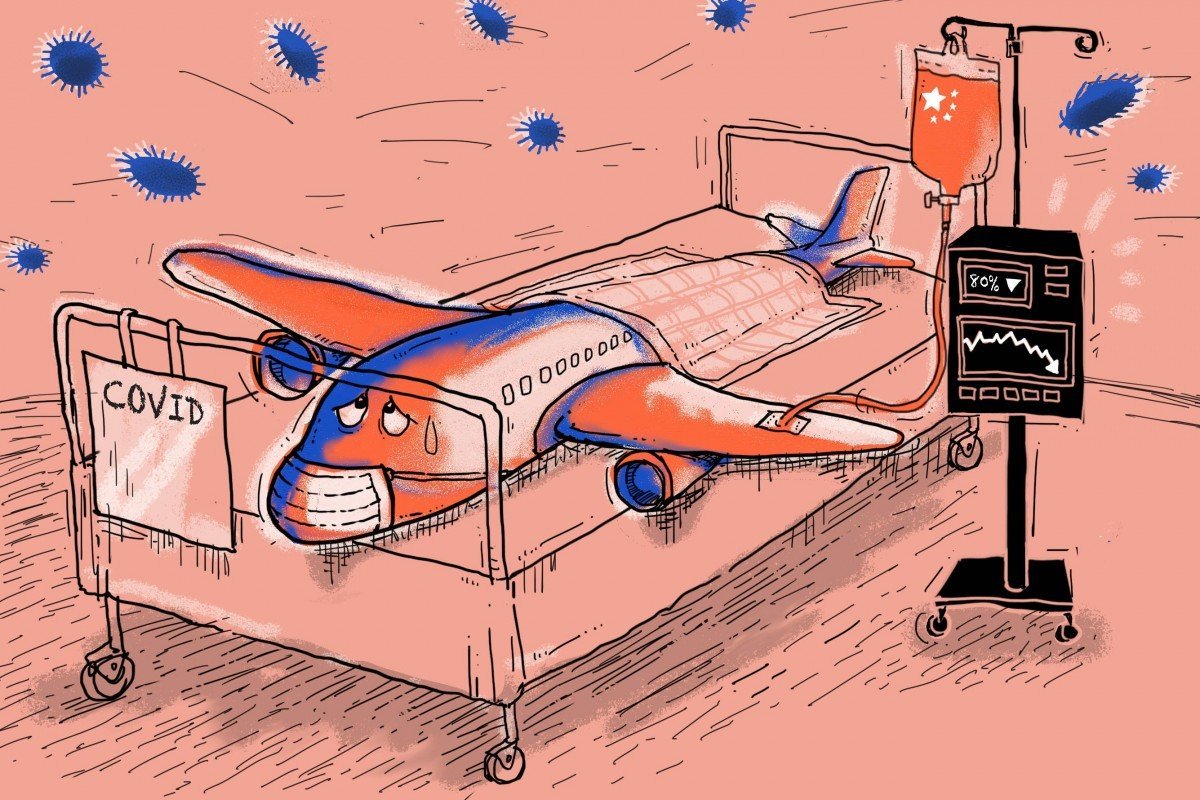 Coronavirus outbreak has been hammer blow to travel worldwide, with more than 70 countries or territories putting restrictions on flights from China. Chinese government expected to step up support for ailing aviation sector, but China’s long-term plans for global dominance could be damaged

This is part of a five-part series looking at how the coronavirus epidemic affects China’s relationships with the rest of the world. Part three focuses on how the virus is causing China to lose ground in its quest to become a global aviation power.

China’s aim to become an international aviation hub is taking a beating, as fears of a global coronavirus pandemic continue to intensify.

The coronavirus, which causes the disease officially known as Covid-19, started in the Central Chinese city of Wuhan, before fanning out around the country and beyond. Now, while the number of new cases is falling daily in China, they are rising elsewhere in the world, ruining travel plans across the planet.

More than 70 countries and territories had slapped travel restrictions and tightened visa requirements for travellers from China as of Thursday, according to the International Air Transport Association (IATA).

8China’s overall air traffic has rebounded from lows between January 20 and February 17, when it fell to 25th in terms of global market share, back up to second this week, according to data from OAG Aviation Worldwide.

However, this is mainly due to Chinese airlines cutting fares for domestic flights to record lows and the government handing out subsidies, rather than underlying demand, which remains extremely weak.

“Of the 2.9 million scheduled seats returning to the Chinese market, all but 3,000 are on domestic services,” read a blog entry on OAG Aviation Worldwide’s website on March 2. “Reports from industry sources suggest that the dramatic capacity recovery has led to very low fares being made available, as the Chines government seeks to repatriate locals after Lunar New Year.”

China this week announced that it would pay domestic and foreign airlines to restore services that were halted due to coronavirus. For every available seat, Beijing will hand out 0.0176 yuan (US$0.0025) per kilometre on routes shared by multiple carriers and 0.0528 yuan for routes only flown by one carrier, the Civil Aviation Administration of China (CAAC) said.

But with a spike of new infections spreading outside China, in particular, in South Korea, Italy and Iran, international travel restrictions are likely to remain in place.

“Getting the suspensions lifted will call for some sort of decisions that show the epidemic is under control from the relevant health authorities, [including] the health authorities in the state of the airline,” said Andrew Charlton, managing director of Aviation Advocacy, a consultancy.

In the case of Australia, for example, Qantas would have to follow the lead of local health authorities, as well as the World Health Organisation (WHO).

The WHO has declared the outbreak a “public health emergency of international concern”, but has thus far stopped short of calling it a pandemic, a move that could trigger further drops in airline traffic, analysts said.

China has a massive stake in the aviation market after years of investing heavily an attempt to catapult more of its airports to statuses in line with the likes of London and Tokyo.

For example, the new Beijing Daxing International Airport, which was designed by the late architect Zaha Hadid and opened last year, cost 120 billion yuan (US$17.3 billion) to build.

And last year, Shenzhen and Guangzhou in Guangdong province pressed ahead with fresh investments to raise their standing in international air travel, amid anti-government protests in Hong Kong that placed question marks over the city’s future as an international travel hub.

The Guangzhou city government last year said it aimed to become a key centre for the international transport network by 2035. By that date it plans to add 103 new international routes by 2035, lift air cargo traffic from 1.78 million tonnes in 2017 to 5 million tonnes, and raise passenger volumes from 66 million in 2017 to up to 140 million a year.

But many airports in China now face a reversal in fortunes due to the virus, with growing concerns over unemployment in the sector.

Beijing now “has little choice but to continue to sustain local airlines and airport operators”, given the impact of the virus, said Shukor Yusof, founder of aviation advisory firm Endau Analytics.

“This is a very capital-intensive sector and funds drying up could spell doom for very weak airlines,” Yusof said.

In February, IATA estimated that airlines in the Asia-Pacific region would lose US$27.8 billion in revenues this year because of the outbreak, with some US$12.8 billion lost in the Chinese domestic market alone.

The Chinese aviation industry is expected to lose at least 72 billion yuan as a result of fight cancellations and weak demand among travellers in February and March, according to estimates by research firm Civil Aviation Data Analysis.

And while many Chinese airlines have now resumed flights, the percentage of seats that are filled is still well below average. Flights leaving China’s top three airports by passenger volume – Beijing, Shanghai and Guangzhou – had an occupancy rate of just 51.3 per cent on average in February, the firm said.

Luya You, an analyst at Bocom International who focuses on aviation, said forward bookings for April still appear to be “very depressed”.

“Airlines are cutting capacity far more than they could have forecast even a year ago, meaning current staffing levels are likely far too high for the year ahead. So moving forward we do expect more staff cuts,” You said.

Many of China’s airlines are owned by local governments, which increases the likelihood of a state bailout of any ailing companies, regardless of their prospects.

“Regional airlines were created for strategic reasons by regional or city governments,” said Brendan Sobie, an independent aviation analyst. “It is not that surprising for the governments to step in to help the airlines, because it’s a crisis situation.”

The Hainan government is effectively taking over HNA Group, which owns or holds stakes in a number of local Chinese carriers including Hainan Airlines, after the indebted conglomerate had asked the government to lead a working group dedicated to resolving its growing liquidity risks, after a slowdown caused by the epidemic.

Hainan Airlines suspended some flights to North America, Europe, Southeast Asia, Japan, and Taiwan in February and March because of the epidemic, which came as the airline was already experiencing financial difficulties. Net profits for the first three quarters of 2019 fell 16 per cent from a year earlier, the airline said.

“There have been questions over the HNA Group's exuberance in the market for some years now. I suspect the CAAC and other agencies dealing with aviation in China will leave no stone unturned, but I'm not sure how far China is willing to go to swallow the bitter pill of allowing mismanaged or financially crippled mainland entities to go under,” said Yusof at Endau Analytics.

Furthermore, analysts believe even if more cash floods the industry it will not make a significant difference due to weak confidence among travellers right now.

“The biggest issue right now is still demand,” said You at Bocom. “If people aren’t flying because of the coronavirus, it’s unlikely that even steep price discounts could stimulate significantly more demand.”