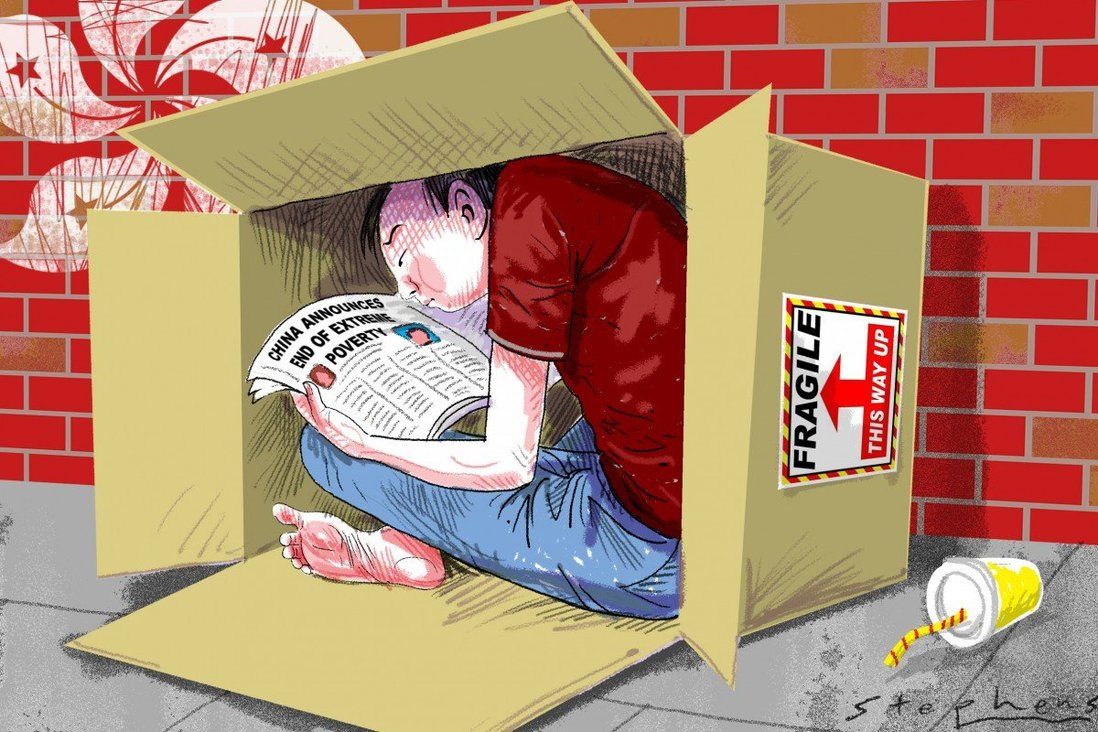 The single-mindedness with which Beijing has pursued its goal to eradicate absolute poverty is worthy of emulation. The UN’s Sustainable Development Goals are good starting points for Hong Kong to work towards, mapping out local, measurable targets along the way.

China’s recent white paper celebrating the end of extreme poverty will be dismissed by critics as propaganda or PR fluff. Yet what cannot easily be dismissed is the evidence that mainland China has indeed made extraordinary economic progress over recent decades, and that its leaders have achieved much of what they set out to do in eradicating absolute poverty.

The speed with which draconian measures were introduced to curb the spread of Covid-19 is also telling. Those living elsewhere, including in Hong Kong, may be asking whether they are seeing the same degree of collective single-mindedness in pursuit of social goals in their own regions.

In January 2016, with a year remaining on his term as US president, Barack Obama announced a “moonshot” to find a cure for cancer, establishing a US$1 billion fund and task force to spearhead a five-year effort to accelerate immunotherapy breakthroughs. Five years on, there may have been some great progress – who knows? After the initial press conference and a report by then vice-president Joe Biden 10 months into the initiative, there have been no major public updates.

Some say that democratic nations cannot make long-term plans due to the term constraints of democracy. This is an absurd claim. Leaders may change after four or five years, but public interests and concerns are generally not so fickle. Governments can pick up the baton that’s handed to them by their predecessors, make adjustments and adopt their own style, all while still going in the direction expected of them.

To the extent that there are common ethical principles, there is no reason key public goals should not remain in place over a decade or two if they are genuinely for the betterment of the population.

At times it may seem hard to believe that there are common and sustaining principles, particularly for those living in societies viewed as fractured or polarised, but a framework does already exist. The world has the Universal Declaration of Human Rights, and a set of 17 Sustainable Development Goals
approved unanimously by United Nations members in 2015. It is for individual administrations and communities to decide for themselves how to draw these into their domestic agendas.

In fairness, Hong Kong has concerned itself with some of these goals. The Commission on Poverty was re-established in 2012 with the aim of better monitoring the relative poverty situation in Hong Kong. As a result, an official poverty line was established, following the introduction of a minimum wage
two years earlier in 2011.

Yet, after 10 years, it is not at all clear that progress has been made in reducing inequality. We have not set any specific goals and targets, and more commitment and effective measures are needed.

At present, more people than ever are reliant on government handouts, going by the number lifted out of poverty by recurrent cash handouts over the years, and in February the minimum wage was frozen for the first time since its introduction, remaining at a paltry HK$37.50 (US$4.80) per hour. There is no question that Covid-19 has hit the poor harder than the rich.

Other regions are not necessarily doing much better. While the US and Britain have higher minimum wages, at US$7.25 and £8.91 (US$12.40) per hour respectively, they are also struggling with issues of economic inequality. Equitable distribution of vaccines has been a problem in Europe this year, as well.

If the UN’s 193 members can find consensus around a set of development goals, a single nation or administrative region should be able to do so too. In Hong Kong, we of course have our disagreements, and we may even disagree on climate change priorities or housing policy. Yet we can surely all agree that our children should not be subjected to air pollution or domestic abuse, that education opportunities should be available to all and that housing is safe.

In a Harvard speech in 2007 calling for action on nuclear disarmament, Mikhail Gorbachev said: “If you don’t move forward, you begin to move backward.” It is crucial that social efforts should be targeted and ambitious, lest aimless and drifting governments are tugged along by a corporate sector, largely motivated by self-interest.

To this end, Hong Kong should establish a community-based body solely to nurture and monitor progress towards the Sustainable Development Goals, with a precise set of local, measurable targets. We need to demonstrate the can-do spirit.

It seems extraordinary that there are still wealthy regions of the world that cannot guarantee timely access to health care and affordable housing to all citizens.

In Singapore, the home ownership rate has reached 90.4 per cent. Meanwhile, Hong Kong’s rate has hovered around 50 per cent for the past 20 years, dipping to its lowest at 49.2 per cent in 2017 and 2018 before rebounding to 51.5 per cent in 2020. According to Demographia, Hong Kong has been the least affordable housing market for 11 consecutive years, and it now takes 20.7 years of saving an average household salary to buy a medium-sized apartment in the city.

Whether collective development goals are seriously pursued this decade will depend on the willingness of political factions to put aside narrow interests for the common good. There have been some positive signs of community cohesion during the pandemic. If we are to retain faith in a global society with shared principles, we must build on these positives and find areas where there may be agreement.