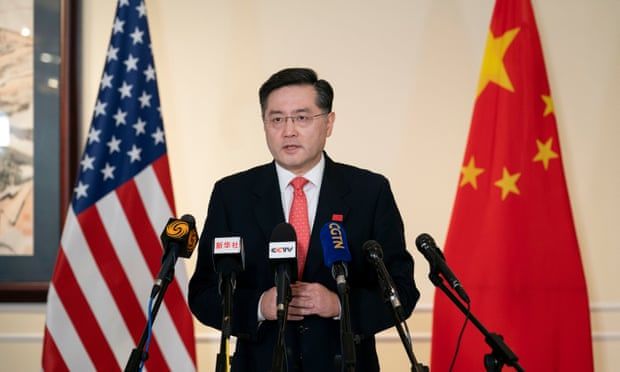 Tensions over the island’s place in the world continue to grow. Beijing considers Taiwan to be a breakaway province of China. In November the Chinese president, Xi Jinping, told Joe Biden that any support for Taiwanese independence from the US would be “like playing with fire” and that “those who play with fire will get burned”.

Beijing has been ratcheting up its pressure on the democratically ruled island in recent years. In October Xi vowed to realise “reunification” with Taiwan by peaceful means. But on Sunday China’s air force flew 39 warplanes into Taiwan’s air defence identification zone – the largest daily number since October.

The US and some of its allies have in the past few months advocated for Taiwan’s “meaningful participation in the UN system”, a move that angered China. The UK parliament’s foreign affairs committee reportedly plans to visit Taiwan next month.

Qin blamed the current state of affairs on the Taiwanese administration. He accused it of “seek[ing] its independence agenda by borrowing the support and the encouragement of the United States”. He added: “And the United States is playing the Taiwan card to contain China.”

Analysts say that although Qin’s warning to Washington is unusual, he also pointed out in the NPR interview that the bilateral ties constituted China’s “most important relationship”.

“Such a confrontation would risk a permanent rupture in the bilateral relationship,” said Ali Wyne, a senior analyst on US-China relations at Eurasia Group in Washington. “While China often avows that its ‘great rejuvenation’ is predicated upon Taiwan’s reunification with the mainland, there are probably few other steps Beijing could take that would undermine its long-term strategic prospects as greatly as attacking Taipei.”
#Joe Biden
Add Comment