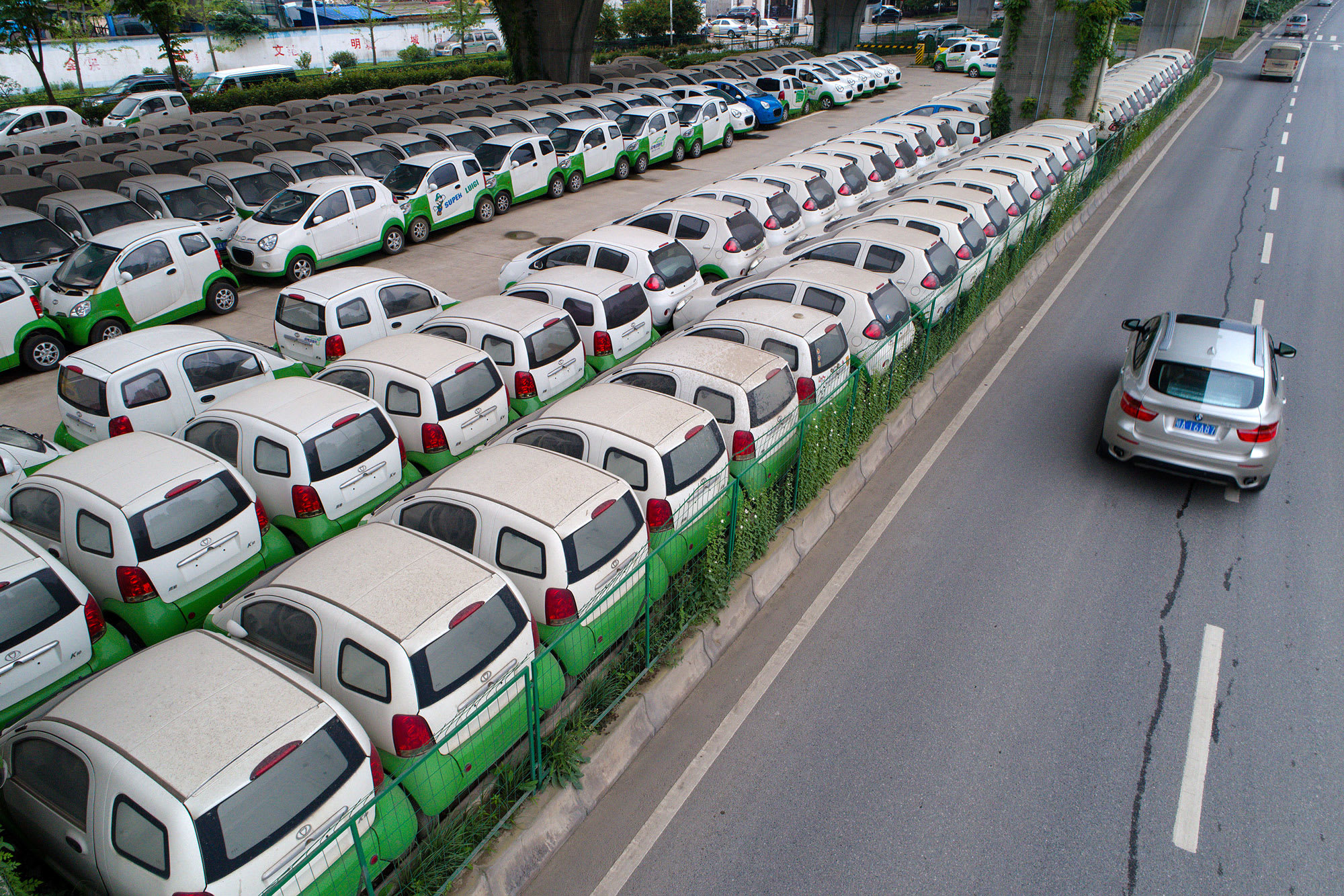 About a decade ago, Wan Gang, a former Audi engineer in Germany, convinced the Chinese government to roll out a national strategy to develop new energy vehicles and spend billions of dollars.

As a result, the country became the largest consumer of electric vehicles in the world and a leader in battery technology.

But China’s electric car companies are now struggling as economic growth slows and subsidies are phased out.

When an idea strikes a chord with national ambition in China, the result can be millions of dollars wasted and a handful of start-ups struggling to survive in a cooling economy.

In the last few years, venture capitalists rushed to pour billions of dollars into the emerging electric vehicle industry backed by the Chinese government.

So far, it’s less clear how that bet has paid off. Take a look at the recent headlines:

Shares of U.S.-listed Nio, arguably China’s closest competitor with Tesla, are down more than 50% this year to about $2.70 each.
In November, Alibaba-backed XPeng tapped its own Chairman and CEO He Xiaopeng for a $400 million investment round, in which electronics company Xiaomi participated as a strategic investor.

Shenzhen-based BYD, which counts Warren Buffett as an investor, said in late October that net profits, ex-items, fell 130.1% in the third quarter. The Hong Kong-listed shares are down 25% for the year so far.

These are some of the handful of survivors from Beijing’s efforts over the last decade to accelerate the creation of China’s own electric car.

Now, Chinese auto sales are in a slump, consumer subsidies for new energy vehicles are phasing out next year and economic growth is slowing.

“What was not in the business plans was that China would have its first fully blown automotive downturn in Chinese history,” he told CNBC in late November.

How it all started

Wan Gang was an engineer for Audi in Germany before he returned to China in the early 2000s. Within 10 years, he became China’s minister of Science and Technology, despite not being a member of the Chinese Communist Party.

Wan convinced the central government to roll out a national strategy for developing new energy vehicles and battery technology. Beijing was eager to jump at an opportunity to become a global leader in an emerging technology, which conveniently tied into efforts to combat pollution.

As a result, the central government spent at least 33.4 billion yuan in subsidies between 2009 and 2015, according to the Ministry of Finance.

At the height of the subsidy-driven boom, the number of new energy vehicles sold in 2014 more than quadrupled from the year before, and multiplied by more than four times in 2015 to more than 330,000 vehicles, according to data from China Automotive Industry Association accessed through Wind Information.

In 2016, the Ministry of Finance said it found at least five companies cheated the system of over 1 billion yuan. That year, new energy vehicle sales grew just 53%, data showed.

High levels of subsidy misuse are not uncommon in China.

Between 2001 and 2011, about half of Chinese companies receiving direct grant subsidies for research and development were non-compliant, using the funds for other things such as private consumption and investments with higher returns. That’s according to a forthcoming working paper from Philipp Boeing and Bettina Peters, both researchers at the ZEW – Leibniz Centre for European Economic Research. The study did not cover consumer subsidies.

The research did indicate that misuse of funds declined with time and that the actual effectiveness in Chinese government policy in spurring research and development, if monitored, increased and non-compliance was wiped out, Boeing said in an interview.

But he noted there is little impact on productivity in the long term, which is a core problem for China’s economy.

Some young companies that rode on China’s electric vehicle boom, however, are still confident in growth.

XPeng aims to reach breakeven in about two years, with the expectation the company is able to put about 150,000 vehicles on the road, Brian Gu, president and vice chairman of XPeng, said in an interview in late November. That’s about 10 times what the company has sold since it began deliveries last December for its first commercially available vehicle.

WM Motor’s Mitchell expects the company can break-even in the next 12 months, as the start-up puts greater effort into consumer marketing. The company is in the process of raising $1 billion, which he said would “fully finance” the automaker until a public offering.

Other companies are just starting to bring new electric vehicles to the market.

Aiways, a Shanghai-based start-up that touts its certification to sell to the European Union, announced in December it will begin deliveries of its U5 SUV. Guangzhou-based GAC Nio - a joint venture between the traditional automaker and the start-up - is set to reveal its first all-electric SUV under the Hycan brand on Friday.

Nio wasn’t available for comment ahead of the company’s annual product launch event on Saturday.

Meanwhile, the first “Made in China” Teslas are set to hit the market early next year at a lower price that vies with Nio.

“Looking at the last 10 years of Chinese government subsidies, we think their effect is more positive than negative,” said He Hui, senior researcher on China’s new energy policy at The International Council on Clean Transportation.

“We can’t say our new energy vehicles are number one,” she said. “But our batteries are.”
Add Comment