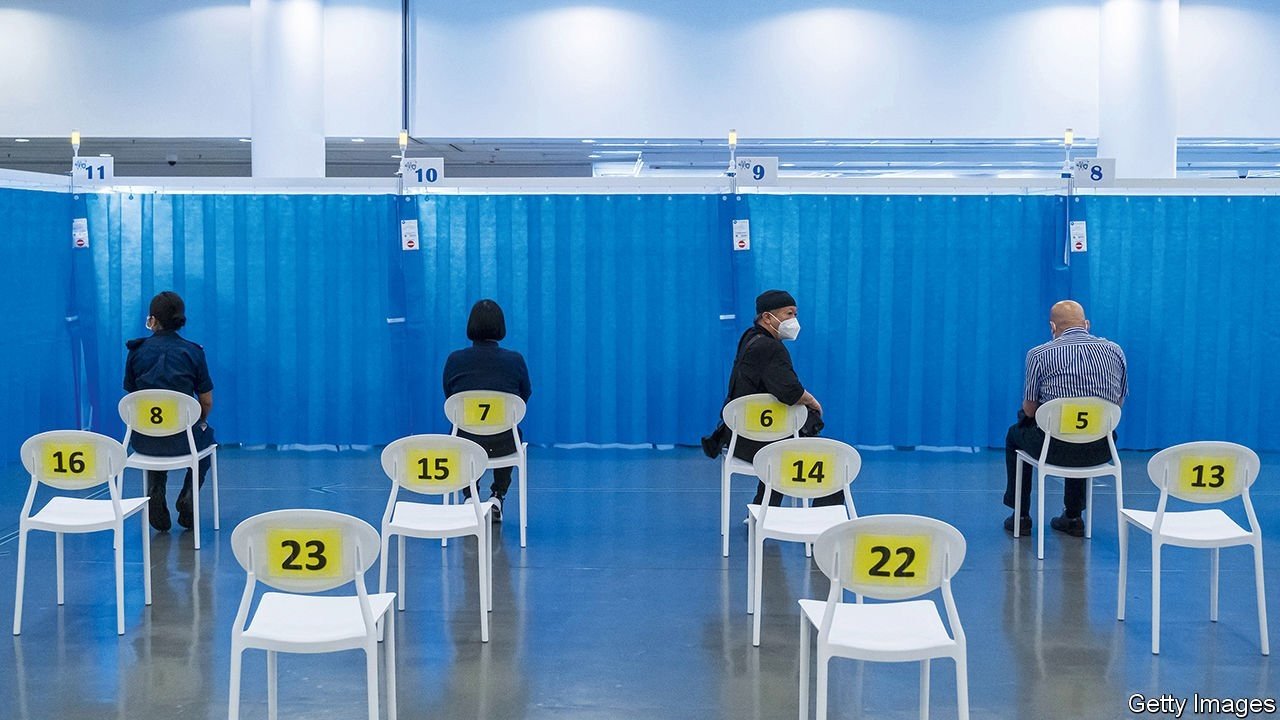 SINCE THE middle of March all Hong Kong residents over the age of 30 have been entitled to book a vaccination. They even have the luxury of a choice: between the Pfizer-BioNTech vaccine created in Germany or one produced by Sinovac, a Chinese firm. Yet despite plentiful supply only about 8% of the population have chosen to get a shot. One reason is rock-bottom trust in the government, the product of two years of political turmoil. It is only one way that the dismantling of Hong Kong’s freedoms has made controlling the virus more fraught.

The take-up of vaccinations in Hong Kong lags far behind that in comparable places such as Singapore, where about 20% of people have been vaccinated. A survey carried out in January, before the vaccination drive began, found that only 37% of Hong Kongers wanted a jab. Since then local media have kept count of people who die in the days and weeks after a vaccination, despite copious evidence that vaccination makes death less likely, not more so. Infection rates are fairly low, so people who worry about side effects feel they can afford to put off their shot. On April 15th the government said it was about to start allowing people aged 16-29 to get one.

The vaccine roll-out has become highly politicised. The big role given to Sinovac’s vaccine is controversial (people waiting to receive it are pictured). Sinovac has not published data from “phase-three” clinical trials in peer-reviewed journals, an important international standard. It appears to be less effective than the Pfizer-BioNTech and Moderna vaccines, which cut the risk of catching covid-19 by more than 90%. Trials of Sinovac’s jab find efficacy rates that rangefrom 83% to a little over 50%, the threshold above which the World Health Organisation deems a vaccine suitable for general use. Speaking at a conference on April 10th, Gao Fu, a Chinese health official, appeared to accept that the efficacy of China’s vaccines was not very high and that it might be wise to combine them with a dose of a different product (he later said his remarks had been misinterpreted). 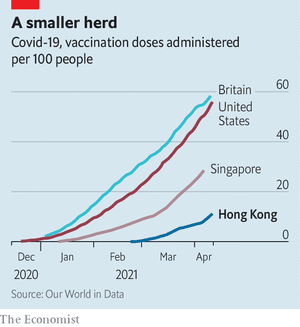 Hong Kong’s vaccine-approval committee was not asked to consider the Chinese jab’s efficacy in comparison to Pfizer-BioNTech’s (which is distributed in Hong Kong by Fosun Pharma, a Chinese company) or to any other vaccine that had been peer-reviewed, says Keiji Fukuda, one of the members of the committee. “The politicians have all got Sinovac and the medical experts have all got BioNTech: what does that tell you?” says a medical scientist in Hong Kong. China has made decisions about vaccinations trickier by saying it will expedite visa applications for people who prove they have received a Chinese-made inoculation; as a result some people with family or business in the mainland feel compelled to accept it. “About one-third who took Sinovac were coerced, another third did it for some sort of personal gain or to curry favour with someone and the final third just wanted to get vaccinated,” says another public-health specialist.

Tense politics has complicated Hong Kong’s response ever since the virus was first detected. In January 2020 Carrie Lam, the territory’s leader, argued against closing the border with the mainland, saying that doing so would be “discriminatory”. In response, 9,000 medical workers in a pro-democracy labour union went on strike. More than 60% of people surveyed by the Hong Kong Public Opinion Research Institute supported them.

In September the government offered free covid-19 tests to the entire population. That policy borrowed from mandatory citywide testing campaigns that had taken place in some parts of mainland China. Yet fewer than 1.8m Hong Kong residents accepted the screening, out of 7.5m. Refusing the test was a way of expressing dissatisfaction with the government. And some suspicious residents fretted that their DNA might end up in mainland China. Worries about surveillance have also made people wary of mobile-phone apps, which they are supposed to use for contact-tracing purposes by recording their details when they check into venues such as restaurants.

The perception that Hong Kong’s health officials are taking instruction from counterparts on the mainland continues to rankle. In December some travelled to Shenzhen to discuss ideas for detecting and containing the virus with authorities there. Since then, officials have taken to conducting what they have called “ambush-style lockdowns”, in which apartment blocks are cordoned off at short notice and everyone inside is tested.

A report published in February by researchers at three universities in Hong Kong argues that informal networks formed during pro-democracy protests in 2019 may have helped the city weather the first part of the pandemic. Pro-democracy groups organised bulk purchases of surgical masks and disinfectant. Families, friends and neighbours reminded each other to wear masks and socially distance, drawing on lessons from 2003, when SARS, a disease caused by another coronavirus, killed almost 300 people in the city.

Yet a sweeping security law passed in June 2020 has wrecked civil society. Most prominent pro-democracy activists in Hong Kong are now in jail or in exile. Few other people in Hong Kong have enough credibility to make locals overcome wariness towards vaccination. Pro-Beijing politicians are not much trusted. Lots of the celebrities made famous by Hong Kong’s entertainment industries—conscious that mainland China is their largest market—voiced support for the Communist Party during the protests in 2019. That has discredited them for many.

Most public-health experts have concerns about the way China’s jab has been promoted in Hong Kong but are scared to speak publicly about it, say three such individuals. They worry that discussing the efficacy of a Chinese vaccine will hurt their careers, or even be deemed a violation of the city’s new security law, which bans any act that seriously “undermines” the work of the local or central governments. When the Communist Party imposed that legislation last summer, Ms Lam said it aimed to help Hong Kong “get back to normal”. It is very far from that.