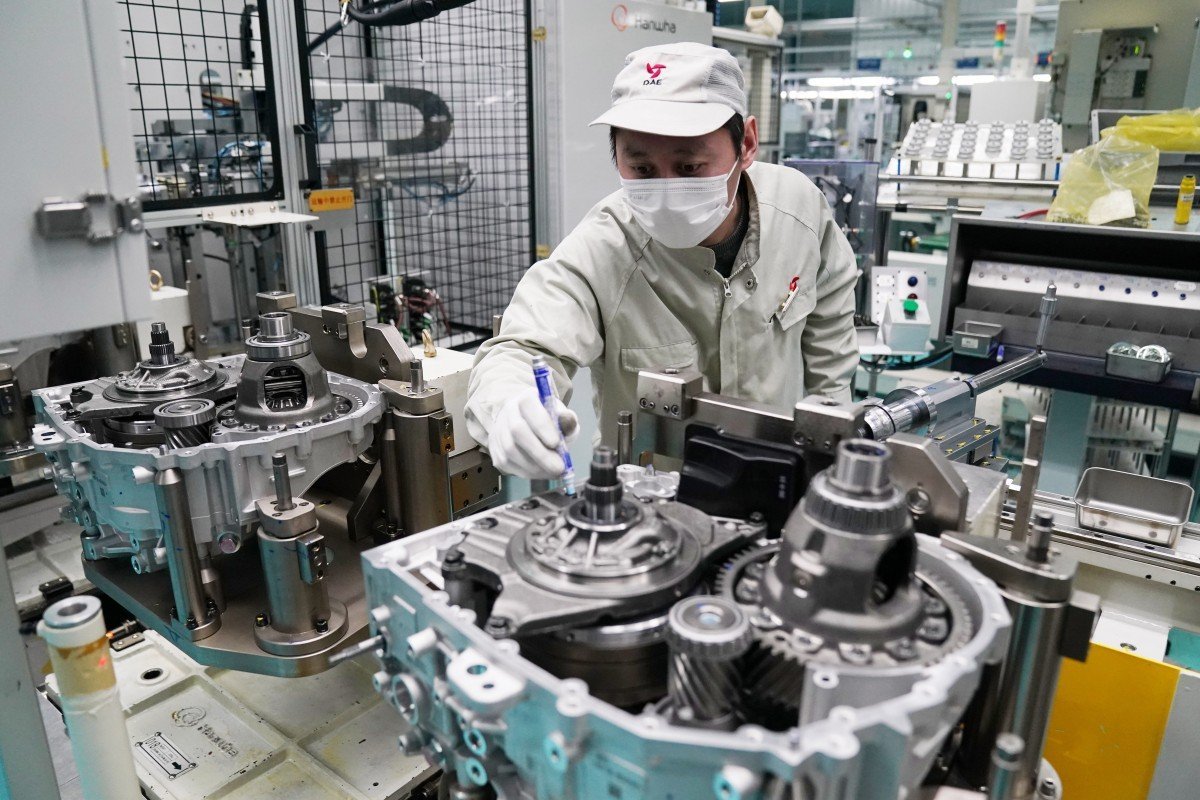 Caixin/Markit manufacturing purchasing managers index (PMI) plunged to 40.3 in February from 51.1 in January. Caixin survey, which focuses on smaller firms, mirrors huge drop in official PMI data, both of which show the impact of the coronavirus on manufacturers

A collapse in China’s manufacturing sector in February was confirmed on Monday, with a new survey of privately-owned producers emphasising the economic damage caused by the coronavirus epidemic.

The Caixin/Markit manufacturing purchasing managers’ Index (PMI), a gauge of sentiment among the country’s smaller factory operators, plunged to 40.3 in February from 51.1 in January.

The weak data will reinforce expectations that China could report negative growth in the first quarter of 2020 for the first time since the Cultural Revolution in the late-1960s and early-1970s. It will also renew calls for Beijing to take more aggressive steps to support the economy.

The survey was well below market expectations for a drop to 46.0 and marks the lowest reading since the survey began in April 2004. It was weaker than 40.9 in November 2008 amid the global financial crisis.

The Caixin index follows Saturday’s release of the official manufacturing PMI, which crashed to a record low of 35.7 in February, below the previous trough of 38.8 reached in November 2008 at the start of the global financial crisis, the National Bureau of Statistics said.

The survey for the official gauge covers more larger and state-owned firms, while the Caixin survey covers smaller firms. A reading below 50 means activity in the manufacturing sector is contracting. The further below 50 the index falls, the larger the contraction.

Factories in China traditionally close during the Lunar New Year holiday, but this year the shutdown was extended in an effort to contain the coronavirus outbreak. Manufacturers are now struggling to resume operations, with many workers unable to return due to continued travel restrictions.

“The sharp decline was due to stagnant economic activity across the country disrupted by the pneumonia epidemic caused by a novel coronavirus,” said Zhengsheng Zhong, chairman and chief economist at CEBM Group. “Both the sub-indices for output and total new orders plummeted into contractionary territory and hit their lowest levels on record.

“Supply chains came to a standstill as businesses extended the Lunar New Year holiday and multiple local governments implemented restrictions on transportation and the movement of people in efforts to control the epidemic.”

The data were collected between February 12 and 21, with Markit saying that the response rate was not affected by widespread factory shutdowns.

The survey showed that average delivery times rose by the fastest pace on record, with the total amount of new work received by Chinese manufacturers also falling by the steepest rate on record. Companies surveyed directly linked the first drop in sales since June last year to the coronavirus, while the level of new export work fell at one of the fastest rates on record, due to shipping restrictions and order cancellations.

“Difficulties in sourcing inputs contributed to the steepest decline in inventories of purchased items for just over 11 years. Concurrently, stocks of finished goods fell for the second month in a row, albeit only slightly,” read a note accompanying the survey’s release.

Firms also struggled to fill labour gaps, with manufacturing employment falling at the quickest rate ever recorded. Firms responded by lowering factory gate prices for the first time in three months, in an effort to boost sales.

“The latest PMI readings were in line with our downbeat expectations but will come as a shock to most analysts, who had anticipated a much smaller hit to business activity from the coronavirus outbreak,” said Julian Evans-Pritchard, China analyst at Capital Economics. “Particularly worrying is the large drop in employment, which dampens the prospects for a swift recovery.”

Even before the PMI data was released, Chinese growth was expected to weaken significantly in the first quarter due to the coronavirus from the 6.0 per cent growth in the fourth quarter, which was already the lowest growth rate in nearly 30 years, due in part to the effects of the trade war with the United States.

“In China, we estimate growth in first quarter real gross domestic product (GDP) could contract by 6 per cent – at a quarterly annualised rate – which is a dip to 3 per cent year-over-year growth,” said Tiffany Wilding, an economist at investment firm Pimco.

“The next-hardest-hit economies will likely be in Asia, especially Singapore, Malaysia and Vietnam in Southeast Asia, and Japan and South Korea in Northeast Asia. We expect economies in Europe and the US will also be affected, with Europe likely hit harder than the US given the region’s higher exposure to exports to China and the greater openness of its economy to global trade.”

Researchers at the East Asia Institute of the National University of Singapore, in a report released on Friday, predicted that the economy could contract by as much as 6.2 per cent in the first quarter.

Under such a scenario, GDP would need to grow by 9.0 per cent in each of the following three quarters to achieve the 5.6 per cent annual growth level required to double the size of the economy from its level in 2010, as per Beijing’s economic goals.