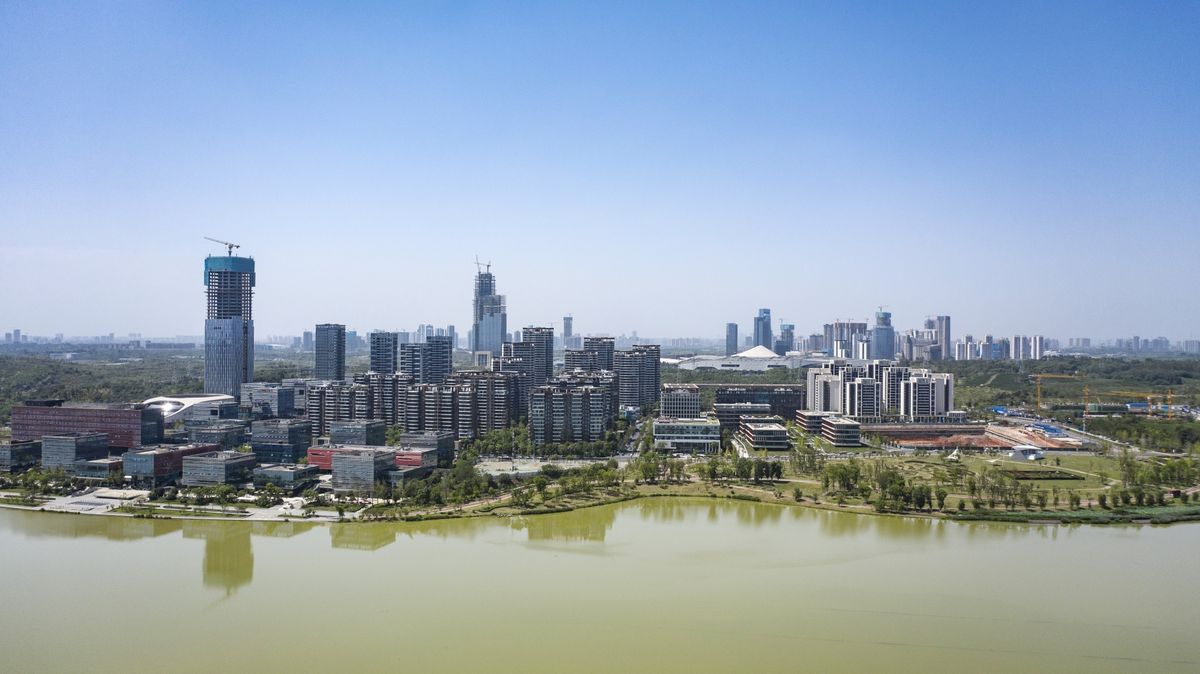 Just outside the southwestern city of Chengdu, China is building an urban paradise bigger than Houston. Visitors are greeted by a sea of manicured grass encircling a man-made lake, dotted with water lilies, that is almost the size of New York’s Central Park.

This is Tianfu Park City, one of hundreds of “eco city” developments taking over farms and rural land in China as the government tries to accommodate the 100 million people it had planned to move from villages into urban areas by 2020.

After decades of unbridled urbanization that allowed concrete high-rise suburbs to sprawl around its big cities, eating up farmland and creating pollution, China is trying to find a more sustainable way to grow and provide citizens with a better lifestyle.

“The air here is really good and wherever you go it’s green,” said a 56-year-old resident surnamed Fan, who moved to the area in 2013 when it was still a neglected suburb of Chengdu. “I don’t regret my decision at all, my apartment’s value has doubled.”

The Tianfu project was approved a year after Fan arrived, bringing an influx of government support that helped boost property prices. In the first half of 2019 alone, the city signed contracts for more than 300 billion yuan ($44 billion) of investment.

When major construction is completed this year, nearly 60% of the area will be dedicated to six artificial lakes, 30 parks and other green spaces. The population will be limited to 6.3 million by 2030 – a quarter of the size of China’s biggest cities, such as Shanghai.

“New cities are like experiments where the governments can easily test innovative ideas,” said Zheng Siqi, faculty director of the Massachusetts Institute of Technology’s Sustainable Urbanization Lab. “The new city does not need to deal with existing residents,” unlike when the government redevelops existing ones, Zheng said. 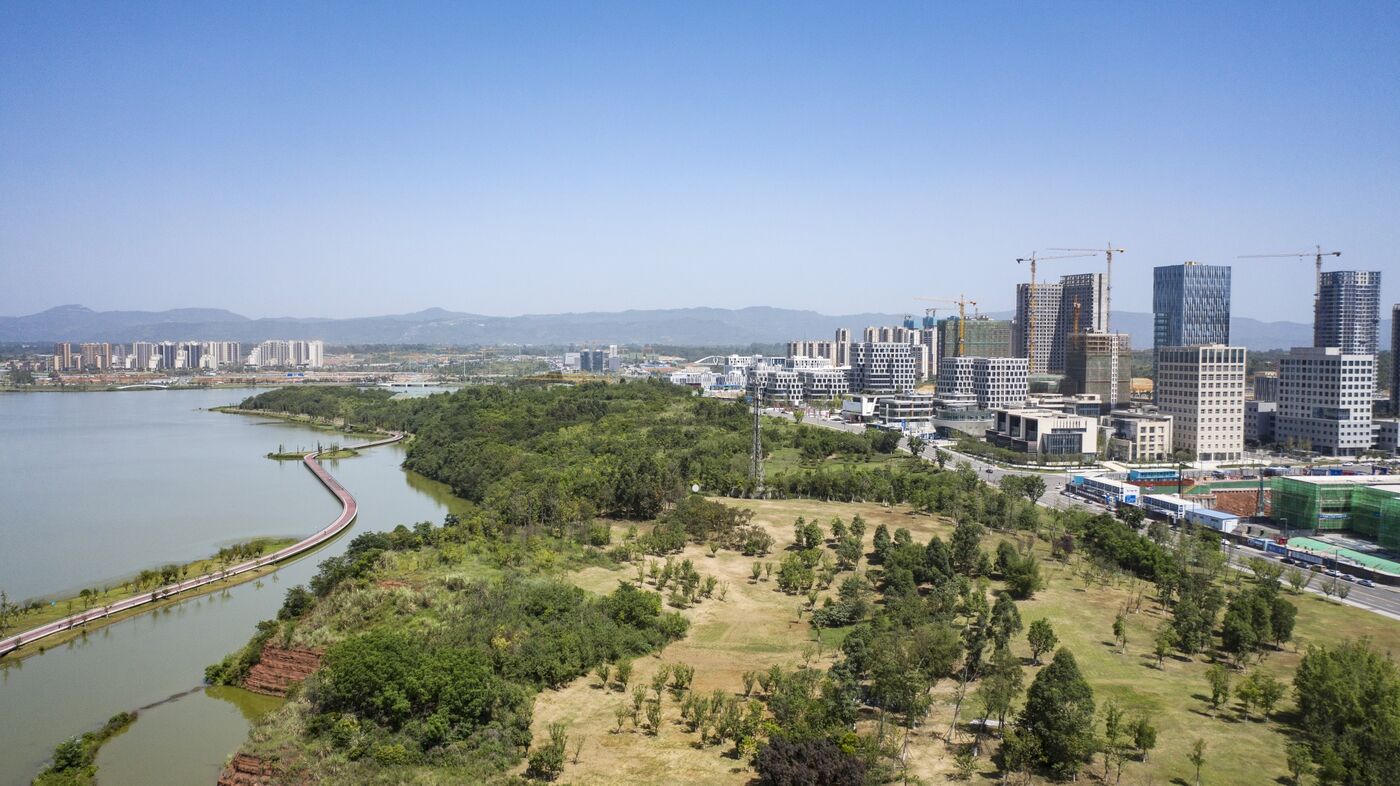 While Tianfu Park City includes hundreds of acres of parks and trees, some developments have struggled to attract tenants.

China’s green approach is designed to tackle two pressing environmental issues. Large-scale construction of urban infrastructure and residential housing has become one of the country’s biggest sources of greenhouse gases.

Realizing the nation’s urbanization goal could produce more than one gigaton of additional carbon dioxide, according to a study by researchers at the University of Maryland.

At the same time, both rural and urban environments have deteriorated. Most of China’s major cities suffer from filthy air and poor quality water. About 90% of China’s grasslands and 40% of its major wetlands are experiencing degradation, according to the Ministry of Ecology and Environment.

In 2012, President Xi Jinping began stressing his theory of an “eco-civilization,” where development takes environmental costs into consideration. The aspiration hasn’t always translated into concrete policies.

Tianfu has flourished because of Xi’s personal endorsement. In 2018, he visited Chengdu and remarked that its development should “highlight the characteristics of a park city.”

Local cadres quickly added “park city” to its official name and put up street banners proclaiming its “park city” status. A Park City Research Institute was established to help the project become “a globally famous and successful model” for urbanization.

Wu Changhua, senior researcher at Beijing-based think tank Center for China and Globalization, said China’s policies show the top leadership is determined to restore the environment, but that’s not always what motivates local bureaucrats. “A deeper driver could be lush subsidies and stimulus for economic growth,” she said. 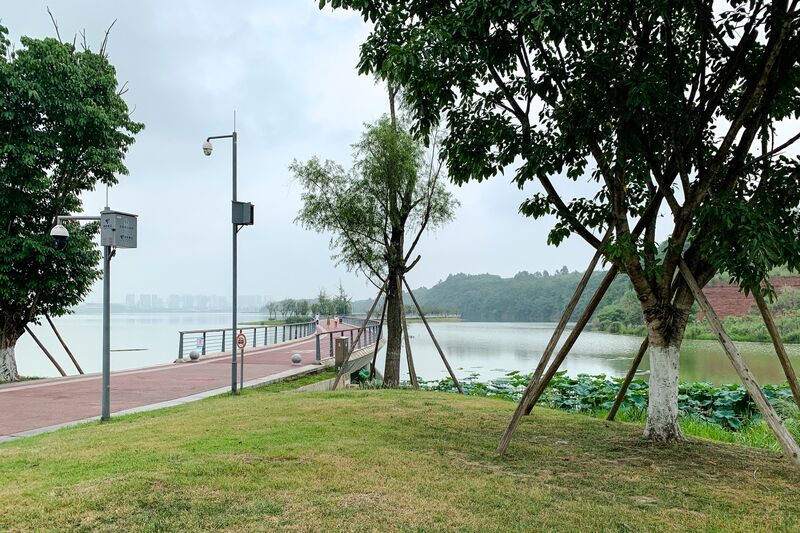 People walk along an almost empty lakeside jogging track in one of Tianfu’s new parks.

Of the hundreds of projects classified as “eco-city” developments, many don’t employ sustainable strategies such as energy efficient buildings, smart traffic layouts and renewable energy, said Deng Wu, an associate professor at the Department of Architecture and Built Environment at the University of Nottingham Ningbo China.

Developers often advertise their buildings as “eco-friendly” because they maintain stable temperature, humidity and oxygen levels indoors, but achieving that actually requires consuming large amounts of power, he said. “They equate ‘eco-friendly’ to being comfortable, but these projects have nothing to do with being eco-friendly, and can even have the opposite effect.”

To many residents, the beautiful landscaping and modern buildings in Tianfu embody the “eco city” ethos, and are a huge improvement from the poorly built cities of the past. In their view, clean air, water and streets are more important barometers of “eco-civilization” than buildings that conserve energy.

But cities need businesses and jobs to grow, not just pretty parks. In Tianfu’s central business district, some local companies lured by government subsidies and tax breaks have moved into the new skyscrapers, though the area is far from bustling. Global chains like Starbucks Corp. and Pizza Hut Inc. have opened outlets on the waterfront, where property agents hawk apartments to pedestrians, talking up the government’s investment in the area.

It’s too early to say if Tianfu will attract enough residents, said MIT’s Zheng. “There could be far more supply than demand if people don’t feel the need to move to a newly built city, especially where the existing city is not fully used yet,” she said, referring to Chengdu, which in recent years has become a popular destination for young people escaping high rents in places like Beijing and Shanghai. 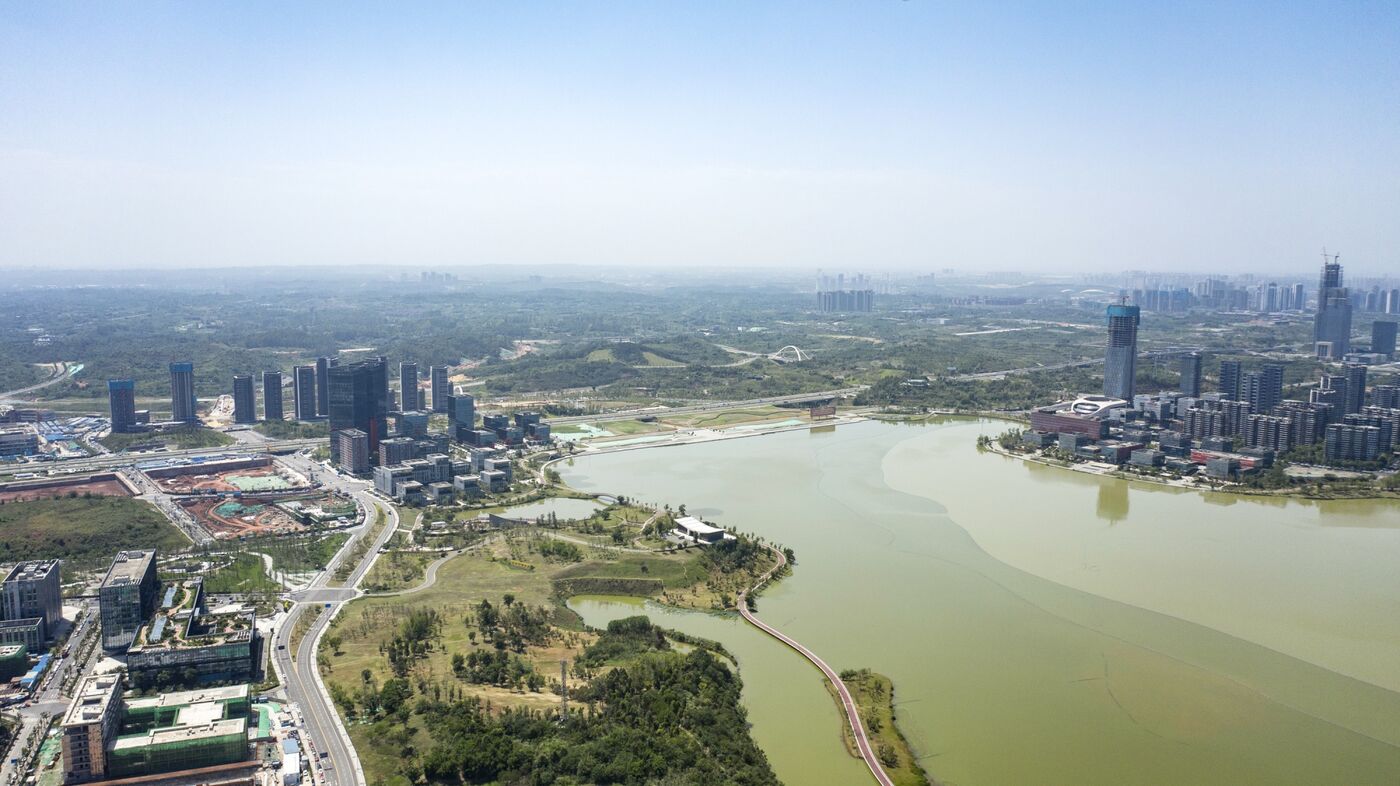 Tianfu’s artificial lakes and green spaces cover more than half the city.

It’s a story that’s played out in China before. Tianjin’s Binhai New City, along the east coast, was envisioned as a new financial powerhouse when former Premier Wen Jiabao launched the project more than 10 years ago.

Fifteen minutes’ drive down a newly built highway leading out of Tianfu, residents of Hongxiang village played mahjong on a Sunday afternoon in July, chatting about the metropolis rising nearby.

Surrounded by paddy fields and bamboo forests, they wondered when their village would be demolished to make room for Tianfu and whether they would be compensated for relinquishing homes that have been passed down for generations.

A 67-year-old farmer, who gave her last name as Zhou, worried that she wouldn’t be eligible for a pension or health care in the city, even though she would have lost her only means of support.

Wang Xuelian, a 33-year-old mother of two, was puzzled by the whole notion of an eco-city. “Every day when I open my window I get to see nature. I don’t know why they want to demolish it to build some fake greenness,” she said.