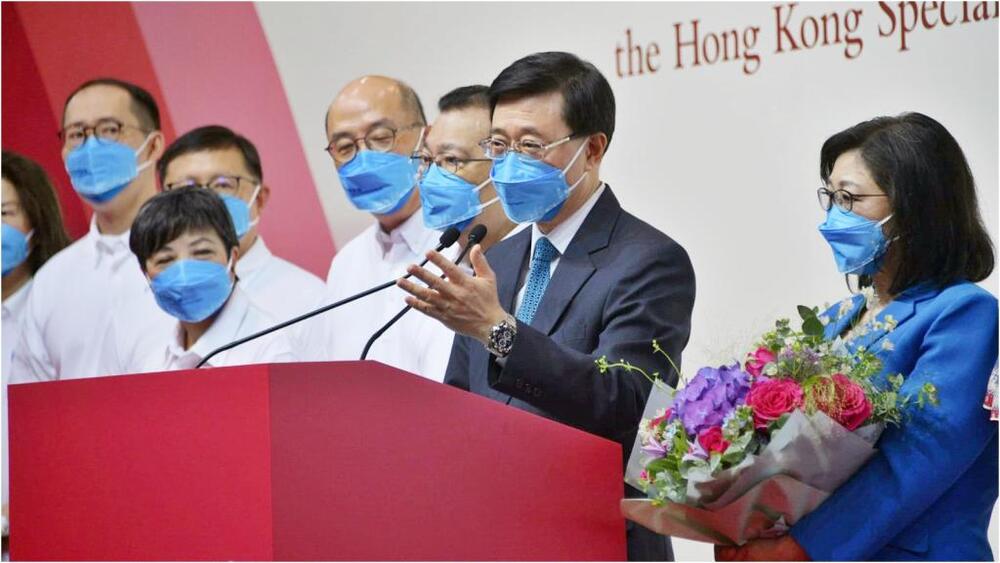 China is installing a career security official as the new leader of Hong Kong in the culmination of a sweeping political transformation that has gutted any opposition in the Asian financial center and placed it ever more firmly under Beijing's control.
John Lee, formerly the city's No. 2 official, is the only candidate Sunday in CE Election. Well over half of the 1,500-member Election Committee that selects the chief executive has already endorsed him and he needs only a simple majority to win.

Lee will replace Carrie Lam on July 1. Her 5-year term was marked by Hong Kong's most tumultuous period since the former British colony was returned to China in 1997.

The election follows major changes to Hong Kong's electoral laws last year to ensure that only ``patriots'' loyal to Beijing can hold office.

Lee's rise grew out of massive pro-democracy protests in 2019 that spiraled into violent clashes. As security secretary, he led the campaign to confront protesters with tear gas and rubber bullets, then rounded many of them up for arrest later.

Lam implemented Beijing's orders and was widely seen as the face of the crackdown. But the career bureaucrat still seemed out of step with China's hardline president and Communist Party leader Xi Jinping.

For her successor, Beijing opted for Lee, a former top police official and staunch advocate of the new National Security Law that outlaws subversion, secession, terrorism and collusion with foreign forces. More than 150 activists and others have been arrested since its implementation.

Following passage of the law in 2020, the United States sanctioned Lee, Lam and other Hong Kong and mainland Chinese government officials, for ``undermining Hong Kong's autonomy and restricting the freedom of expression or assembly.''

Almost all government critics have been jailed, fled abroad or been intimidated into silence. Thousands of residents have voted with their feet, with many professionals and others leaving the city of 7.4 million people.

Lee has tried to soften his public image since emerging as the sole candidate for chief executive. He started his brief remarks Friday with a childhood anecdote that evoked his humble origins, describing his father saving money to buy a television, and family and neighbors gathering to watch it.

``Back then, it wasn't an easy thing to buy a TV set,`` he said. ``In general, it was already not bad if you had a radio. So we were very happy, every time after eating, we would sit down and feel the warmth of togetherness watching TV.''

The intensity of the 2019 protests appeared to have caught Beijing by surprise, prompting the imposition of the National Security Law the following year and the reorganization of the legislature to put pro-Beijing forces firmly in charge in 2021.

While Lee has said he would boost Hong Kong's competitiveness to ensure it remains ``a gateway and bridge between our country and the world,'' his selection leaves little question that maintaining political stability is the priority.

Hong Kong's once thriving free press has taken a beating, with the pro-democracy newspaper Apple Daily shuttered and its founder, Jimmy Lai, in jail.

Fearing political repercussions, universities have cut ties with their student organizations, while the government has severed relations with the largest teacher's union.

People in Hong Kong still have greater freedoms than their counterparts in mainland China, but any hopes for greater democracy have been snuffed out and replaced by concern that the city is increasingly becoming like other Chinese cities.
Add Comment