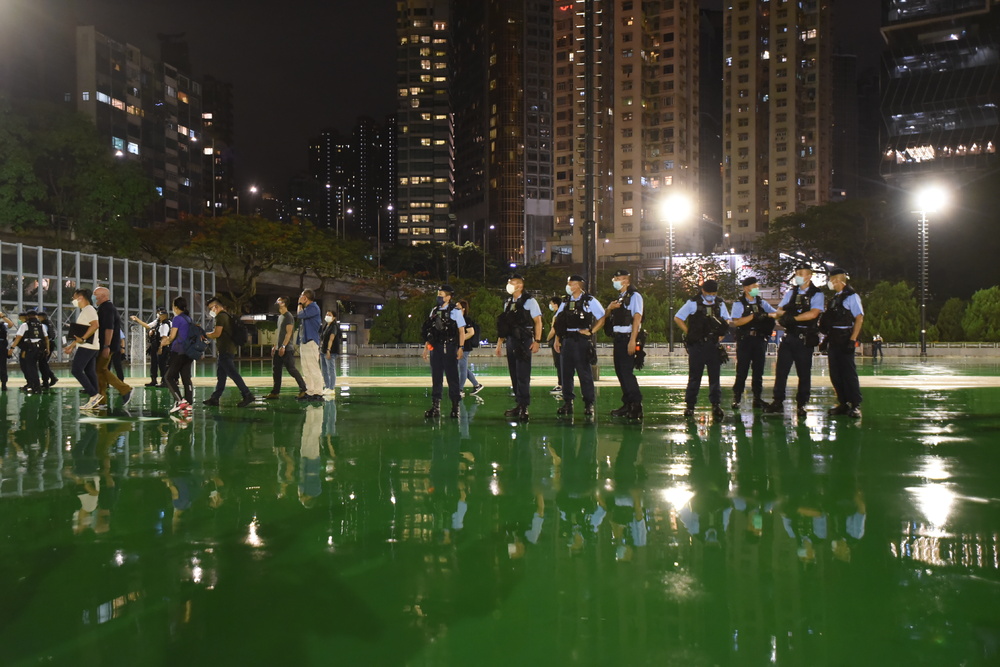 There was heightened security around Beijing's Tiananmen Square Saturday, anniversary of the bloody 1989 crackdown, while police in Hong Kong warned people not to gather as China strives to remove all reminders of the events of June 4.

Discussion of the crackdown is highly sensitive to China's communist leadership.

It has gone to exhaustive lengths to erase Tiananmen from collective memory, omitting it from history textbooks and censoring online discussion.

On June 4, 1989, the government sent troops and tanks to break up peaceful protests, crushing a weeks-long wave of demonstrations calling for political change and curbs on official corruption.

Hundreds, by some estimates more than 1,000, were killed in the crackdown.

On Saturday, authorities in Beijing had set up facial recognition devices at roads leading to the square and stopped passersby to check their identification, including a large group of cyclists who were made to individually scan their ID cards.

The police presence in the area was noticeably heavier than normal, with two to three times the regular number of officers visible on Saturday morning.

References to June 4 were scrubbed from Chinese social media platforms.

On Twitter, which is blocked in China, US Secretary of State Antony Blinken said it had been 33 years "since the world watched brave demonstrators and bystanders peacefully demand democracy in Tiananmen Square".

"Despite the removal of memorials and attempts to erase history, we honor their memory by promoting respect for human rights wherever threatened," he wrote.

Semi-autonomous Hong Kong had been the one place in China where large-scale remembrance was still tolerated -- until two years ago when Beijing imposed a national security law to snuff out dissent after huge pro-democracy protests in 2019.

The drive to remove all trace of Tiananmen from the city has intensified over the past year in particular.

Authorities warned the public on Friday that "participating in an unauthorised assembly" risked breaking the law and carried a maximum penalty of five years' imprisonment.

Large parts of Victoria Park, the site of a once annual candlelit vigil attended by tens of thousands, were closed off on the eve of the anniversary.

In the nearby bustling Causeway Bay shopping district, a performance artist who whittled a potato into the shape of a candle and held a lighter to it was surrounded by more than a dozen officers and taken away in a police van, an AFP reporter saw.

Police later said they had arrested a 31-year-old woman for "disorderly conduct in a public place".

The Hong Kong Alliance, the vigil's organiser, has been prosecuted as a "foreign agent" over incitement to subversion.

Last September, its leaders were arrested, their museum shuttered after a police raid and their digital records of the crackdown erased.

The lack of clarity over where exactly Hong Kong's red lines lie has made many fall in line.

Six universities have removed June 4 monuments that had stood on their campuses for years. Just before Christmas last year, three were whisked away within 48 hours.

Annual Catholic memorial masses, one of the last ways for Hongkongers to come together publicly to remember, were cancelled this year, with organisers saying they did not want to breach the law.

Commemoration events in Macau were also cancelled, with organisers blaming the "worsening environment in Macau politics".

The space for remembering the crackdown publicly now lies outside China, with exiled dissidents setting up their own museums in the United States and activists planning to resurrect the Pillar of Shame, one of the removed university statues, in Taiwan.

The US and Australian Consulate Generals in Hong Kong on Saturday posted Tiananmen tributes on social media, with the former changing its Facebook cover photo to the Pillar.

On June 4, vigils will be held globally, with rights group Amnesty International coordinating candlelit ones in 20 cities "to demand justice and show solidarity for Hong Kong".

"The ability to commemorate the June 4 massacre has been drastically deteriorating in Hong Kong," Kacey Wong, an artist who fled to Taiwan, told AFP at an exhibition in Taipei.

"Coming to Taiwan and having the ability once again to be human -- to voice our concern, to mourn the dead, it's a privilege. Totally a privilege to be able to openly, in a public space together, to mourn."