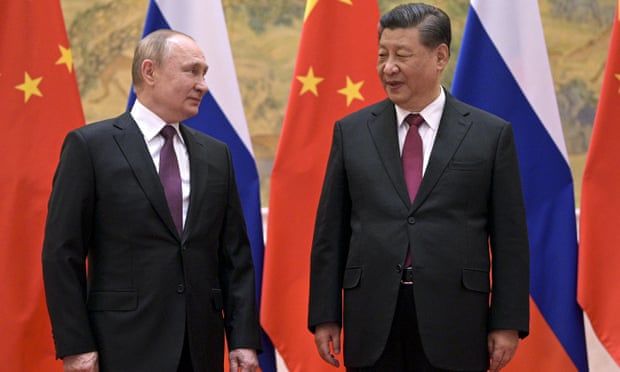 In just a few days, Russia’s invasion of Ukraine has upended decades of international relations thinking and practices. Nothing will be the same as before. Even the 5,000-word statement on “international relations in a new era” issued by China and Russia just a month ago in Beijing – to make the world safe for autocracy – has been overtaken by events. In this ugly Russian quagmire, China’s role and behaviour merit close attention, not least as we wonder whether Ukraine today may be Taiwan tomorrow.

China and Russia have been getting closer for some time. The binds are visible in bilateral trade, which has more than doubled since 2015 to almost $150bn. China is Russia’s biggest trade partner. While Russia is almost a rounding error in China’s global exports, the two countries collaborate in military exercises, regional security arrangements and technology trade. These binds go some way to counter other differences and long-standing sources of mistrust, for example over Russian far east and central Asia. Yet, the biggest bind of all is geopolitics.

Headed by control-obsessed dictators pledged to remain in power and protect their elites, they have both been gifted political opportunities created by, for example, the long tail of the 2008 “western” financial crisis, Brexit and European political weakness, Donald Trump, and Covid management issues in many democracies. They are joined at the hip in their pursuit of an anti-US and anti-western agenda in which they want to reshape the world order, including by force.

Putin’s awkward and brutal invasion of Ukraine doesn’t change any of this but it has changed the Sino-Russian relationship consummated at the Olympics on 4 February, and caused China consternation. Considerable speculation focuses on what Xi Jinping knew. It is hard to believe Xi was not forewarned about something, especially as the US tried to brief him with intelligence only to be rebuffed. We also know Russian troops were subsequently moved from the far east to Ukraine, and China is thought to have bought back previously released oil into its Strategic Petroleum Reserve.

Whatever the reality, China is deemed to have been complicit, at least by supporting Russia and backing it since, leaving it uncomfortably on a spiky fence.

Xi won’t back away from Putin because to do so would lead to much embarrassment and humiliation at home – a non-starter, especially in this key year ending with the 20th Party Congress. Yet, standing by Putin, and supporting overtly the weak Russian economy associates China firmly with a pariah state and erodes such trust and credibility in China’s statecraft. China’s list of friends globally isn’t that big or impressive anyway.

With strong leverage over Russia now, China can help its beleaguered neighbour, which, with its main banks excluded from the global financial system, its foreign exchange reserves frozen, and firms and persons subject to sanctions and asset freezes, has become a vassal state of China. It can buy much more energy and resources, and subject to ubiquitous sanctions laws, make loans, provide funds via currency swap agreements, trade in yuan, and supply semiconductors and other technology goods.

Yet, China will have to be careful to calibrate an image which isn’t overly accommodating, and reminds the world both that it can be an agent for important public goods, such as peace-broking in Ukraine, and that it wants the global system to remain relatively open.

Remember that, unlike Russia, China’s ambitions depend on a relatively open world economy in trade and technology, and on global and regional institutions which it would like to re-shape to suit its own interests. This is all at risk now if democracy-supporting nations choose to push a Russia-supporting China further away – or if China doubles down to insulate itself. China was certainly shocked how the EU, in particular, and the US came together purposefully and forcefully to freeze Russia out of the system. China’s continuing dependency on key western technologies and markets remains, despite acts of decoupling and self-reliance. It would certainly not want to risk being in the cross-hairs of a Russia-type financial war over, for example, Taiwan.

Beijing regards Taiwan as an inalienable part of China, and so its recent proclamation of support for the territorial integrity of Ukraine and others should not be taken at face value. China has never ruled out taking Taiwan by force, but Russia’s invasion of Ukraine, if anything, makes comparable Chinese action over Taiwan less, rather than more, likely.

From a rational standpoint at least, China will surely note that in war, best laid plans do go awry, resistance by people desperate for their country is a deserving cliche, and the US Pacific fleet and other Quad forces are close. It will be strongly aware, moreover, that “western” and other global economic and financial pushback is anything but a spent force and potentially highly effective. If Russia, as basically a commodity producer, is so sensitive to financial war, then China, as an economic colossus with strong dependencies, is at even bigger risk. Note also that Japan has revived a debate about taking US nuclear weapons, and ended the policy of ambiguity over Taiwan’s political status.

China’s new Russia relationship remains but it has changed radically. It now has high leverage over Russia but, by close association, little to gain globally and much to lose. Xi has no good options, and difficult choices to make as he tries to walk the line between supporting Russia and rebuilding friendly relations with the west. We need to remain on guard against thinking China’s totalitarian leader will be different from what Russia’s always was.