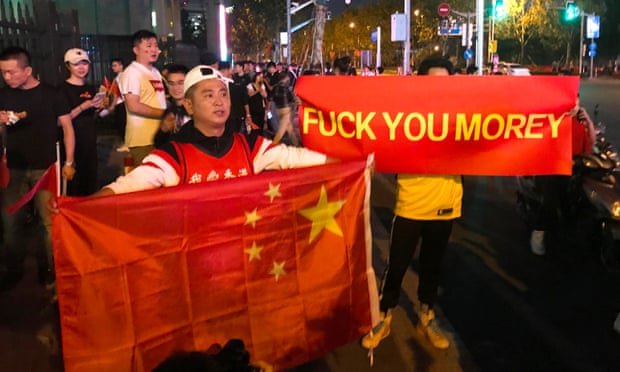 Chinese streaming giant Tencent has stopped live broadcasts of games by the NBA’s Philadelphia 76ers in apparent protest at their new president Daryl Morey, who sparked a row by voicing support for Hong Kong protesters last year.
Tencent has been offering text updates only for Sixers games as well as those involving the Houston Rockets, Morey’s former employer. It also refused to screen Rockets games last season.

State broadcaster CCTV, which holds China’s exclusive TV rights for the NBA, has not aired any games since the season opened on 22 December.

Tencent’s refusal to stream Sixers and Rockets games, and CCTV’s continued black-out, extends a year-long stand-off in the NBA’s biggest international market that has cost it hundreds of millions of dollars.

Morey, then the Rockets’ general manager, tweeted “Fight for Freedom, stand with Hong Kong” in October 2019, referring to the pro-democracy protests that Beijing calls separatist and seditious.

When the NBA backed Morey’s right to free speech, CCTV responded by pulling broadcasts, although it made a “goodwill” gesture by airing an NBA finals game in October.

Tencent has continued streaming games, but only text updates were available for the Sixers’ season-opening win over the Washington Wizards on 23 December.

Two other Sixers games over the weekend – against the New York Knicks and Cleveland Cavaliers – also had text updates.

Rockets games remain text-only this season, despite the popularity in China of Yao Ming’s former team.

Morey, who joined the 76ers in early November, told ESPN last week that he once feared his tweet supporting Hong Kong activists could end his NBA career.

However, he said he remained “very comfortable with what I did” even though he didn’t anticipate the outrage he would face from China.

Separately, the NBA fined Morey $50,000 on Monday for a tweet praising Rockets star James Harden, who has indicated he would accept a deal to join the 76ers.

The ongoing row appeared to have thawed when CCTV announced in October that it would air Game 5 of the NBA finals between the Los Angeles Lakers and Miami Heat – the first time that the league would appear on the network since the rift started.

State television made an on-air announcement that the game would be broadcast; the network’s web site had a preview of the game, including a photo of the Lakers’ LeBron James and Miami’s Jimmy Butler.

“During the recent Chinese National Day and Mid-Autumn Festival celebrations, the NBA sent their well wishes to fans in China,” CCTV said in a statement. “We also took note of the league has been continuously delivering goodwill [to China], particularly making positive contributions to Chinese people’s fight against Covid-19 pandemic.”

At All-Star weekend this year, NBA commissioner Adam Silver said it was possible the league could lose as much as $400m in revenue this year because of the strained relationship with the Chinese.

And that estimate preceded the costly shutdown because of the coronavirus pandemic, another massive financial blow that forced the league to cancel about 15% of its regular-season games. The league wound up salvaging the season by moving into a bubble at Walt Disney World, yet another big expense for games that took place without fans present – meaning no ticket, concession or souvenir revenue.
#COVID-19  #Covid  #Coronavirus
Add Comment