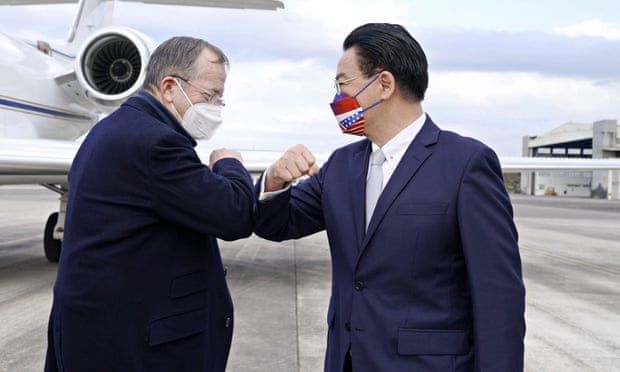 China denounces visit by US delegation to Taiwan as tensions simmer

Beijing reacts angrily to the visit by former US top security officials to Chinese-claimed Taiwan amid fears of a possible conflict in the region
China has denounced a visit by a US delegation to Taiwan as the island’s president Tsai Ing-wen vowed to work more closely with allies in response to what she called China’s growing military threat.

The delegation of former US top security and defence officials has been sent by president Joe Biden and is visiting Chinese-claimed Taiwan against the backdrop of Russia’s invasion of Ukraine, which is being closely watched on the democratic island.

“The attempt by the US to show support to Taiwan will be in vain, no matter who the US sends,” Chinese foreign ministry spokesperson Wang Wenbin said in Beijing on Wednesday.

“The Chinese people are firmly determined and resolved to defend national sovereignty and territorial integrity,” he said.

Posts on social media accounts for state media tabloid the Global Times offered reactions to the US visit. “It is an obvious provocation. Let’s keep calm and don’t be fooled. They are waiting for China to jump into the trap,” one commenter wrote.

Former chairman of the US joint chiefs of staff Mike Mullen, who is leading the American delegation, said collaboration between the US and Taiwan is stronger and more expansive than ever before.

“The United States will continue to oppose any unilateral changes to the status quo and will continue to support a peaceful resolution of cross-strait issues, consistent with the wishes and best interests of the people of Taiwan,” Mullen told Tsai in a meeting broadcast live.

“I do hope by being here with you, we can reassure you and your people, as well as our allies and partners in the region, that the United States stands firm behind its commitments.”

Taiwan, claimed by China as its own territory, is on alert in case Beijing tries to use the Ukraine crisis as an opportunity to make a move on the island, though the government has reported no unusual Chinese activity.

China has been sending military aircraft into Taiwan’s air defense identification zone on a near-daily basis, and on Saturday, China Defense Ministry protested the passage of the guided-missile destroyer USS Ralph Johnson through the Taiwan Strait.

China routinely protests against US contact with Taiwan’s government and announced in November that its military conducted air and naval readiness patrols in the direction of the Taiwan Strait after five US lawmakers met with Tsai on an unannounced one-day visit.

Taiwan has vowed to defend itself if attacked.

“China’s military threat to the Taiwan Strait and to the region continues to rise,” Tsai told the US delegation.

“We look forward to working even more closely with the US and other stakeholders in the region, collectively responding to challenges and unilateral actions that could impact security, in order to maintain regional peace and stability,” she said.
#Joe Biden  #Johnson
Add Comment