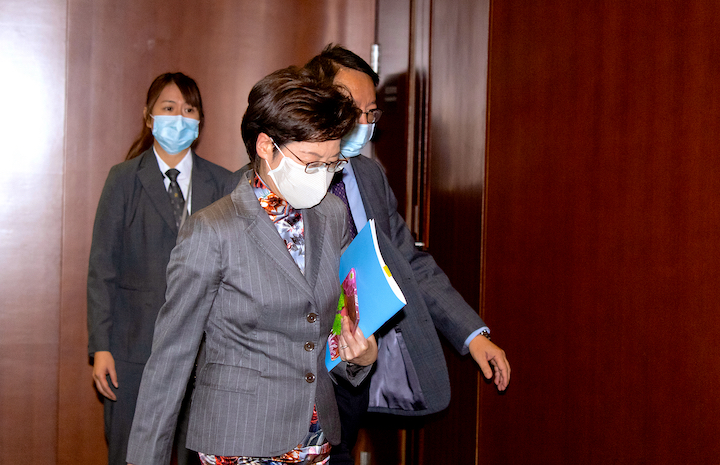 China’s top legislative body postponed a vote on a proposal to impose an anti-sanctions law on Hong Kong, delaying a move that could put global firms in the cross-hairs of a conflict between the world’s two largest economies.
The National People’s Congress Standing Committee ended a closed-door session Friday in Beijing without announcing the passage of a resolution adding the legislation to Hong Kong’s charter. Tam Yiu-chung, a local delegate to the body, later told reporters that the vote had been delayed pending further study, media outlets including Now TV said.

The additional review time would make the law more effective, Tam said, without saying when the law would be passed. The central government “hopes to listen to further views on the matter,” the South China Morning Post newspaper reported separately, citing a person familiar with the matter.

The move puts on hold one source of concern for Hong Kong’s financial markets, which have been battered by a wave of Chinese government crackdowns on sectors from technology to education. The anti-sanctions law that China passed in June to retaliate against the U.S. sanctions gives the government broad powers to seize assets from entities that implement such measures.

“The government always knew it was a big blow, but they just don’t want to deliver it now because of the ongoing regulatory changes they’ve been pushing out,” said Dongshu Liu, an assistant professor specializing in Chinese politics at the City University of Hong Kong. “It will eventually pass. It’s more of a political move.”

Hong Kong’s Hang Seng Index has tumbled 19% over the past six months, the third-steepest decline among global benchmarks tracked by Bloomberg. The city’s currency has also faced selling pressure, moving toward the center of its trading band against the U.S. dollar after sitting at the strong end as recently as November.

The city’s government said in a statement Friday that China’s legislature makes decisions on Hong Kong matters “based on the interests of the city,” and that it supports those decisions. Hong Kong’s “status as an international financial center is as robust as ever,” it added.

The central government will send a delegation next week to introduce its latest five-year plan, said the statement, which did not mention the anti-sanctions law.

The U.S. flagged that China could apply its anti-sanctions law to Hong Kong when President Joe Biden’s administration warned businesses about the growing risk of operating in the city. In China, the reciprocal sanctions have yet to make an impact due to the U.S. dollar’s dominance in the global financial system.
#Joe Biden
Add Comment