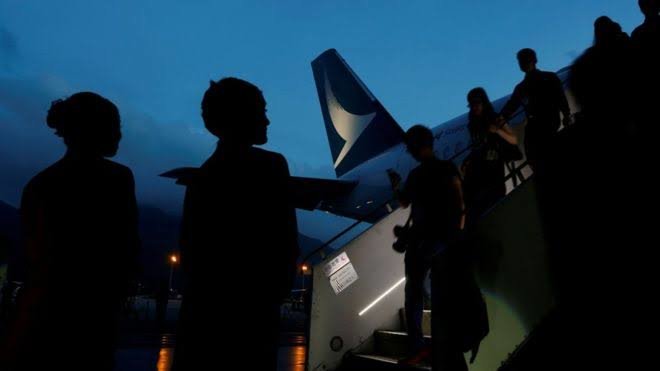 China’s civil aviation authority said Friday it issued a major aviation safety risk warning to Hong Kong-based Cathay for failing to take appropriate action, and ordered the carrier to ban all employees who supported or joined the recent protests from flying to the mainland starting Saturday.

Cathay’s actions, or lack thereof “have led to a severe threat to aviation safety, created negative social impact and increased the risk of flying from Hong Kong to the mainland,” the Civil Aviation Administration of China said in the statement.

For Cathay, controlled by the U.K.’s Swire family, the directive forces it to choose between fueling the wrath of its workers or those of China -- possibly the company’s most important market. Though the carrier doesn’t disclose a breakdown of its mainland China business, flights originating from there and Hong Kong account for about half of the firm’s revenue.

The Chinese authority also ordered Cathay to submit information about all crew members flying to the mainland for verification and authorization starting Sunday. The carrier will also be required to submit a plan for boosting internal controls, flight safety and security by Aug. 15, CAAC said.

The airline is treating the CAAC’s directives very seriously, a spokesperson said. The company doesn’t tolerate any behavior that may affect aviation safety, the representative said, reiterating earlier comments.

Cathay, one of the most high-profile brands in Hong Kong, became a visible target for Beijing this week after many of its employees took part in a general strike on Monday that resulted in the cancellation of hundreds of flights. One of the company’s pilots was among the dozens of people charged in recent weeks because of the protest, according to the South China Morning Post.

The actions of Cathay’s employees prompted the English-language Global Times, a nationalist paper published by the Communist Party, to warn this week the company would “pay a painful price.”

Mounting scrutiny from state media prompted Cathay, which counts government-run Air China Ltd. as its second-largest shareholder, to say on Friday -- before the CAAC statement -- that while it supports the “one country, two systems” principle governing Hong Kong, it doesn’t condone activities that may jeopardize the city’s stability or impact aviation safety.

“The personal behavior of individual employees does not represent the company’s position,” it said in that statement. “There is zero tolerance to any inappropriate and unprofessional behavior that may affect aviation safety. ”

While Cathay has already warned the unrest affected ticket sales in July and is hurting future bookings, the economic fallout has stretched far beyond the airline. Hong Kong’s gross domestic product contracted in the second quarter from the previous three months, leaving open the prospect of a technical recession if the protests continue.