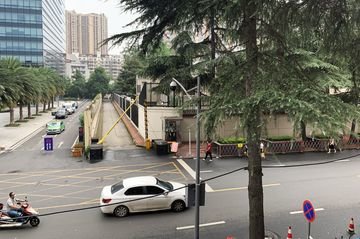 China ordered the U.S. to close its consulate in the southwestern city of Chengdu, after the American government forced China to leave its mission in Houston earlier this week.
“The measure taken by China is a legitimate and necessary response to the unjustified act by the U.S.,” the Chinese Foreign Ministry said in a statement Friday.

The tit-for-tat closures are one of the biggest threats in years to the increasingly fraught relationship between the U.S. and China, which has worsened in recent months on fronts ranging from trade to the early handling of the coronavirus pandemic.

The Chinese Foreign Ministry said it made specific requirements on the ceasing of all operations and events by the consulate.

The Chengdu mission, which opened in 1985, covers Sichuan, Yunnan, Guizhou and Chongqing in the country’s southwest.

The consulate also serves as a key U.S. listening post for developments in Tibet, where Communist Party efforts to suppress dissent has long been a focus of tensions between China and the West.

U.S. President Donald Trump said on Thursday that the trade accord with China -- one of the few things holding bilateral ties together -- means “much less to me” because of what he called that country’s role in the spread of the coronavirus.

Earlier, Chinese Foreign Ministry spokesman Wang Wenbin warned the U.S. to think “carefully” about where the relationship was heading in response to a question about the future of the deal.

“The current situation in China-U.S. relations is not what China desires to see, and the U.S. is responsible for all this,” the Foreign Ministry said Friday.

“We once again urge the US to immediately retract its wrong decision and create necessary conditions for bringing the bilateral relationship back on track.”

In 2012, then-Chongqing police chief Wang Lijun sought refuge in the Chengdu consulate with evidence linking the family of his then boss, former Chongqing party secretary Bo Xilai, to the death of a British businessman. The episode exposed a scandal that would see Bo ousted and his wife convicted of murder, launched a nationwide corruption campaign.
#Donald Trump  #Coronavirus
Add Comment