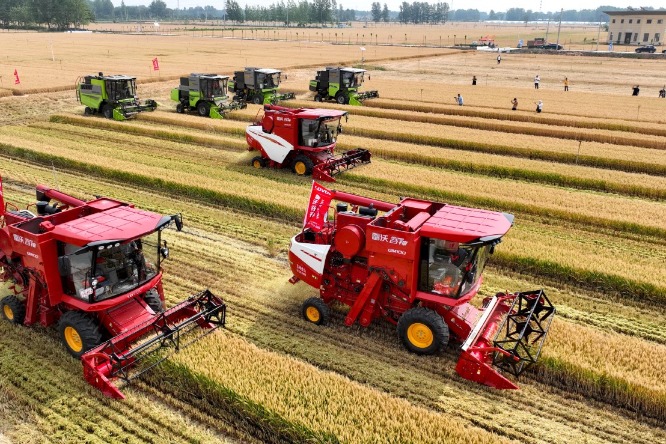 Some in the United States are accusing China of stockpiling fertilizers and grains at a time when millions in East Africa are staring at starvation. And this comes at a time when China is providing aid to Sri Lanka.
Concocting lies such as "China is hoarding grain", "China's self-sufficiency in agriculture threatening the security of the US" and "a large amount of methane gas discharged by China's rice planting causing global warming", to blame China for the rise in global food prices, the global food crisis and global climate warming is not right.

Food prices are determined by the relationship between supply and demand, but as grains are endowed with financial and energy attributes, they are becoming a symbol of pan-monetization and a substitute for energy, and the adjustment of monetary and energy policies in developed countries is having an impact on global food prices. As the US is a major producer and exporter of wheat, corn, soybeans and other agricultural products, the Chicago Board of Trade has become a pricing center for global bulk food trade, allowing it to manipulate global food prices.

Because of extreme weather conditions, the Russia-Ukraine conflict and other issues, international financial capital has been driving up global food prices. Also, when many countries are facing a food shortage, some developed countries have not taken measures to reduce the conversion of food into energy, sabotaging the volatile balance of global food supply and demand.

China has not adopted a strong stimulus financial policy, and strictly controls the processing of fuel ethanol using corn as the raw material. Compared with the drastic volatility of international grain prices, China's grain market runs smoothly and the fluctuation in grain prices is much lower than in the international market. China's summer grain output this year will increase by over 1 percent year-on-year, ensuring that the "rice bowl of China" is firmly in the hands of the Chinese people, laying a solid foundation for keeping its grain prices stable.

China's imports of grain are mainly to make up for the shortfall in domestic demand and not to hoard it. Actually, China's grain imports in the first half of this year decreased by 5.4 percent year-on-year. China has also exported food and provided food aid to other food-deficit countries, contributing to global food security.
Add Comment