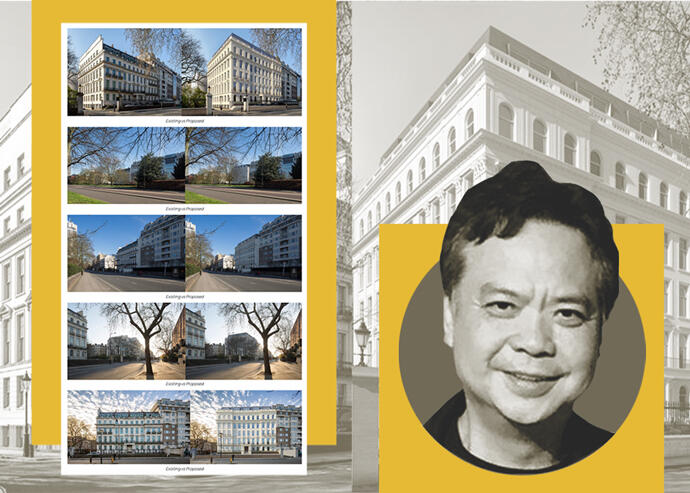 Cheung Chung-kiu plans to spend as much as $277 million to renovate 2-8A Rutland Gate in London, which he bought for $276 million last year.

Now, the Hong Kong-based businessman plans to spend up to $277 million to overhaul the property at 2-8A Rutland Gate, doubling his investment in the property to upwards of half a billion dollars, according to Business Insider.

Cheung submitted plans for the renovation to local authorities in February. A website for the property calls it “heavily dilapidated,” and notes that Cheung wants to use the property as a family home.

The 62,000-square-foot home was built in the 1980s and has been vacant for an undisclosed period. Photos of the interior show gutted and neglected rooms.

Chueng’s proposal includes reconfiguring some of the interior spaces, changes to the façade, and a more extensive rebuilding of the fourth and fifth floors. The changes to the top floors include adding about 11 feet to the building and redesigning the mansard roof.

The cost of those renovations may be inconceivable to most, but even with the renovations, 2-8A Rutland Gate wouldn’t be Cheung’s biggest residential investment. Back in 2015, Cheung set a price record in Hong Kong when he spent $656 million on a residential property in the territory’s Peak neighborhood.

He’s also no stranger to London. His company CC Land Holdings Ltd. has spent around $2.6 billion buying commercial properties in the United Kingdom’s capital, including 122 Leadenhall Street, also known as the “Cheesegrater.”