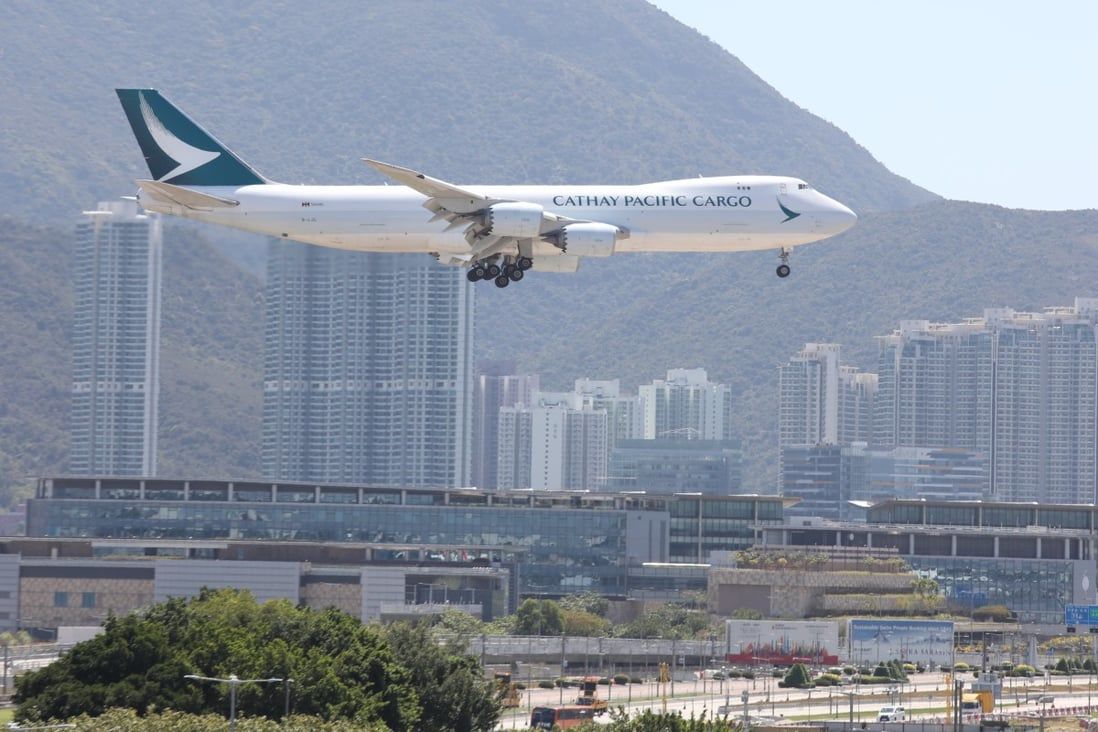 Cathay Pacific looks to recruit almost 2,500 cabin crew and cadet pilots as it prepares for return to normal service.

Cathay Pacific has launched its first large-scale recruitment exercise in Hong Kong nearly three years after the Covid-19 epidemic hit, looking for 2,000 flight attendants to help achieve its target of running at a third of its pre-coronavirus passenger capacity by the end of the year.

The city’s flag carrier also revealed on Friday that “hundreds” of cabin crew and pilots, who departed amid tough Covid-19 travel curbs, had recently returned to their jobs, but that it was a race against time to hire more to cope with the expected increase of flights when restrictions are further eased.

“Our focus right now is to add as many as we can this year and in the year 2023 and 2024,” Cathay general manager of corporate affairs Andy Wong said at the recruitment event. “By the end of this year, we will be flying at around a third of our passenger capacity and two-thirds of cargo capacity from pre-pandemic days.”

The airline’s passenger lift in August was only 16 per cent of the same month in 2019, before the pandemic struck. The latest cargo capacity was 59 per cent pre-coronavirus levels.

Unlike recruitment exercises in pre-pandemic years when more than 1,000 applicants formed long queues at the venue, the event had a calmer atmosphere with only about 50 candidates waiting at the Mong Kok Cordis Hotel for an interview.

The 50 were among those shortlisted from the more than 1,000 applications the airline has received since last month. More 200 interviews are set to be held during the two-day hiring process.

A two-hour walk-in session was arranged for Saturday for those who did not apply earlier.

The applicants said they hoped to get hired as part of the 2,000 cabin crew the airline planned to recruit in the next 18 to 24 months. Another 400 cadet pilots will also be hired.

Cathay Pacific aims to hire 4,000 front-line employees to meet its operational needs, adding to the 6,000 already on its books.

The airline pledged to add more than 400 flights to destinations with higher market demands, such as Japan, the United Kingdom and Australia, after the city ended its mandatory hotel quarantine for inbound travellers.

“We are going back to normal service. A lot of reduced and simplified service will go back, and we are also looking at even improving the service. Because many passengers haven’t flown for many years, we really want to bring their memories back,” she said.

Cathay Pacific requires the newly recruited flight attendants to be permanent Hong Kong residents aged at least 18 and proficient in English and Asian languages such as Cantonese and Mandarin.

Successful cabin crew applicants can expect to earn a basic salary of HK$9,100 a month.

The monthly pay for new flight attendants could reach HK$17,000 if flying hours return to pre-Covid levels and staff also qualify for subsidies such as layover allowances and productivity pay.

“After passing seven weeks of induction training, which includes safety, emergency, technical and service skills courses, and examination, they will officially be part of our cabin crew,” Mao said. 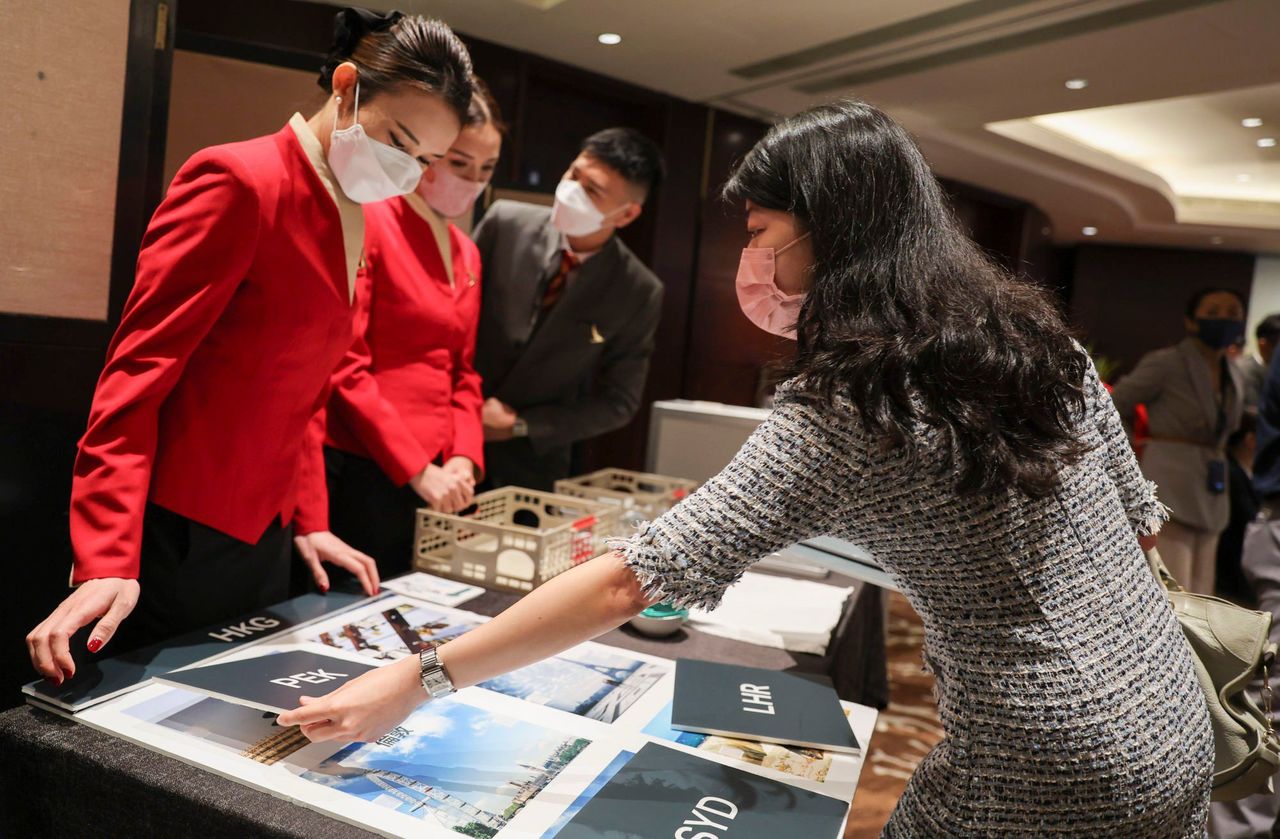 A job seeker speaks to Cathay Pacific flight attendants at a special recruitment day on Friday.

Nicole Chan Wing-lam, 23, said she had flown from Vancouver, Canada, for an interview.

“I didn’t apply for any other airlines. I always travel with Cathay Pacific and it’s very meaningful to me as I travelled a lot since when I was young,” she said.

Chan said she was positive that the aviation industry’s situation would improve as the city returned to normal.

Nicky Cheung, 25, who works in the luxury retail sector, said that despite having no experience in the aviation industry, he had applied for a job as cabin crew because of the airline’s role as the flagship carrier.

“It is like a symbol to me as I grew up in Hong Kong and travelled with Cathay and it was always my first choice,” he said.

Serene Chan, 22, who worked in the hotel industry before she applied for her “dream job” as a flight attendant, said she was confident the industry would bounce back.

“I think it’s a real challenge for the airline industry but it will get well soon,” she said. “More and more people will travel to Hong Kong as well as Hong Kong residents travelling more often so the demand for flight attendants will increase.”

The company shed a record 5,900 jobs in October 2020 when it closed its regional carrier Cathay Dragon and imposed a range of permanent and temporary staff cuts in the first half of 2021, further reducing the workforce by 2,500.

From earlier this week, aircrew based in Hong Kong no longer have to isolate in hotels while overseas after months of “closed-loop arrangements”.

They are also no longer banned from entering premises such as restaurants and pubs in the three days after their return to the city.

Law Cheung-kwok, a senior adviser in the aviation policy and research centre at Chinese University, said despite the recruitment drive, the city’s airline industry still faced an uncertain future.

“We don’t know when the mainland market will comprehensively open up for Hong Kong and the world. Secondly, we don’t know how bad the recession will be in the Western countries,” he said.

He added he also expected a slow increase in the number of international travellers as long as medical surveillance was still required for visitors under the “0+3” plan.