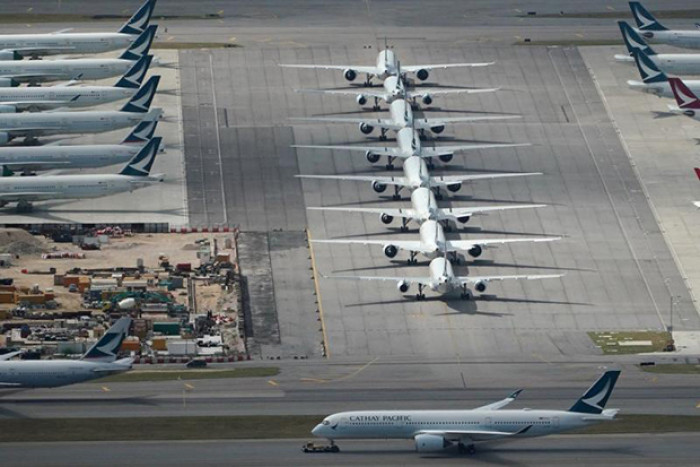 Cathay Pacific Airways has said it expects to make a loss of HK$9.9 billion (40.5 billion baht) in the first six months of 2020, the largest in its history. Airline calls third wave ‘cause for concern’.
Augustus Tang Kin-wing, the airline’s CEO, blamed the profit warning on the coronavirus pandemic, and staff were told in a memo that its restructuring review, which could impact jobs, would “balance stakeholder interests”, giving an extra clue to the factors likely to determine the company’s future size and shape.

The Hong Kong government appointed two observers to the Cathay Pacific board this week to oversee its HK$27.3 billion rescue package of the city’s flag carrier, which won shareholder approval on Monday.

“The result underlines the extent of the damage being inflicted on our operations since Covid-19 started spreading across our markets, decimating the demand for air travel as customers were unable or unwilling to fly,” Tang said, adding the third wave of cases in the city was a “cause for concern”.

Cathay swung to the biggest loss in the company’s reporting of a six-month or full-year period from a HK$1.3 billion net profit in the same time last year. Its previous biggest loss was in 2008 at the height of the global financial crisis, when it lost HK$8.6 billion.

It is the first time the airline has given an estimate of how many fewer aircraft it would require to operate its optimal post-pandemic schedule, giving a better indication of company size and how many staff it would ultimately need.

Ronald Lam Siu-por, the airline’s chief customer and commercial officer, said: “The one certainty facing the global aviation industry is that the landscape will be significantly changed when international air travel recovers.”

The government led the HK$39 billion rescue of Cathay, citing risks to the wider economy, as the airline warned it was close to collapse without financial help.

Carlson Tong Ka-shing, the former securities watchdog chairman, and Rimsky Yuen Kwok-keung, the ex-justice minister, have been named to oversee the investment.

The airline has been losing up to HK$3 billion a month since February. Tang said Cathay would build financial forecasts and judge market trends on top of factoring stakeholder interests when it presented its restructuring proposals to the board later this year.

But it is on course to operate double-digit capacity, or 10% in August, the first time in five months. In April and May the carrier operated 3% of its normal schedule.

However, for the second month in a row, the airline scaled back its planned capacity and in July it has offered 7% of a normal schedule, against 9.4 % originally, highlighting the reality of decreased demand.

After a ban on passengers transiting through Hong Kong International Airport was eased partially, the airline said it saw a “gradual pickup” but connecting passengers pay less than travellers starting or ending journeys in Hong Kong.

The airline is expected to unveil its half-year 2020 results on Aug 12.
#COVID-19  #Covid  #Coronavirus
Add Comment