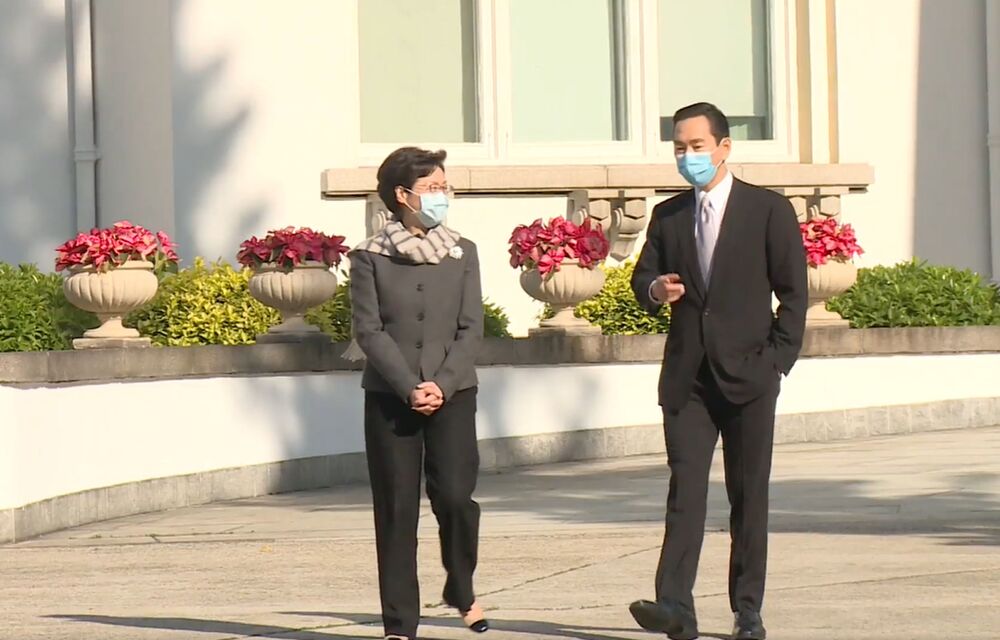 Carrie Lam has no time to think about re-election yet

Chief Executive Carrie Lam Cheng Yuet-ngor does not have the time to consider whether to stand for re-election yet, Executive Council convener Bernard Chan said.
Asked about former CE Leung Chun-ying, Chan said he is “definitely qualified” as a candidate and it is his personal choice whether he would return from national-level work to working as the city's chief.

The political gossip mill is heating up ahead of the CE election next March, with Leung, now vice-chairman of the National Committee of the Chinese People’s Political Consultative Conference, saying he would not rule out the possibility of returning as CE.

Speaking on the sidelines of National People's Congress meeting, Chan, who was dubbed a “black horse” potential candidate in previous CE elections, said he has no interest in standing in the next election. The NPC deputy explained it is impossible for him to give up his career to fully engage in the government’s works.

Chan said from his understanding, Lam wanted to focus on ongoing issues before her term ends, including tackling social issues and the Covid-19 pandemic.

“She wishes to complete the promises she had made when running for election 4 years ago,” Chan said.

As for Leung, Chan said he is fully qualified for the CE position: “He is our former CE, and he has been in the political system for a very long time.”

“It is up to Leung to decide whether to run for the next election,” he said.

Chan said he was told that the SAR government wants to complete the elections for Legislative Council and Election Committee within this year. Whether the LegCo election should swap with Election Committee election, with the former taking place in September and the other to follow in December will depend on the circumstances.

Chan said government officials are on a tight schedule to improve the election system: “The government doesn’t want to postpone the election to next year again, given that the LegCo election is already a year late.”

Chan said the electoral changes will push the city’s democracy’s progress backwards to when Hong Kong returned to China in 1997, but only because previous changes failed to meet expectations when there was filibustering and advocacy of separatism.

These events came to Beijing’s attention. They are worried that whether Hong Kong’s path to democracy is on the right track and “one country, two system” can still work, Chan added.

Chan understood that some Hong Kong citizens are disappointed in the election system in the short term and won’t be engaging much in politics. He hoped they would understand and believed it takes time to rebuild trust between Hongkongers and China.

Chan said the national security law and electoral changes posed by China aim to preserve the “one country, two system” principle, on the premise that Hong Kong won’t be the headquarter for subverting the state.