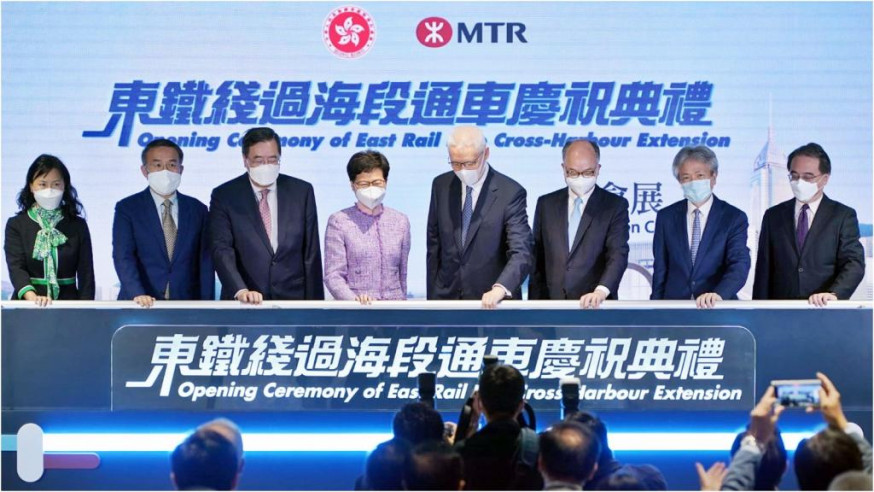 Chief Executive Carrie Lam Cheng Yuet-ngor experienced MTR’s East Rail cross-harbor extension on Saturday before it opens to the public on Sunday and hosted the opening ceremony at the new Exhibition Centre station.
With the cross-harbor extension, passengers in Hung Hom can travel to the new Exhibition Centre station in five minutes and to Admiralty station in seven minutes.

They arrived at Hung Hom station in the morning and headed to the Exhibition Centre, taking the latest cross-harbor extension. Later they would also take the train to Admiralty station, which was dubbed by MTR as the “super-interchange,” connecting four lines -- East Rail Line, Tsuen Wan Line, Island Line, and South Island Line.

Speaking at the ceremony, Lam praised the strategic development of the extension and said it pulled the city closer together and shortened the distance between North East New Territories and Wan Chai district.

According to the city’s leader, the East Rail Line -- Hong Kong’s most historical railway -- also witnessed the evolution of a new century.

Meanwhile, Auyeung also said the extension started a new chapter in Hong Kong’s railway history, and the public will learn how they will benefit from the extension after tomorrow’s opening.

He expected the extension to boost the Wan Chai district’s economy and the city’s overall economy.

Ahead of tomorrow’s opening, the A3 Exit of the Exhibition Centre will open to the public around 4.45am on Sunday, and the first train is set to depart at 5.25am.
Add Comment