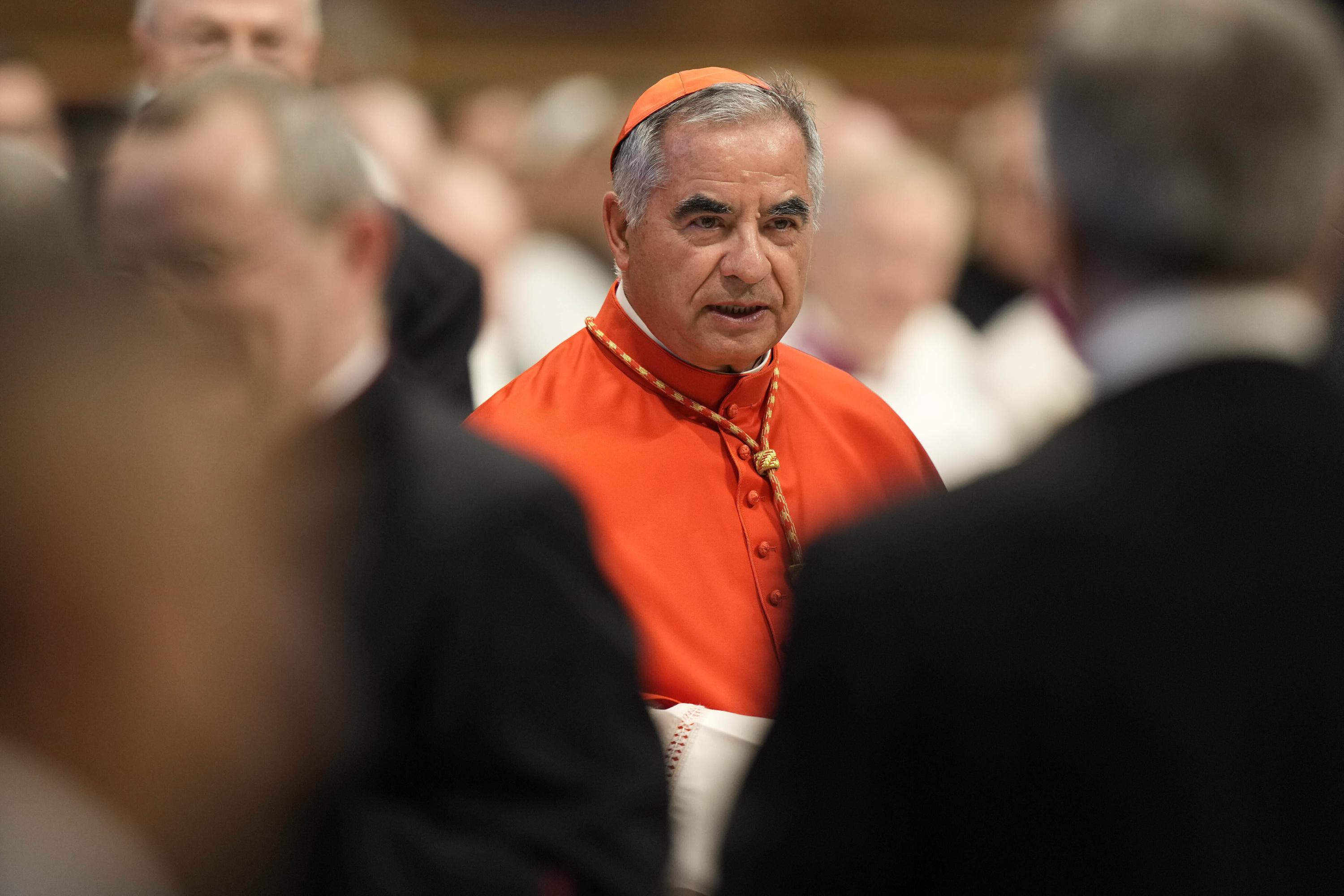 The Vatican’s fraud and corruption trial took a dramatic twist Wednesday when a once-powerful cardinal challenged the Vatican’s police commissioner on the stand about one of the more peculiar tangents of the case: the Vatican’s half-million euro payments to a self-styled security analyst who, with Pope Francis’ blessing, helped arrange negotiations for the release of a nun held hostage by Islamic militants.
Cardinal Angelo Becciu made a spontaneous declaration to the Vatican tribunal during the interrogation of Commissioner Stefano De Santis, a top officer in the Vatican gendarmes police force and a key prosecution witness. De Santis was one of the primary investigators in the probe that led to the trial over the Holy See’s 350 million euro investment in a London property venture and related cases.

Vatican prosecutors have accused 10 people, including Becciu, of a host of alleged financial crimes and of fleecing the Holy See of tens of millions of euros in fees, commission and other losses.

De Santis was being questioned about one of the tangents of the London property deal, concerning Becciu’s relations with the security analyst, Cecilia Marogna.

Becciu, who was the No. 3 in the Vatican secretariat of state at the time, has previously told the court that he hired Marogna in 2015 as an external security consultant and subsequently involved her in negotiations to hire a British security firm to negotiate the release of a Colombian nun being held hostage in Mali by al-Qaida-linked militants.

Becciu told the court in May that Francis had authorized spending up to 1 million euros to free the nun, who was eventually let go last year, though he stressed it wasn’t ransom.

De Santis told the court that the Vatican gendarmes learned via Interpol in 2020 that Marogna’s Slovenia-based company had received 575,000 euros in nine separate wire transfers from the secretariat of state for purportedly “humanitarian” endeavors, but that the money was being used to pay for cosmetics and other high-end luxury goods.

He said he and the Vatican’s police chief went to Becciu’s apartment on Oct. 3, 2020 at the cardinal’s request and informed him what they had discovered.

De Santis told the court that Becciu begged them to not let word of the Marogna payments get out, saying it would harm him and his family, and offered to refund the money from his account at the Vatican bank.

Becciu took issue with De Santis’ version of events in his spontaneous address to the court, and reminded the three-judge panel of his previous testimony: that the payments for the hostage negotiation had been agreed upon with Francis and that only he and the pope knew about them, w ith the Vatican gendarmes intentionally kept in the dark.

Becciu told the court that he didn’t request the meeting and found it odd that De Santis would reveal its contents since the police officers had told him at the time that it had to remain secret since there were professional implications about revealing the contents of an ongoing investigation.

Becciu said he was indeed anguished to learn that Vatican police were investigating Marogna, but said his anguish had nothing to do with his family but rather the fact that Francis and he had hoped to keep the hostage negotiations secret.

The trial, which resumed late last month after a summertime pause, has picked up pace and has nearly 20 hearings scheduled before the end of the year. Prosecutors have nearly 30 witnesses and lawyers for the 10 defendants have dozens more, including the current Vatican No. 2 and 3.
#Pope Francis
Add Comment