A Hong Kong court ruling has strengthened calls to establish an independent mechanism for complaints against the police amid intense outcry at home and abroad over alleged arbitrary arrests and excessive police use of force.

On Nov. 29, the Court of First Instance ruled in favor of the Hong Kong Journalists Association, saying the existing system is inadequate for investigating complaints against the police violations of the city’s Bill of Rights on torture and cruel treatment. Also, the failure by the police to require anti-riot officers to display their numbered badges in the protests violated the Bill of Rights, the court said.

“If the government still respects the court, it should take the responsibility to rectify the problems,” Eric Cheung Tat-ming, principal lecturer and director of clinical legal education at the University of Hong Kong said.

“If the government loses its appeal case [in the Court of Appeal], it will have to take some time to come up with a new mechanism. If the officials ignore the judge's suggestions, it will be considered overturning the ruling,” he said.

Cheung reiterated calls for an independent body to process complaints and redress misconduct as well as any false accusations against police officers. Backers of the calls include pro-government legislators.

“By doing so, the government can restore public confidence in the police,” Cheung said. “By the same token, if the complaints against the police are invalid, it won’t be fair to them that the system is inadequate.”

He added that the government will have to come up with ways to address the two main issues the judge has raised in the verdict -- the absence of independent oversight in the existing police complaint mechanism and police officers’ failure to display their badges. 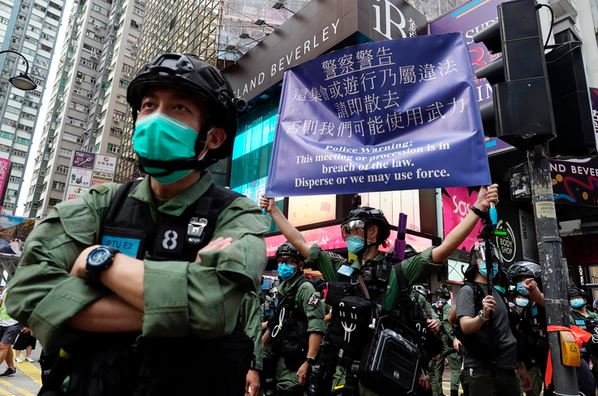 C.M. Chan, a lawyer and head of Centre for the Rule of Law of Hong Kong Policy Research Institute, an independent think tank, suggested that the Hong Kong government set up something similar to the Independent Police Complaints Commission in Britain, which he describes as a “tiger with teeth” as it has the authority to initiate investigations.

“From a good governance point of view, the government should listen to the court’s recommendations,” he said, adding that, "At present, you make a complaint against the police and the complaint goes to the police and the IPCC only monitors their investigations," he said, referring to Hong Kong’s Independent Police Complaints Council.

Veteran Hong Kong-based China-watcher Johnny Lau Yui-siu has painted a less optimistic picture. He said, “The government may just indicate they respect the court’s ruling but brush aside any need to introduce reforms to the existing police complaint system.”

Nevertheless, he sees the court judgement as a step toward a long process in cracking the Chinese Communist Party’s grip on Hong Kong. “It will have a snowballing effect in pushing for changes,” he said, adding that Chinese President Xi Jinping’s purported “law-based governance” is a sign that Beijing cannot ignore the fact that authorities must act according to the law, even though they try to sugarcoat arbitrary policies.

Chan also said he has reservations about how willing Hong Kong authorities are to heed the court’s recommendations.

“We have to accept that the Hong Kong government operates within the parameters of the one-country-two-systems, we can’t draw complete parallels with most Western societies,” he said, referring to the arrangement under which Hong Kong retains its legal system and wider civil liberties than those in mainland China. 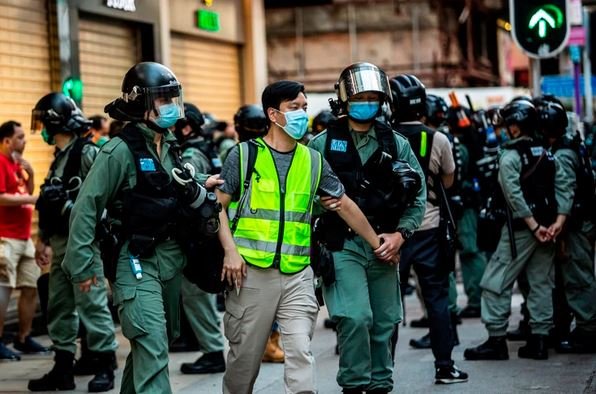 Police arrest a man and lead him to a nearby bus during a protest against China's planned national security law in Hong Kong on June 28, 2020.

As of August, the police complaints office had received 1,895 complaints, including 199 from the media that have been referred to the IPCC.

Last year, a panel of international experts appointed by the IPCC to probe allegations of excessive police force during the protests resigned collectively. The panel said in a statement that the IPCC lacked the powers necessary “to meet the standards citizens of Hong Kong would likely require” in a society that “values freedom and rights.”

In a report, Policing: A Journal of Policy and Practice, published last month, Clifford Stott, a British panel member who stepped down, said, “Hong Kong police played a pivotal role in radicalizing protests.”

Police Commissioner Chris Tang said the force will appeal the High Court's decision that officers' failure to show their identification numbers constituted a breach of the Bill of Rights.

Hong Kong’s Beijing-backed Chief Executive Carrie Lam has repeatedly said that the existing mechanism is sufficient to deal with complaints and there is no need to set up an independent system.