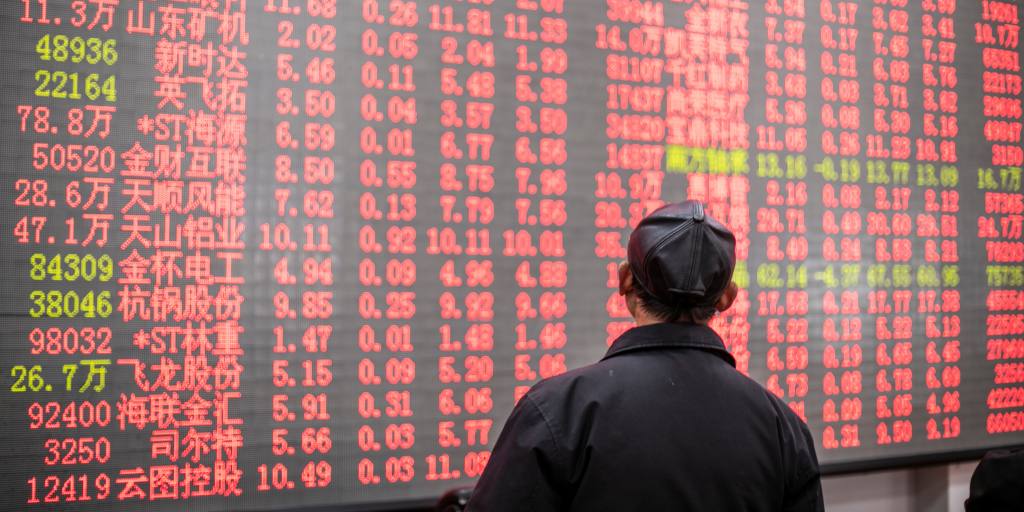 Chinese stocks are displaying a contradiction. How is it that a market on which so many fund managers are so persistently bullish has plunged toward correction territory?

The CSI 300 index, which tracks the biggest shares traded in Shanghai and Shenzhen, climbed 27% in 2020 -- showing the impetus expected from the world's only big economy to grow during a pandemic-hit year.

Since the index raced to an intraday record on Feb. 18, however, it has lost 15% of its value -- even though China's economy continues to rebound, as evidenced by the 18.3% year-on-year growth in first-quarter gross domestic product that Beijing reported on Friday.

The decline is the sharpest for the CSI 300 since the COVID-induced global fall last March. The lack of support from both local and global investors is fanning memories of the crash six years ago that erased half the value of the index.

Analysts of the apparent disconnect say that the "big picture" for Chinese stocks -- strong growth, more economic reform, a buoyant consumer-led economy, and demand spurred by greater inclusion in global indexes -- remains unchanged. But investments at the moment face short-term challenges that outweigh the long-term opportunity. 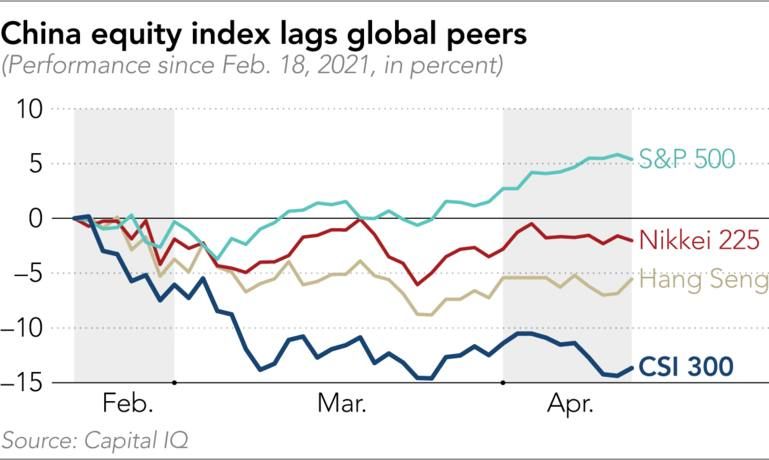 Headwinds are seen from "marginally weakened earnings recovery momentum, the phasing out of stimulus and a potential re-escalation of geopolitical risk," said Bruce Pang, head of macro and strategy research at China Renaissance Securities.

Beijing is withdrawing some of the liquidity that had been injected into the financial system at the height of the pandemic, wanting now to curb speculation and avoid the formation of bubbles. The People's Bank of China withdrew a net 40.5 billion yuan ($6.2 billion) of one-year money in the first quarter of the year, and last week (April 15) only injected enough cash to match maturing loans.

"Chinese stocks like their global peers in the past year have been powered by liquidity," said Tian Hanqing, chief investment officer for quantitative investment at Huatai-PineBridge, which manages $21 billion. "With the Chinese central bank taking away some liquidity, investors have reassessed the valuations."

Growth in outstanding total social financing, a broad measure of credit and liquidity, has begun to ease, while the central bank last month instructed banks to curtail loan growth.

Chinese stocks all the way back to 2000 have moved in line with credit growth, except for the boom and bust of 2015, data shows.

Some investors are braced for more action to restrict credit. Lombard Odier Darier Hentsch, the Swiss private bank, "took profits" on mainland shares in February given the rising chance of monetary tightening, according to an investor note late last month.

The tightening is also leading to waning expectations for corporate profit growth. In particular, investors have cut their outlook on some sectors that are particularly reliant on credit. Technology, retail, autos and real estate have had the biggest downward revisions to 2021 earnings forecast since the end of February, according to a study by UBS. 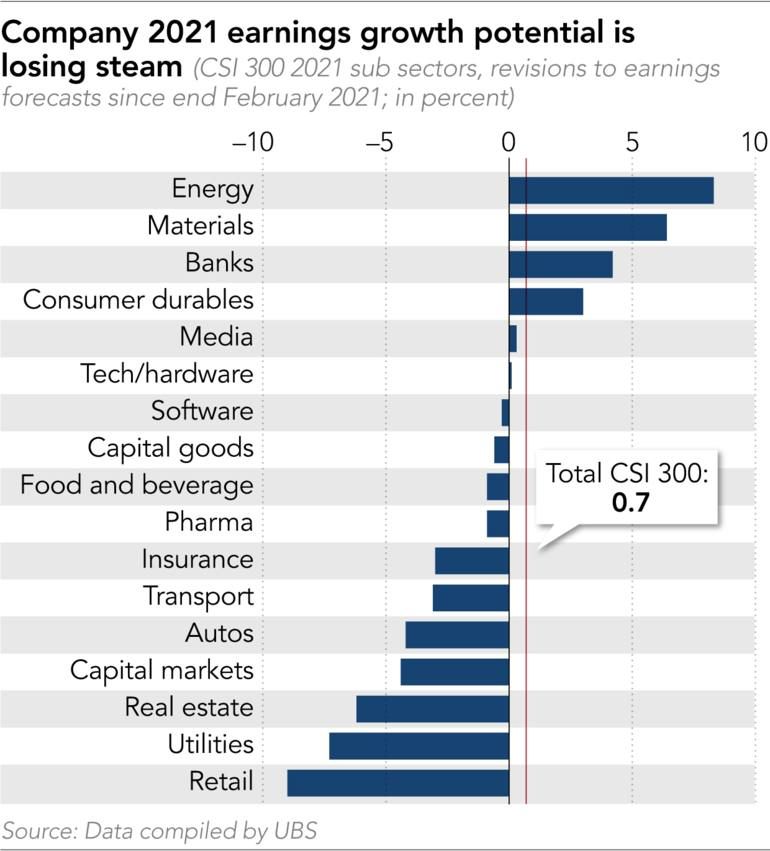 Technology stocks including Alibaba Group Holding and Tencent Holdings were also affected by rising U.S. Treasury yields and a regulatory crackdown in mainland China. Tech stocks are sensitive to rising yields because their valuation is backed by the outlook for future earnings, which are discounted more deeply when bond returns go up.

Beijing is reining in the country's leading online platforms to curtail risk. This month Alibaba was fined 18.2 billion yuan for abuse of its dominant position in online retail. Tencent and 33 other companies were also told last week to rectify their behavior.

All this has hit valuations for these growth stocks and prompted a shift toward value stocks. For example, beaten-down shares in the four largest banks -- Industrial and Commercial Bank of China, China Construction Bank, Bank of China, and Agricultural Bank of China -- have all climbed between 8% and 16% since mid-February.

Tensions between Washington and Beijing also overshadow the market. The U.S. has stepped up action against Chinese companies: Under a law passed last year, Chinese companies risk expulsion from American exchanges within three years if U.S. regulators are not permitted to review their audit records.

Still, the correction is seen as unlikely to extend to the levels of 2015. First, stock market leverage -- the use of margin financing to buy stocks -- stands at around 5%, half the level six years ago. This suggests investors are being more prudent and means a sharp fall in the market will not trigger margin calls on the scale of 2015, limiting the chances of a vicious circle of falling prices.

Next, the market is owned primarily by long-term institutional investors, which hold 75% of the market by capitalization now, compared with 35% in 2010, according to China Renaissance Securities. These sellers are more likely to hold firm through any dips.

Analysts also note that the correction has been concentrated in the consumer staples, technology and health care sectors, which make up 43% of the CSI 300 index. Once prices for these stocks stabilize, some say, investors will be lured back by the potential for growth.

Overall, the Chinese economy is still projected to expand 8.5% this year, according to a Nikkei survey of economists. The economic resurgence is expected to drive earnings in sectors such as financials and manufacturing. And despite the waning expectations in some sectors, CSI 300 constituents on average are expected to boost earnings by a fifth in 2021, according to analyst consensus estimates.

The tug of war between the bulls and bears is paving the way for fund managers to grab a larger share of daily volumes and seize the initiative from "mom and pop" investors, who are behind more than 70% of daily buying and selling.

"Foreign and institutional participation is expected to rise over time, and this is likely to provide some counterweight to retail investor flow, which typically is driven more by sentiment," said Tai Hui, Asia chief market strategist at J.P. Morgan Asset Management in Hong Kong.

Global funds are expected to increase allocations from the current 7% as China opens up and global index providers increase their weightings. Domestic annuities funds and insurers could also deploy 1.5 trillion yuan in new funds over three years, after authorities allow them to boost equity holdings.

Four fund managers and three strategists that Nikkei spoke to expect the market to bottom out by the third quarter.

"Global money managers are structurally underweight on China, especially looking at other Asian markets such as South Korea, Taiwan and Japan, where foreign ownership exceeds 30%," said Jim McCafferty, joint head of Asia-Pacific equity research at Nomura. "If you were to take a long-term view, they would want a lot more exposure to China than they have right now."