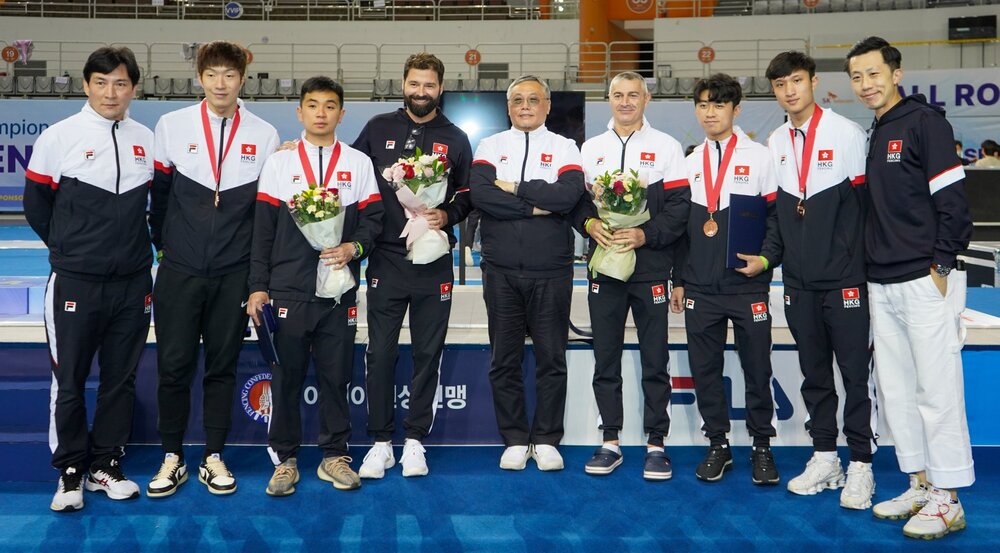 The men's foil fencing team has snatched a bronze medal to close off Hong Kong's challenge at this year's Asian Fencing Championships in Seoul on a high after the heartbreak of losing by just three points to the Korean team in the semifinals.
It is the best result for the men's foil fencing team, bagging a gold and two bronzes in individual and team bouts.

Team coach Gregory Koenig said he felt happy for the team despite his hope for the team to snatch both gold medals in the individual and team events being dashed.

"I was expecting a better performance for the team, but a medal is a medal, I am still happy for the fencers. I will be reviewing their performances as a team and keep working hard after going back to Hong Kong to make the team even stronger," Koenig said.

He is expecting at least two medals in the World Fencing Championships to start on July 15 in Cairo, Egypt, one from the individual event and one from the team event.

Koenig also said current world No 10, Ryan Choi Chun-yin, had a "hot hand" as he went on a scoring run against the Korean team in the semifinals: "But it was not enough this time," he said.

He was referring to Choi's top-notch performance during his bout against Korea, currently ranked 10th in the world, where he scored 14 points in the eighth out of nine rounds.

After eliminating Australia 45-35 in the quarterfinals, the Hong Kong team, consisting of world No 1 Edgar Cheung Ka-long, Choi, Lawrence Ng Lok-wang and Yeung Chi-ka, was trailing 24-32 in the seventh round against Korea.

Choi, who just snatched bronze in the earlier individual event, then went on a 14-8 run in the eight round to close the deficit to only two at the end of the penultimate round, with the score at 38-40.

Cheung, who was crowned champion in the individual event, succeeded in tying the game at 42-42 but was then unable to capitalize on the momentum, and lost the bout by three points 42-45.

The team then cruised past Chinese Taipei 45-30 in the rankings bout to finish in third.

As the Hong Kong delegation bagged two gold, one silver and four bronze medals in the tournament, ranking third just behind Japan and Korea in medal standings, chief coach Zheng Kangzhao said he is satisfied with Hong Kong fencers' performance, but he said there is still room for improvement.

"After half a year of training and competitions outside Hong Kong, the team will return to Hong Kong before going to training in Europe early-July and then Cairo," Zheng said.

That came as the Hong Kong football team saw nine more players and three staffers infected with Covid on their way back from India, after the team qualified for the Asian Cup finals for the first time in 54 years, and the team is currently under isolation in Thailand.

Goalkeeper Edmond Yapp Hung-fai said he was thrilled to qualify in the finals, as the team proved that it has the ability to compete within Asia.

"During the games, some players failed to acclimatize to the environment and therefore fell ill, and the anti-Covid measures in India were also not ideal, therefore many players were infected, but I do not think it will affect us too much," Yapp said.
#Covid
Add Comment