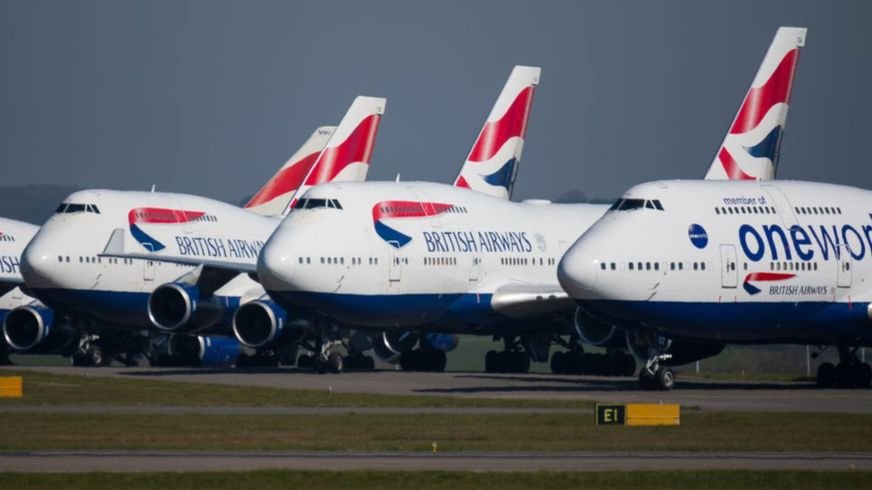 British Airways to cut up to 12,000 jobs as air travel collapses

British Airways is set to cut up to 12,000 jobs from its 42,000-strong workforce due to a collapse in business because of the coronavirus pandemic.

The airline's parent company, IAG, said it needed to impose a "restructuring and redundancy programme" until demand for air travel returns to 2019 levels.

The pilots' union Balpa said it was "devastated" at the news and vowed to fight "every single" job cut.

In a statement, IAG said: "The proposals remain subject to consultation, but it is likely that they will affect most of British Airways' employees and may result in the redundancy of up to 12,000 of them."

The company said it will take several years for air travel to return to pre-virus levels, a warning that has been echoed by airlines across the world.

Alongside IAG's statement, BA chief executive Alex Cruz wrote in a letter to staff: "In the last few weeks, the outlook for the aviation industry has worsened further and we must take action now. We are a strong, well-managed business that has faced into, and overcome, many crises in our hundred-year history.

"We must overcome this crisis ourselves, too. There is no government bailout standing by for BA and we cannot expect the taxpayer to offset salaries indefinitely... We will see some airlines go out of business."

Balpa's general secretary Brian Strutton said: "This has come as a bolt out of the blue from an airline that said it was wealthy enough to weather the Covid storm and declined any government support.

"Balpa does not accept that a case has been made for these job losses and we will be fighting to save every single one."

Also on Tuesday, IAG revealed the impact of the virus outbreak on group revenues. In the first three months of 2020 revenues fell 13% to €4.6bn (£4bn). Worse is to come warned Stephen Gunning, IAG's chief financial officer.

Airlines across the world have warned they face a fight for survival.

In the UK, EasyJet has laid off its 4,000 UK-based cabin crew for two months. And Sir Richard Branson has appealed to the government to help bail out his Virgin Atlantic airline with a loan thought to be up to £500m.

Elsewhere, Qantas has put 20,000 staff on leave, while Air Canada has done the same for about 15,200 employees. Norwegian Air has said it could run out of cash by mid-May. At American Airlines, about 4,800 pilots have agreed to take unpaid short-term leave and more than 700 are taking early retirement.

e know the aviation industry is in the throes of an unprecedented crisis. But the announcement from IAG is chilling nonetheless - and not only because of the number of jobs at stake. That's because the company is saying explicitly that it expects the recovery in the industry to be a very slow one, with passenger demand not reaching 2019 levels for "several years".

The airline can survive on its financial reserves for the moment - and take advantage of the government's job retention scheme to furlough employees for a short period. Government support of this kind is very short term. With a quick recovery it might be enough to save a large number of jobs.

Yet the prospect of that happening is deeply uncertain. It's not clear when countries will remove travel restrictions, under what conditions people will be able to fly - or even if they'll want to.

IAG has now made it clear it's expecting the industry to look very different in future to what was the norm until just a few weeks ago, and is taking action accordingly. But unions will disagree, and the company may find itself accused of over-reacting - or even of taking advantage of the crisis in order to reduce its cost base.
#Covid  #Coronavirus
Add Comment