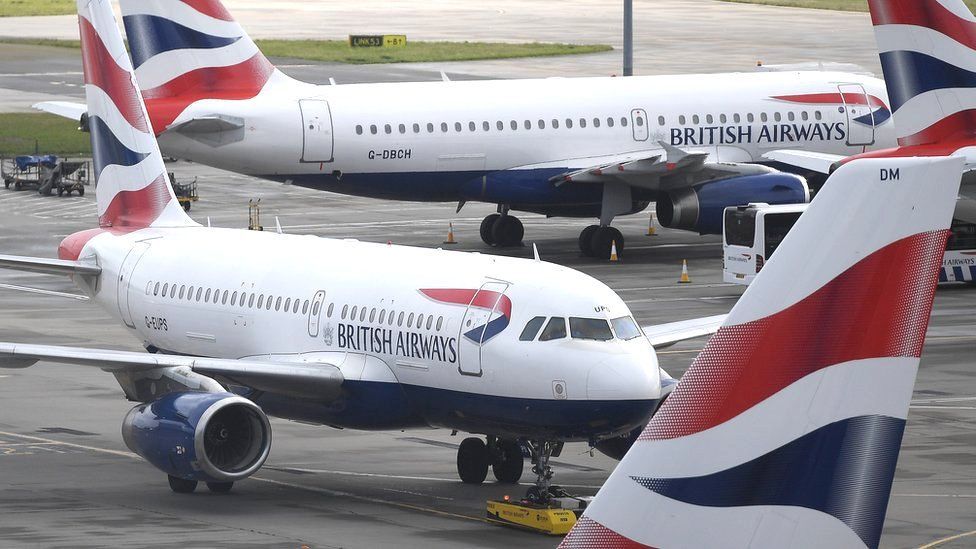 British Airways has cancelled a further 1,500 flights, mostly for July.

The wave of cancellations made over the past weeks will affect tens of thousands hoping to jet off this summer from Heathrow and Gatwick.

The industry has been struggling with staff shortages as demand for air travel rebounds.

British Airways had already removed 10% of scheduled flights between April and October, but said that "regrettably" more reductions were needed.

A spokesperson from the airline, which is the UK's largest, said: "We took pre-emptive action earlier this year to reduce our summer schedule to provide customers with as much notice as possible about any changes to their travel plans.

"As the entire aviation industry continues to face into the most challenging period in its history, regrettably it has become necessary to make some further reductions."

The carrier said it was in touch with customers to "apologise and offer to rebook them or issue a full refund".

The wave of cancellations comes ahead of Friday's deadline, announced last month by the Department for Transport (DfT), for an amnesty to give airlines a short window to hand back airport slots in the summer season they are not confident they will be able to operate.

BA is expected to announce further cancellations over the summer ahead of the deadline.

Airport slots provide airlines with the authorisation to take off or land at a specified time on a specified day. In usual circumstances, the carriers risk losing the slots - and taking a hit to their business - if they cancel flights.

On Wednesday, British Airways was also affected by a rare "schedule intervention" by Heathrow Airport.

Heathrow asked airlines to cut 30 flights from their Thursday morning schedules, as more passengers were expected than it could deal with.

It made the move to ensure the airport had enough security staff on duty for the number of passengers.

The cancellations come as hundreds of British Airways check-in staff at Heathrow are deciding on strike dates which could further affect the peak summer school holiday travel period.

Many jobs in the aviation industry were lost during the course of the Covid pandemic and recruiting enough staff in time to deal with the surge in demand for travel has proven difficult for airlines and airports.

Gatwick has already said it would be reducing the number of flights during summer because of staff shortages before the airport slots amnesty was announced.

And Manchester Airport has warned it will not be able to return to its pre-pandemic standards until the autumn.

Thousands of passengers were affected by last-minute flight cancellations over the Easter and half-term holidays.

That earlier disruption prompted the government and the aviation regulator, the Civil Aviation Authority, to write to airlines telling them to ensure their summer timetables were "deliverable... based on the resources you and your contractors expect to have available".

Anna 209 days ago
Pilots are dying in record numbers from being forced to take the clot shot and those that refused were fired or they quit. Get use to it and hope you are not in the plane when the flight crew times out
View all comments (1)Add comment