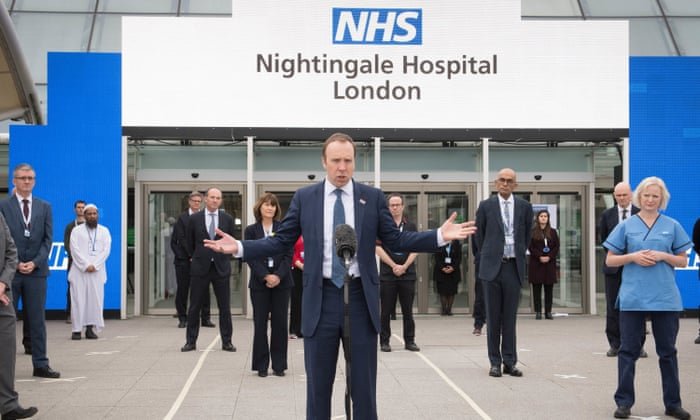 Three weeks ago, the World Health Organization told countries battling Covid-19 to “test, test, test” for the virus. Since then, the UK government has been accused of issuing mixed messages, of over-promising and under-delivering – the UK’s daily testing rate has only just passed 10,000.

11 March: Tests to be expanded

The health secretary, Matt Hancock, insists the government is “rolling out a big expansion of testing” but declines to give a specific timetable. NHS England says there are plans to increase coronavirus testing to 10,000. The UK-wide death toll stands at eight – 1,215 people have been tested for coronavirus in the UK.

12 March: Tests to be restricted

The UK moves from the “contain” to the “delay” phase of its plan to tackle coronavirus. Boris Johnson announces that health workers will no longer test people for the virus in their homes, but will continue to test people already in hospitals.

The WHO urges countries to “test, test, test”. 3,826 people have been tested for coronavirus in the UK.

Boris Johnson announces the ambition of carrying out 25,000 tests a day, but provides no detail. 5,779 tests are carried out that day.

The prime minister says mass testing to see if people have already contracted the virus, and are probably therefore immune, will take place relatively soon, which he says would be a game-changer. The UK death toll from coronavirus stands at 144.

Matt Hancock announces the government has bought 3.5m antibody tests, which can determine if someone has had coronavirus. He repeats that general testing will be ramped up, but with no timeframe for deployment. 6,491 tests are performed.

Earlier that day, Prof Sharon Peacock, the director of the national infection service at PHE, says mass antibody testing in the UK will be possible within days. The government later takes a more cautious line, saying the tests will not be available so quickly.

Michael Gove announces that a “new alliance” of businesses, research institutes and universities will boost antigen testing capacity (which checks if someone has the virus) for frontline workers. He says hundreds of people will receive the tests over the weekend and that there will be a “dramatic” increase in testing the following week.

Only 8,240 people are tested on this day. Gove says the availability of certain chemicals is limiting the ability to rapidly increase testing capacity.

1 April – Ministers admit only 0.4% of NHS staff have been tested

Despite its 27 March announcement, Downing Street confirms that only 2,000 people out of 500,000 frontline NHS England workers had been tested for coronavirus so far. Public Health England’s Prof Yvonne Doyle appears to confirm that the UK’s strategy is now to increase testing for the virus in the general population. A total of 9,793 tests are carried out.

Testing passes 10,000 a day for the first time since the start of the crisis, with 10,215 carried out. Hancock sets a new government target of 100,000 tests a day by the end of April – including both antibody and antigen tests. He says the UK wants to buy 17.5m antibody tests, “subject to them working”, and that early tests had been “poor”. None of the 3.5m tests bought by the government – and announced on 24 March – have been found to work so far.

Hancock tells broadcasters that the prime minister’s 25 March commitment to get to 250,000 tests a day “still stands”, but that he wanted to “put a very clear timeline” on the goal to get to 100,000 by the end of the month. He says it is “frustrating” that the first antibody tests have not worked. The prime minister’s spokesman is forced to clarify that the 100,000 target is for England only.
#COVID-19  #Covid  #Coronavirus  #Boris Johnson
Add Comment