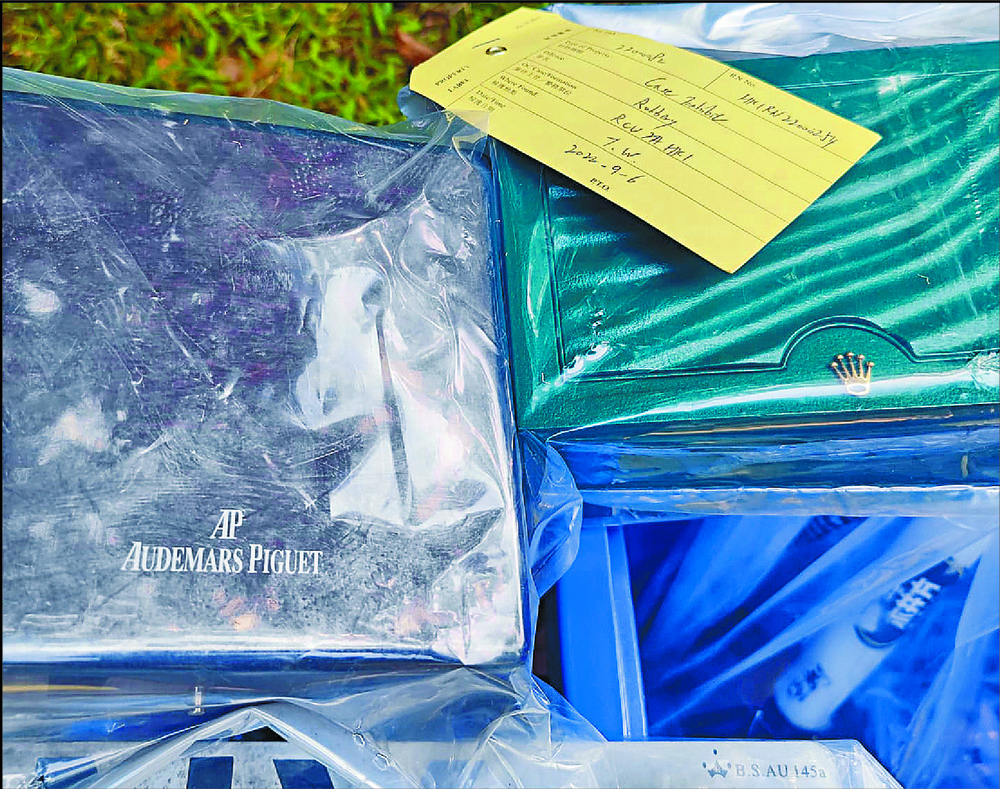 Police have found a getaway car and an air gun loaded with steel beads in connection with the HK$13 million robbery of a watch shop in Causeway Bay on Wednesday.
Chief inspector Cheung Ka-wing of the island's regional crime unit said yesterday there was "breakthrough development" in the case following a report to the police at about 5am that the getaway car was parked on a mountain road near Shing Mun Reservoir in Tsuen Wan.

"The car key was still inserted in the ignition lock cylinder," he said.

"We have also found a silver air gun which is believed to be related to the case, and it has steel beads in its magazine," he said.

Cheung said officers have to wait for further examination by the forensic firearms examination division to confirm its power and whether it can hurt people.

Police also seized a number of fake license plates, clothes, gloves and shoes that the robbers wore during the hold-up, as well as a hammer, a dozen watch holders and two watch boxes.

Cheung said they will continue to look for the rest of the watches, and further arrests could be made.

He also called on people with information on the robbery and people who could be in touch with the stolen goods to contact police on 2860-7843 or 9886-0043.

Police on Monday arrested two local men aged 32 and 43 in Happy Valley and Yuen Long, who are the car owners and were suspected of providing the getaway car. They were still being detained last night to assist police with the investigation.

Four men, aged 20 to 35, were charged with one count of robbery each in an Eastern magistrates' court yesterday.

All unemployed, Yeung Kwok-git, 25, Luk Yin-shing, 26, Zhou Enyan, 35, and Cheng Ying-kit, 20, are charged with robbing Tse's Collection at shop A1 on the ground floor of tower A of Lockhart House on Lockhart Road of 60 Rolex and 10 Audemars Piguet watches on August 31.

No plea was taken and they were remanded in custody until November 29 pending further investigation including examination of surveillance camera footages and fingerprint and DNA identification.

Yeung and Zhou applied for bail but their requests were rejected by principal magistrate Ada Yim Shun-yee.

Zhou's arm was wrapped in a sling in court.
Add Comment