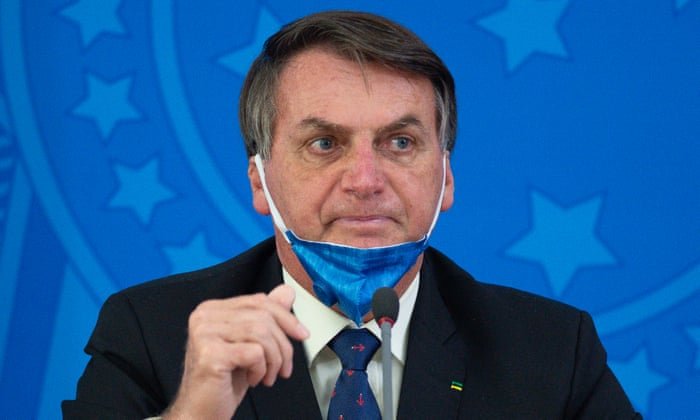 Brazil’s far-right president, Jair Bolsonaro, has accused his political foes and the press of purposefully “tricking” citizens about the dangers of coronavirus, as Latin America braced for a spike in the number of deaths.

The pandemic has claimed nearly 15,000 lives across the globe and looks set to exact a deadly toll on Latin America in the coming weeks, with many regional governments closing borders and shutting down major cities in a desperate bid to limit the damage.

But Bolsonaro has resisted such drastic measures, dismissing media “hysteria” over coronavirus and calling the illness “a little flu”.

In a tetchy television interview on Sunday night Bolsonaro again downplayed the pandemic and attacked the governors of key states including Rio de Janeiro and São Paulo who have ordered residents to stay at home and are imposing quarantines.

“The people will soon see that they were tricked by these governors and by the large part of the media when it comes to coronavirus,” Bolsonaro said, as his own health officials announced 25 deaths and 1,546 cases of coronavirus in Brazil.

Bolsonaro claimed a wave of pot-banging protests, which entered their sixth night on Sunday, were a part of a media-backed plot to topple him.

“It is a shameless campaign, a colossal and absurd campaign against the head of state … They want to force me out however possible,” he claimed.

One, by the Brazilian pollster Ibope, found 48% of people in the city of São Paulo now considered his administration bad or awful.

Another, by the Datafolha group, said 51% of wealthy Brazilians and 46% of those with a university education were similarly unimpressed with his handling of the coronavirus crisis.

“We have to recognise that many Bolsonaristas are still Bolsonaristas. I have friends with university degrees – lawyers, diplomats – who believe everything he says … A very strongly Bolsonarista bastion still exists.”

“But others – who voted for him [in 2018] but are not diehard Bolsonaristas – are starting to see clearly that something is wrong and that the president lives in a parallel universe,” Cantanhêde added.

In a column published last December Cantanhêde declared Bolsonaro not just the overwhelming favourite for the 2022 election, but “unbeatable”.

Now, she believes his reaction to coronavirus has shredded those hopes.

“I think he’s fatally wounded for the election [in 2022] … If the election was held today there is a big chance Bolsonaro would be defeated,” Cantanhêde said. “This was a watershed moment.”
Add Comment