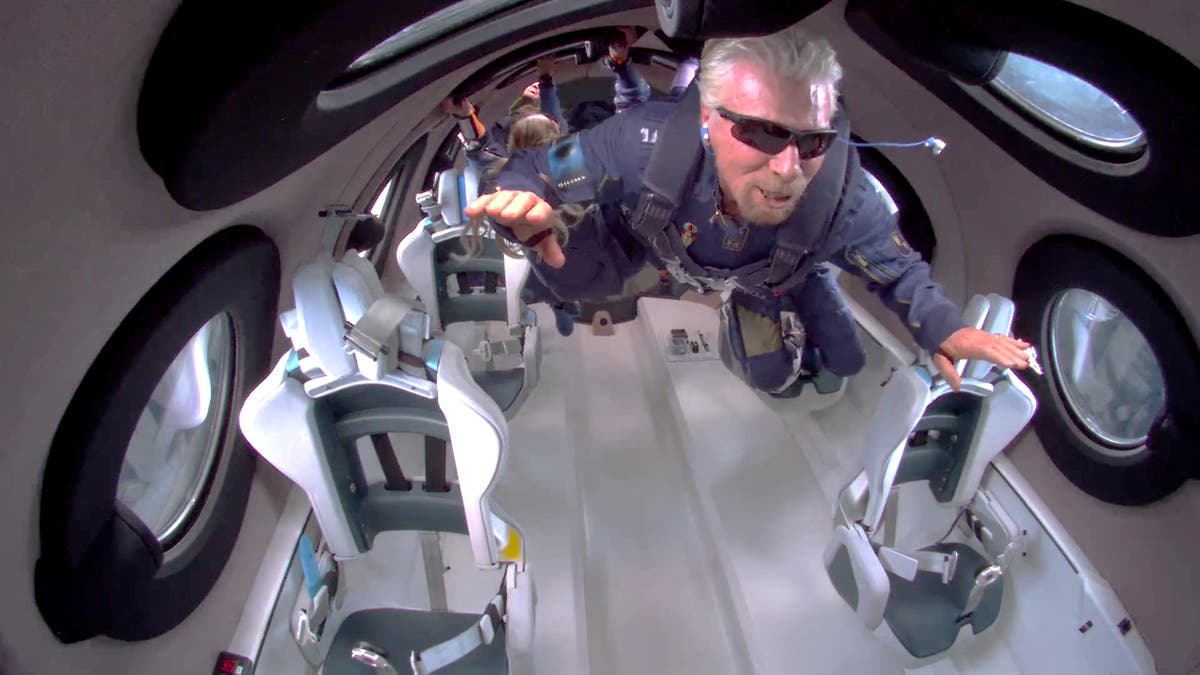 Branson vs Bezos (and Musk): inside the battle of the billionaire blokes in space

Richard Branson and Virgin Galactic have beaten the Amazon founder to the edge of space. But these boys and their (rocketship) toys are just getting started, says Samuel Fishwick

The billionaire space race has a new frontrunner.

Yesterday (July 11), Richard Branson’s big shiny space Virgin Galactic rocket plane made it 53.4 miles up to the edge of space. With five colleagues, the 70-year-old soared above the Earth on VSS Unity. “Welcome to the dawn of a new space age,” Branson said. “It’s been the experience of a lifetime... I’ve dreamed of this moment since I was a kid but honestly, nothing can prepare you for the view of Earth from space. It’s just magical.”

Branson’s space crusade came nine days before the planet’s richest person, Jeff Bezos, who will blast off on the first crewed flight by his rocket company, Blue Origin, on July 20. Not to be outdone by Branson — merely the world’s 589th richest person — Bezos will go up seven miles higher in his New Shepard rocket, just past the internationally recognized Karman Line — but he’ll be there for only four minutes.

If you think this won’t be a point of contention between adult CEOs with the power of space flight at their cheque-writing fingertips, think again. “Jeff who?”, Branson replied, when asked if he was trying to pip Bezos to the punch. 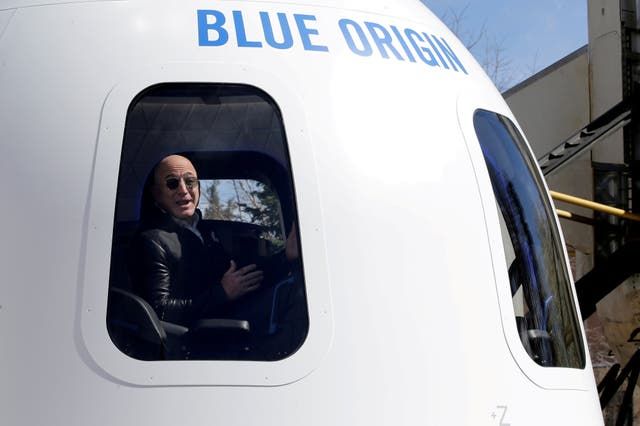 Anything you can do... Jeff Bezos will jet off to space nine days after Branson’s record-breaking flight

Mileage, minutes, and clicks are big factors in the space spat — every space billionaire needs a vast online audience watching his live streams, after all. Slick websites keep legions of Earthbound fans in the loop. In June, Bezos announced his trip to one million people via an Instagram video. “Ever since I was five years old, I’ve dreamed of travelling to space.” In the video, Bezos, wearing a cowboy hat and aviators, drink in hand, walks up to his younger brother Mark and says, “I really want you to come to space with me”.

Their crew will also be joined by a mystery bidder who spent $28 million on a ticket, and Wally Funk, the veteran US pilot, 82, who was one of the most promising female candidates for the Mercury 13 programme, before Nasa closed it in 1962. In an Instagram video, the Amazon founder asked Funk how she would feel to leave the planet. She threw her arms around him and squealed: “I would say, ‘Honey, that was the best thing that ever happened to me!’”

But this billionaire space race is not just a click measuring contest. Great leaps forward are being made. The best work to date has been done by Elon Musk’s Space X. His craft are unusual in that they are reusable, and reliably so. On April 16 Nasa awarded him $2.9bn to develop a lunar lander as part of America’s plan to return astronauts to the Moon by 2024. Bezos, who plans to step down as Amazon CEO this summer to devote more time to space, was reportedly “livid”. His bid to fly Nasa to the moon was spurned. Musk poked fun by pointing out that, unlike SpaceX, Blue Origin has made only suborbital flights so far, tweeting: “Can’t get it up (to orbit) lol.” 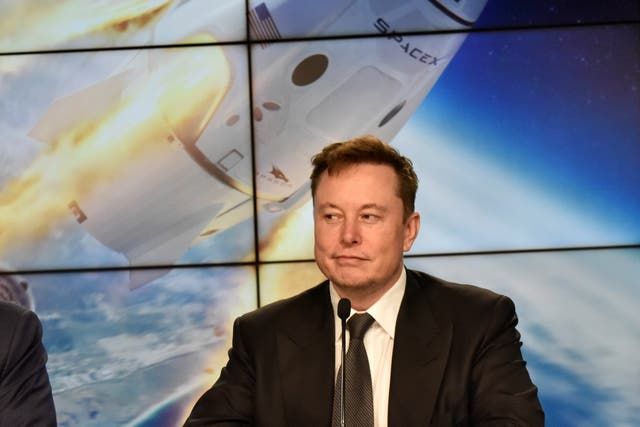 The Tesla boss, 50, is also making real money. Nifty Falcon 9 rockets already ferry other company’s satellites up to orbit regularly for $62 million a pop. His own Starlink satellite chains will be the biggest satellite network ever, beaming fast internet access to every corner of the planet. The punchier Dragon rocket has ferried crews of up to seven up to the International Space Station, and there are plans to take non-astronauts to the moon by the end of the year. But Dragon is only half the size of Starship, Musk’s jewel in the Space X crown — the vehicle he expects to take man to Mars. A super-heavy, spectacularly silver prototype successfully roared 10km into the Texas sky in May and landed, for once, without blowing up. Despite its vast size, it is fully reusable, and is intended to be far cheaper than SpaceX’s current rockets. Musk hopes Starship could end up costing less than $2 million per launch.

Bezos thinks Mars is a mug’s game. Traveling to other planets, and landing on them, requires a lot of fuel and energy, he says. He’d rather build “giant space colonies” instead. It’s a grand, slightly bonkers plan that would mean Blue Origin constructing large, rotating cylinders and dotting them around the solar system. They look like the daydreams of a 1970s space professor because, well, they are: Bezos’ Princeton professor, Gerard O’Neill, imagined them as our homes of the future. Two counter-rotating cylinders would provide gravity for human settlers while mitigating gyroscopic effects. Via artist renderings (which Bezos whips out whenever pressed), medieval Florence has been created in space, and in the distance we see a copy of Beijing’s Forbidden City.

Don’t scoff. Bezos has been serious about space since well before 2000, when he secretly set up his Blue Origin space company. In the 1990s, as Amazon took off, an ex-girlfriend told reporters that “the reason he’s earning so much money is to get to outer space.” A friend later claimed that Bezos began bulking up “in anticipation of the day that he, too, would journey to the heavens” — hence the muscle-busting gilets and disturbingly tight T-shirts of post-Noughties Jeff. As of 2016, Blue Origin was spending $1 billion a year, funded by Bezos’ sales of Amazon stock. He’s a huge sci-fi nerd — and made a cameo appearance as an alien in JJ Abrams’ third Star Trek movie in 2016. 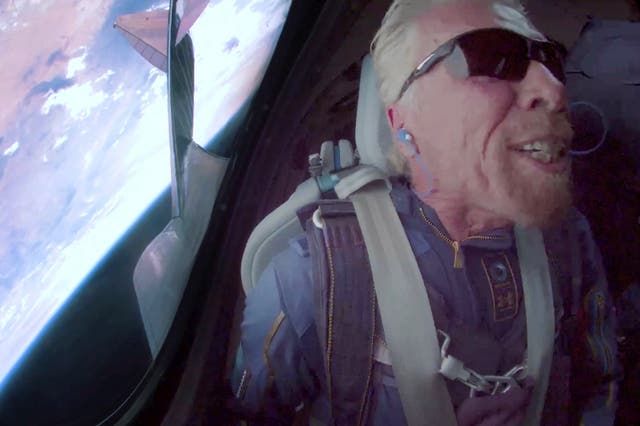 His space ideas are vaguely laudable. Giant floating space cities are a means to get grungy industry away from Earth, he says. “This is the gem of the Solar System. Why would we do heavy industry here? It’s nonsense.” Musk, who says he wants to die on Mars, is unimpressed. “Makes no sense”, he said, when asked about Bezos’ plan on Twitter. “In order to grow the colony, you’d have to transport vast amounts of mass from planets/moons/asteroids. Would be like trying to build the USA in the middle of the Atlantic Ocean!”

What about Branson? He’s the original ego-spaceflight tycoon, right? For the Virgin CEO, the space race is all about tourism and tickets. Since Virgin Galactic was founded in 2004, it’s been a bumpy — and at times tragic — ride. The low point was the death of the pilot Michael Alsbury in 2014, but he kept trying. “My mum taught me to never give up and to reach for the stars,” Branson said. His not-quite-moonshot will provide a timely boost. In March, one of Virgin Galactic’s largest backers, the tech investor Chamath Palihapitiya, sold the remainder of his personal holdings in the company for about $200m, and share prices have suffered. But Virgin Galactic has received $85m in deposits after selling tickets at a starting price of $200,000 for reservations on future flights.

Space isn’t big on diversity. If you look up right now, the population of space is 10. They’re all men. But the race is getting wider. As part of the Artemis program, named for Apollo’s sister, NASA aims to land the first woman and person of color on the moon. At least 20 African countries now have space programmes, including heavyweights such as Egypt, Algeria and Nigeria. Meanwhile, China’s flurry of space activity has seen it accelerate leader Xi Jinping’s plans to be a “great space power”. It has returned soil samples from the dark side of the moon, landed a robotic rover on Mars and begun building a space station to rival the ISS, Tiangong, or Heavenly Palace. This month three taikonauts blasted off there to spend three months tinkering on its modules.

But for now, the headlines belong to a gurning Branson, and soon Bezos — the first billionaires to boldly float weightlessly where no billionaires have floated weightlessly before. Yes, there’s a Change.org petition imploring that Bezos makes his trip one-way. But here’s looking at you, rich kids.