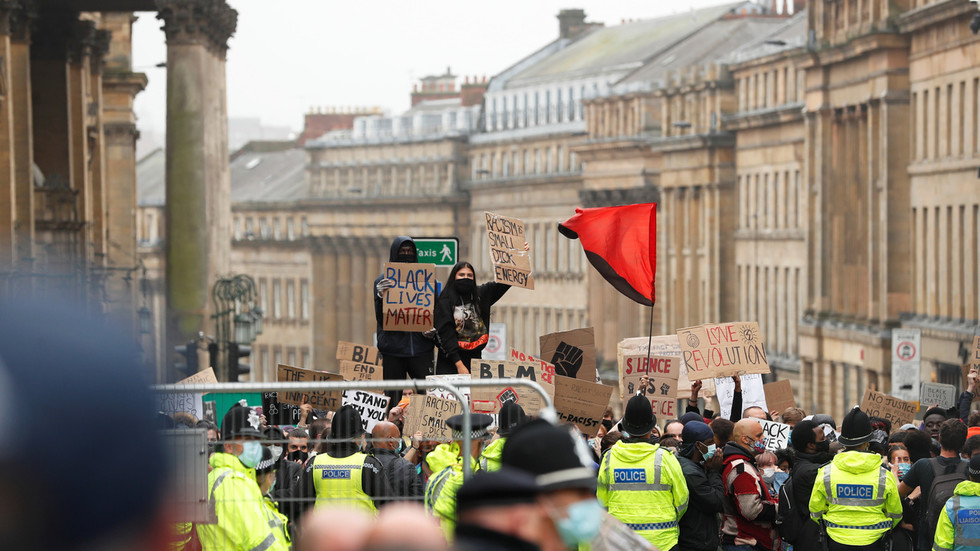 An anti-racism and anti-police brutality protest in Newcastle has been met by a large crowd of counter protesters, that gathered to “protect” local historical monuments. The tensions escalated into scuffles between rival groups.

Large groups of right-wing protesters emerged in central Newcastle on Saturday, gathering around Grey's statue and a nearby war memorial at the Old Eldon Square.

Veterans and bikers protecting this war memorial in Newcastle, they're also protecting a St George and the Dragon statue just down the street, great job all round. pic.twitter.com/2WHRiPQ6hw

The protesters have been faced by a group of the BLM activists, who appeared to be outnumbered by the right-wingers, footage from the scene indicate.

Police are all that separates BLM from locals and others in #Newcastle #NewcastleTakeover pic.twitter.com/6IoE6fLeL0

Officers tried to separate the rival groups, but protesters managed to pelt each other with bottles, smoke bombs and other projectiles.

Kicking off in Newcastle, far left attacked veterans with bottles and flares. pic.twitter.com/FqKIl1vZ7R

Mobs have recently vandalized several statues in the UK, but it was not immediately clear whether the Newcastle activists were intending to attack Grey’s Monument, which commemorates the former prime minister who abolished slavery in the British Empire back in 1833.

Britain and other Western nations have been gripped by anti-racism and anti-police brutality protests since the killing of black civilian George Floyd in Minneapolis in late May.