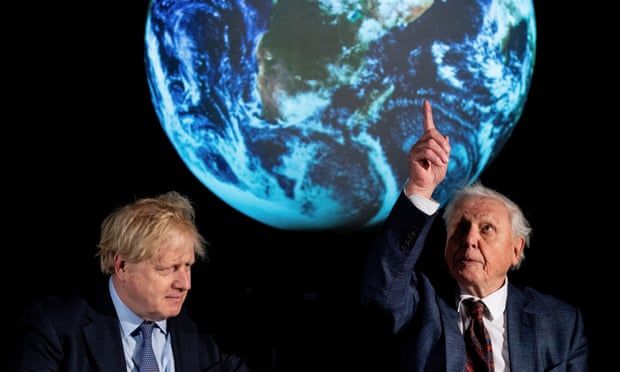 Boris Johnson urges leaders to ‘get serious’ at climate summit

Prime minister calls on countries to come to Cop26 ‘armed with ambitious targets and plans’
With just over six months to go until vital UN climate talks, johnson">Boris Johnson has urged world leaders at a virtual White House summit to step up with plans for cutting greenhouse gas emissions this decade.

“It’s vital for all of us to show that this is not all about some expensive politically correct green act of ‘bunny hugging’ or however you want to put it,” the prime minister told the possibly slightly puzzled leaders. “Nothing wrong with ‘bunny hugging’ but you know what I’m driving at.”

“Cake have eat,” he went on to suggest as an overriding motto, arguing that reducing carbon emissions could also be good for the economy. This followed his famous line on Brexit that when it came to cake he was “pro having it and pro eating it”.

But green experts said Johnson was failing to match rhetoric with action and that the UK would need to bring forward clear new policies and sweeping changes to government departments to show the leadership needed to galvanise action around the world.

President Joe Biden of the US, the world’s second biggest emitter, made a new pledge to halve his country’s emissions by 2030 compared with 1990 levels, which was cheered by many leading climate experts, though some campaigners said the US should go further. Japan and Canada also brought forward tougher targets.

However, China, the world’s biggest emitter, has still to set out details of its plans for emissions in the next decade. Its current target, announced last year, of emissions peaking by 2030 is regarded as insufficient, and climate analysts are calling for the country to set a peak date of 2025.

The emissions pledges, called nationally determined contributions, are the bedrock of the 2015 Paris climate agreement, and essential to meeting its goals of holding global temperature rises to well below 2C, and preferably no more than 1.5C, above pre-industrial levels.

Governments will meet in November in Glasgow for the UN Cop26 climate summit to assess the pledges and try to get on track to meet the Paris goals. Even with the announcements at the US climate meeting on Thursday, the world is still far off track, and the UK, as host of the vital talks, will face a difficult diplomatic task.

Johnson has accepted the recommendations of the UK’s Climate Change Committee to cut greenhouse gas emissions by 78% by 2035, and by 68% by 2030.

He called on other nations to follow suit. “The UK has shown that it’s possible to slash emissions while growing the economy, which makes the question of reaching net zero not so much technical as political,” he said. “If we actually want to stop climate change, then this must be the year in which we get serious about doing so. Because the 2020s will be remembered either as the decade in which world leaders united to turn the tide, or as a failure.”

He called on all countries to come to Glasgow in November “armed with ambitious targets and the plans required to reach them. And let the history books show that it was this generation of leaders that possessed the will to preserve our planet for generations to come.”

However, the UK has surprised many leading figures in climate diplomacy with recent actions that many said appeared to run counter to the government’s green ambitions. Chief among these has been the cut in overseas aid, from 0.7% to 0.5% of GDP, which experts said would hurt countries trying to cope with the impacts of climate breakdown, although climate aid is ringfenced at £11.6bn over five years.

The initial green light for a new coalmine in Cumbria also raised questions, as did UK support for Australia’s climate sceptic former minister Mathias Cormann as next head of the OECD. There were also a series of domestic measures – including new oil and gas licences in the North Sea; the scrapping of the green homes grant for insulation and low-carbon heating; airport expansion; and reducing incentives for electric cars – that observers said appeared to show a lack of joined-up thinking on green issues across the government.

Labour’s Ed Miliband, the shadow business secretary, who led the UK delegation at the Copenhagen climate summit in 2009, said the government must push nations harder to strengthen their targets further, in order to make Cop26 a success. “We should not think that pledges made in April are the last word ahead of a summit in November,” he said. “There is room to do more.”

But he added that in order to do so, the UK government would need a more convincing strategy. “What they’re doing, with the overseas aid cut, the new coalmine, and so on – we would have greater strength and greater moral authority if we were talking the walk instead of just talking the talk.”

Experts have warned that the government needs to do far more to embed climate targets across all departments for a coherent approach. Support from the Treasury will be key, but many think the signs are so far that the Treasury has failed to grasp the challenge.

Caroline Lucas, the Green party MP, said: “If [the business secretary] Kwasi Kwarteng thinks the energy white paper, the prime minister’s 10-point plan and a few more offshore wind turbines will result in the UK reaching its new 2035 climate target, then he doesn’t understand the science. They won’t even deliver on earlier, weaker targets, let alone get us to 78% emissions reductions by 2035.

“The attitude of this government is keep your fingers crossed and hopefully something will turn up. There is no willingness to engage in some of the critical political choices that need to be made and schemes which are launched and then abandoned.”
#Joe Biden  #Boris Johnson  #Johnson
Add Comment