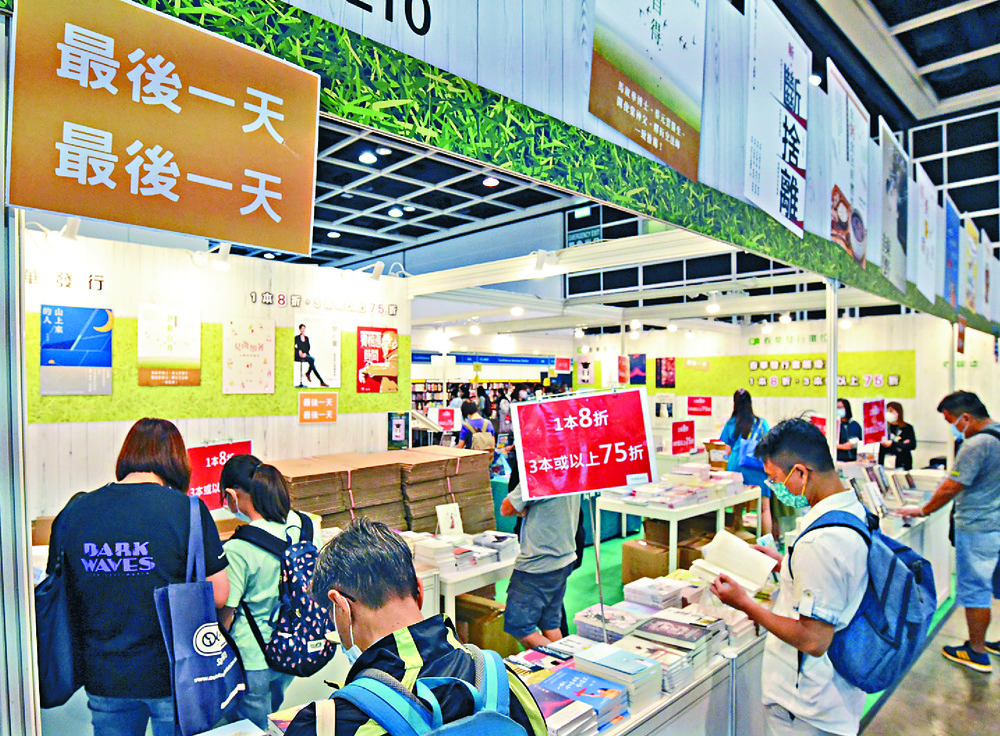 Book fair has quite a happy ending

Dealers and exhibitors managed a solid finish to the seven-day Hong Kong Book Fair despite 15 percent fewer visitors this year compared to 2019.
The fair wrapped up yesterday afternoon in stormy weather, with the No 1 signal in force when it ended.

More than 830,000 visitors attended the fair as well as the concurrent Sports and Leisure Expo and World of Snacks at the Hong Kong Convention and Exhibition Centre.

A 15-year-old student, Wong, said the number of visitors was "way fewer" than what she expected on the final day.

The Hong Kong Trade Development Council had also offered around 30,000 free admissions to visitors who had at least one shot of Covid-19 vaccine.

Still, the TDC reckoned visitors had spent an average HK$817 after interviewing more than 800 visitors.

More than 760 exhibitors joined the fair this year, and many of them sought to boost their takings with last-day discounts.

Among them, Idea Publication dropped its prices for illustration books and comics to HK$10 each. Match Media, which sells books ranging from travel to parenting, offered a "buy one, get one free" book deal.

Raymond Lam, a project director from Match Media, said sales were better than in 2019 but were still less when compared to years before.

Hillway Culture, which sold books related to the unrest, also reckoned it achieved a sales increase this year.

Executive Sam Cheng said "many people were interested in books we sell," though "for us the books are just a record of the truth."

Hillway is said to have received a letter last week from the TDC on complaints that three of its books were thought to be violating the national security law.

One of the titles was A Journey Through the Brick Wall by former liberal studies teacher Raymond Yeung Tsz-chun, who was allegedly blinded in one eye by a police projectile in the 2019 unrest.

But by yesterday the book had sold out, though a poster for it still featured.

Ken Chan, a sales director for Magazines International, estimated there was a drop in sales of up to 20 percent compared to previous years despite subscription incentives. But the performance was "still better than expected," he added.

Ani-com will run at the Hong Kong Convention and Exhibition Centre from Friday to Monday.
#COVID-19  #vaccine  #Covid
Add Comment