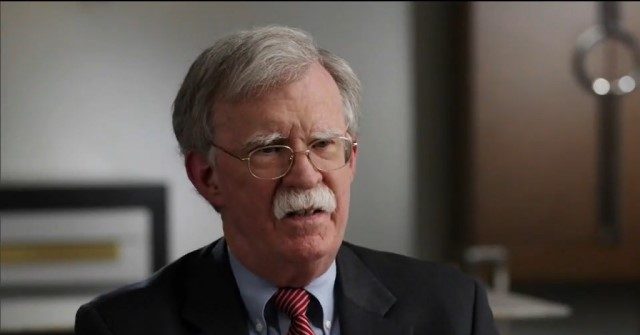 In a Sunday interview which aired on ABC News, former National Security Advisor John Bolton said his “hope” is that history remembers President Donald Trump as a “one-term president who didn’t plunge the country irretrievably into a downward spiral” from which it cannot recover.
Bolton told ABC News that Trump "directly linked the provision of that [security] assistance with the investigation" into former Vice President Joe Biden and his son Hunter Biden in Ukraine — the central allegation that saw him impeached in the House and later acquitted in the Senate. No official that testified was a direct witness to Trump explicitly tying aid to the investigations.

As he discussed his forthcoming tell-all book, “The Room Where It Happened,” Bolton emphasized he does not believe Trump to be a conservative Republican nor “competent to serve” as commander in chief.

“I’ve made my case about the president’s not being a conservative and not being competent to serve in the book,” Bolton told ABC News chief global affairs correspondent Martha Raddatz.

Raddatz asked, “How do you think history will remember Donald Trump?”

Bolton replied, “I hope it will remember him as a one-term president who didn’t plunge the country irretrievably into a downward spiral we can’t recall from. We can get over one term. Two terms, I’m more troubled about. Decisions are made in a very scattershot fashion, especially in national security policy. It’s a danger for the republic.”

"They pushed the Republicans in the House into unanimous opposition to their view. And they essentially did the same thing to Republicans in the Senate. This was a partisan play. It was not a Constitutional process. I judge that to be almost as irregular as what they were accusing Trump of doing.

"The Democrats can pursue whatever policy they want. They don't dictate to me how best to bring this to the attention of the American people. You can agree or disagree with the way I tried to do it, but I don't think anybody is required to engage in futile activity to satisfy the Democratic congressional leadership."