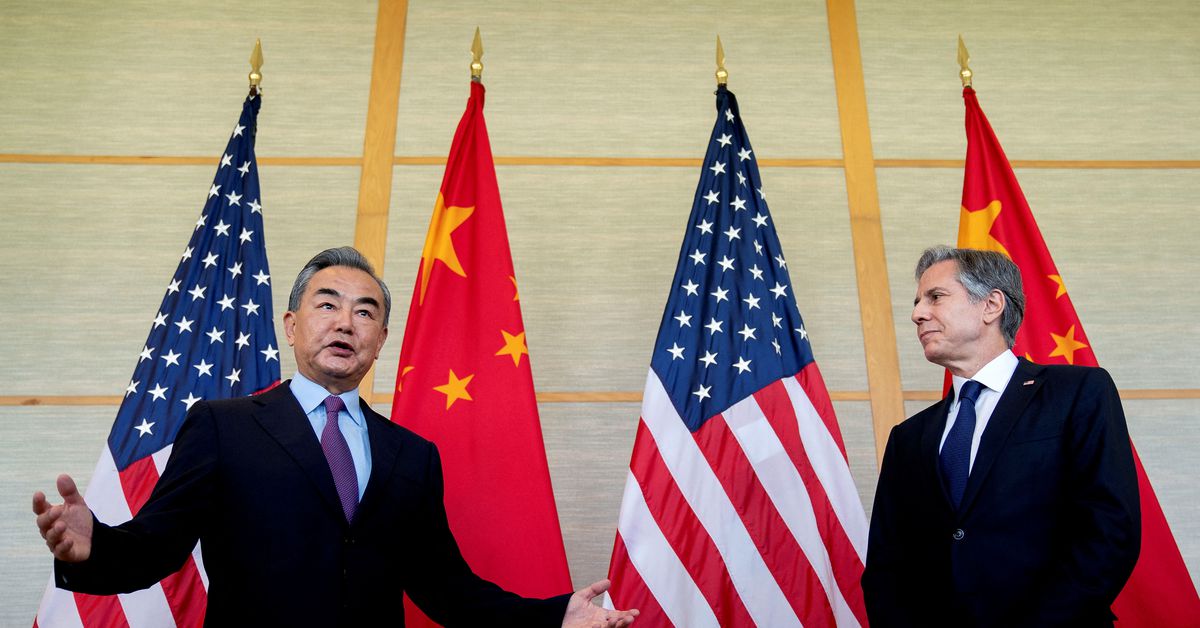 U.S. Secretary of State Antony Blinken said on Saturday he had discussed Russian aggression in Ukraine during more than five hours of talks with Chinese Foreign Minister Wang Yi, and raised concerns over Beijing's alignment with Moscow.

Both diplomats described their first in-person talks since October as "candid", with the meeting taking place a day after they attended a gathering of G20 foreign ministers on the Indonesian island of Bali.

"I shared again with the state councillor that we are concerned about the PRC's alignment with Russia," Blinken told a news conference after the talks, referring to the People's Republic of China.

He said he did not think China was behaving in a neutral way as it had supported Russia in the United Nations and "amplified Russian propaganda".

After the meeting, a U.S. official said "neither side held back".

"We were very open about where our differences are ... but the meeting was also constructive because despite the candour, the tone was very professional," the official said.

Blinken said Chinese President Xi Jinping had made it clear in a call with President Vladimir Putin on June 13 that he stood by a decision to form a partnership with Russia.

Shortly before Russia's Feb. 24 invasion of Ukraine, Beijing and Moscow announced a "no limits" partnership, although U.S. officials say they have not seen China evade tough U.S.-led sanctions on Russia or provide it with military equipment.

U.S. officials have warned of consequences, including sanctions, should China offer material support for the war that Moscow calls a "special military operation" to degrade the Ukrainian military. Kyiv and its Western allies say the invasion is an unprovoked land grab.

Asked about his refusal to hold talks with Russian Foreign Minister Sergei Lavrov at the G20, Blinken said: "The problem is this: we see no signs whatsoever that Russia, at this moment in time, is prepared to engage in meaningful diplomacy."

Wang exchanged in-depth views on "the Ukraine issue" during Saturday's talks, according to a statement released by his ministry, without giving details.

He also told Blinken that the direction of U.S.-China relations was in danger of being further led "astray" due to a problem with the United States' perception of China.

"Many people believe that the United States is suffering from an increasingly serious bout of 'Sinophobia'," Wang was quoted as saying.

U.S. officials had said before the talks that the meeting was aimed at keeping the difficult U.S.-China relationship stable and preventing it from veering inadvertently into conflict.

Daniel Russel, a top U.S. diplomat for East Asia under former President Barack Obama who has close contact with Biden administration officials, said ahead of the talks a key aim for the meeting would be to explore the possibility of an in-person meeting between Biden and Xi, their first as leaders.

The United States calls China its main strategic rival and is concerned it might one day attempt to take over the self-ruled democratic island of Taiwan.

Despite their rivalry, the world's two largest economies remain major trading partners, and Biden has been considering scrapping tariffs on a range of Chinese goods to curb surging U.S. inflation before November midterm elections.