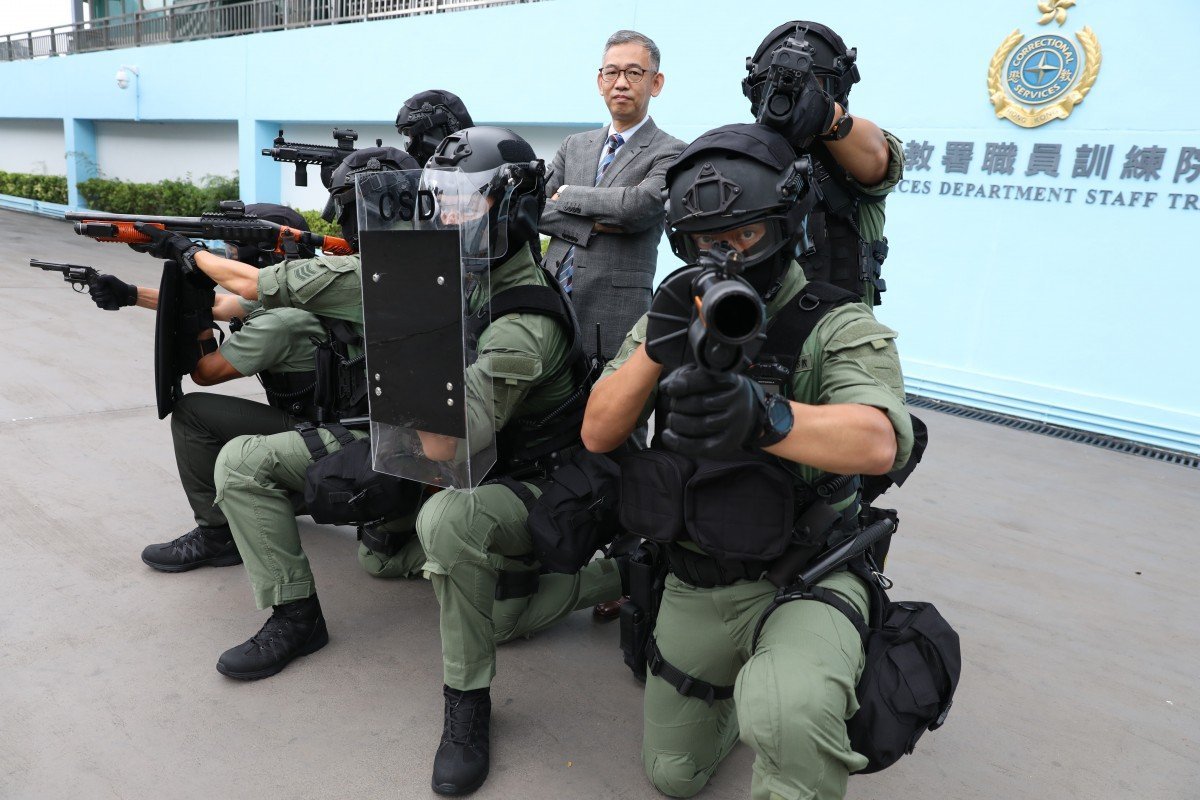 Hong Kong’s elite “Black Panther” prison unit has armed itself with some of the newest riot weapons on the market to guard against a possible threat posed by radicals swelling the ranks of the city’s inmates.

In an exclusive interview with the Post, the Commissioner of Correctional Services Woo Ying-ming unveiled the latest tactical gear and said he was preparing for “the worst possible riots”.

Among the weapons now at the unit’s disposal is a rapid-fire riot gun that allows officers to shoot six sponge-tipped rounds containing pepper powder that burst on impact. The combination increases the effectiveness of the weapon in disabling a target and saves time on reloading.

“The gear is more advanced, effective and powerful, but less lethal,” Woo said. 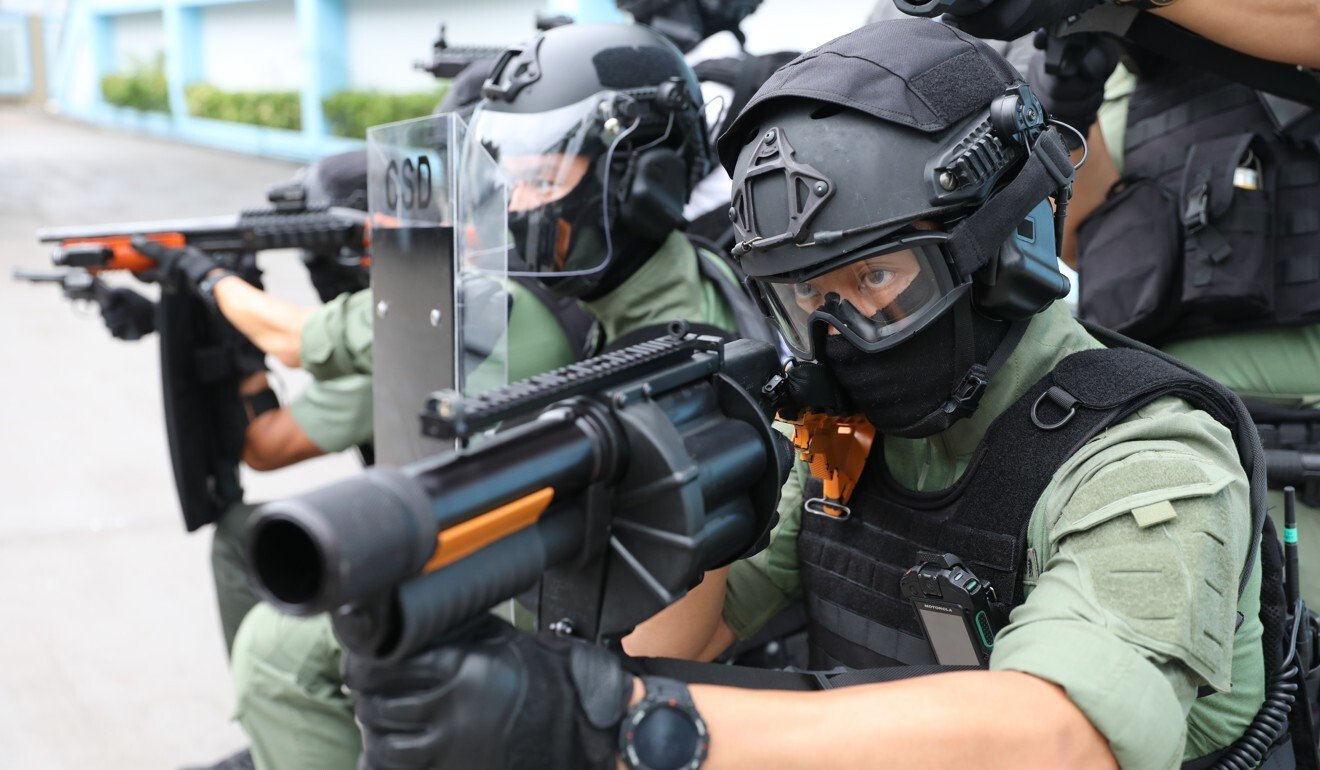 Woo’s approach to effective riot control has been moulded by his experiences during the Hei Ling Chau Drug Addiction Treatment Centre riot 20 years ago, when a clash between local and Vietnamese inmates resulted in about 400 laying siege to the centre.

Order was only restored the next day after police and prison officers broke up the crowd. More than 30 inmates and officers were injured in the incident.

Woo remembers the equipment being insufficient and reinforcements slow to arrive. For the prison chief, control now needs to be done “quickly, resolutely, and precisely”.

“We need the finest gear,” he said, adding the new weapons could help maintain a safe distance between officers and inmates.

“There could be only a few officers dealing with more than a hundred inmates at the start [of a riot],” he said. “We need to secure the safety of our officers, and of inmates too, as the weapons are now not lethal. The faster we handle the situation, the fewer casualties.”

As well as increasing effectiveness, the upgraded weapons were a better fit for the tight confines of a prison, the chief said, and intimidating to look at. The new alternatives also remove the threat of fire and suffocation posed by tear gas when used indoors. 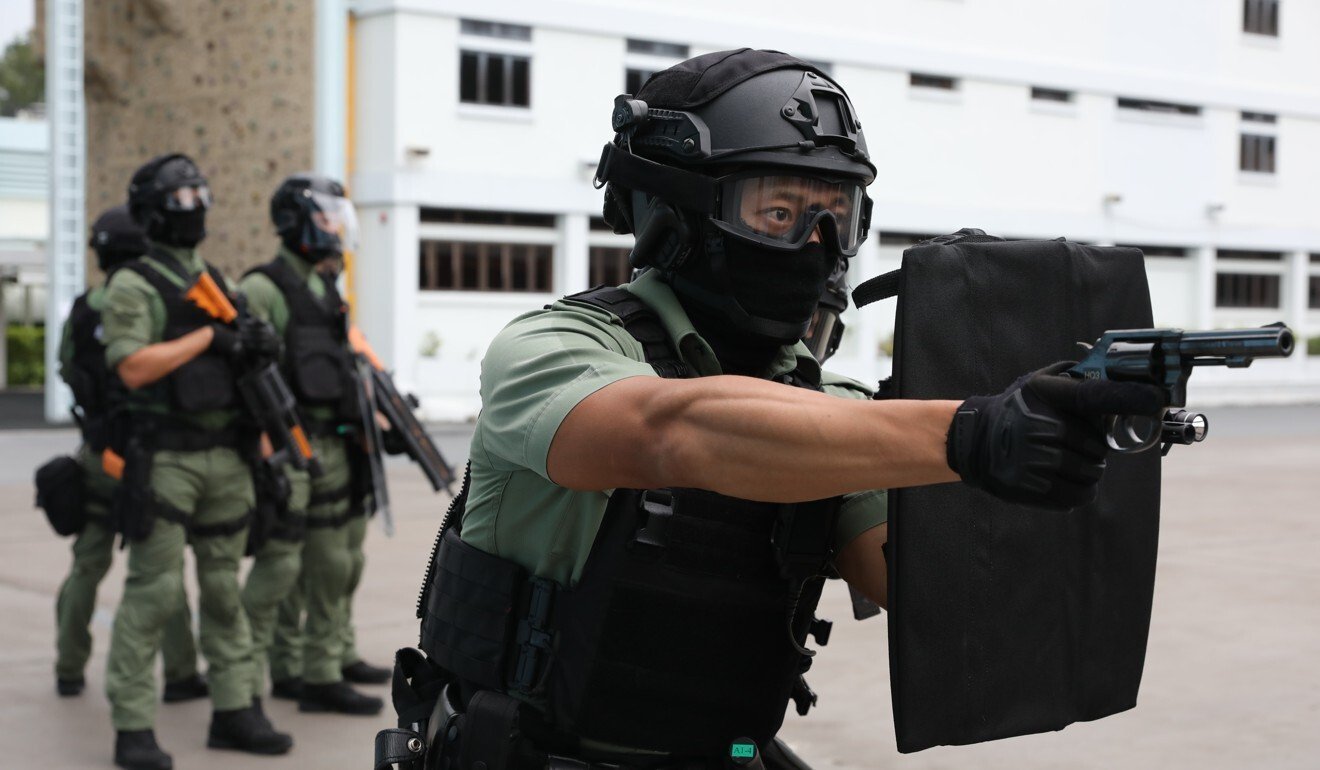 The non-lethal rounds can also be fired through the bars of a prison cell.

Members of the Regional Response Team, which Woo established in 2016, must receive more than 11 weeks of tactical and firearms training to escort high-risk inmates, and deal with riots and other emergencies in Hong Kong’s prisons.

They are generally equipped with pepper spray, pepper-ball launchers and now an upgraded tactical pump-action shotgun for firing beanbag rounds or rubber bullets that has triple the loading capacity of the traditional model.

Two bulletproof escort vehicles are expected to arrive in 2022, and when moving high-risk prisoners, team members also have access to submachine guns, .38 revolvers and rifles. 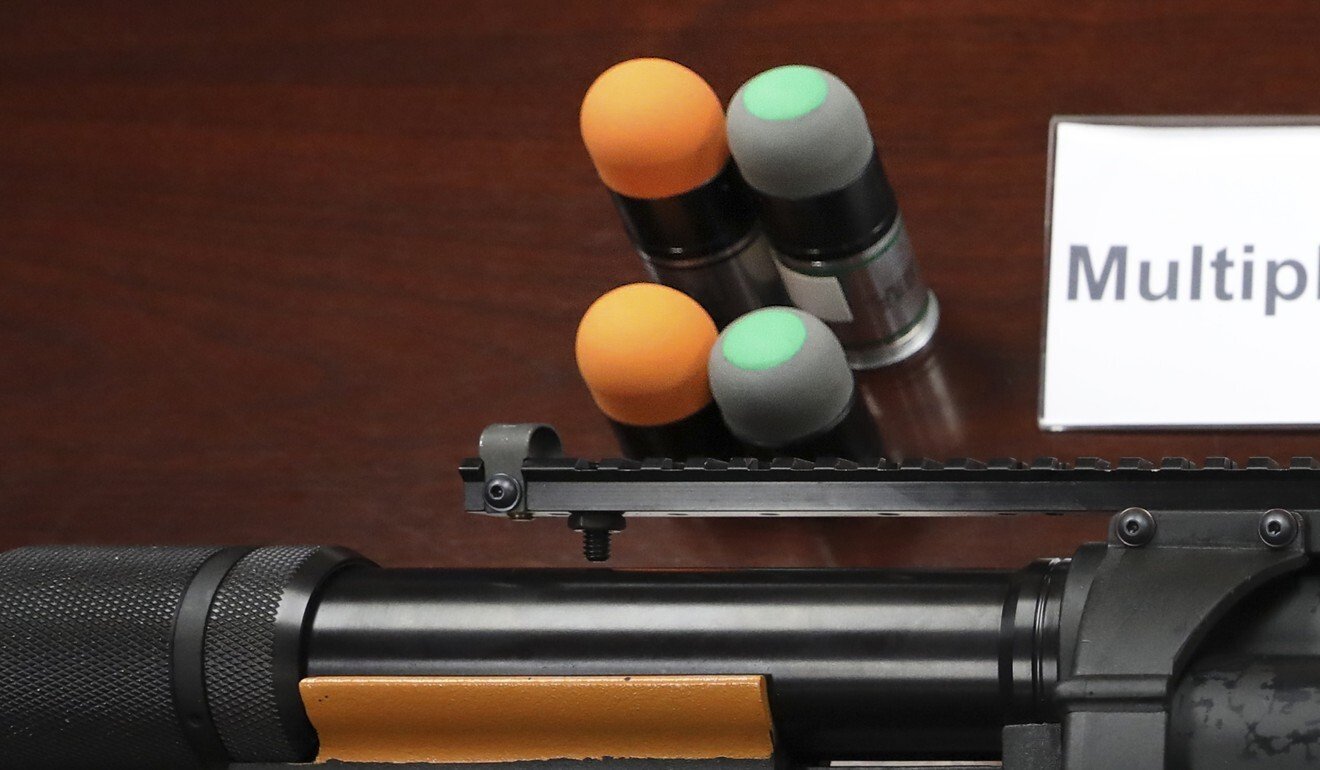 An increase in plots to help people escape from prison led to the weapons upgrade, with Woo revealing that in one instance a gang had planned to attack a convoy as an inmate was being taken to court.

The prison chief said the attack failed to materialise because the Black Panthers and police threw a security blanket over the convoy in a joint operation.

Woo added that given more individuals with violent backgrounds, such as those with convictions for making explosives and assault, had been jailed over the past year, he expected trouble and had told his officers to prepare for prison riots.

“When the like-minded gather, naturally they will commit acts of indiscipline,” he said. “We are prepared for the worst, but we won’t use the weapons lightly. We follow the use of force guidelines.” 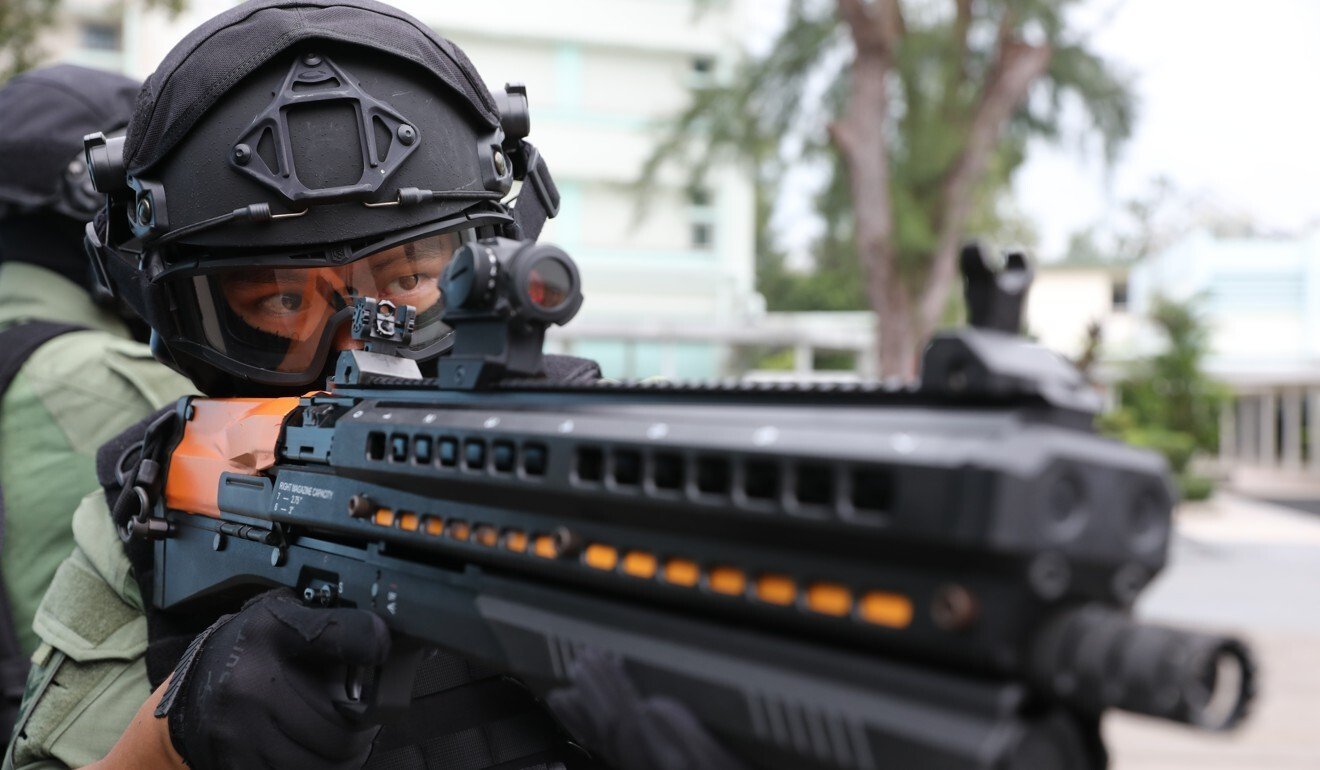 The department recorded six cases of concerted acts of indiscipline in the first eight months of this year, the same number as in the whole of 2019.

The special unit was deployed four times to handle emergencies in penal institutions, compared to three times in 2019. Woo said he would expand the riot team by “multiple folds” but did not give a specific number.

An anti-stab tactical vest and a tactical suit, which is flame retardant, waterproof, paint resistant and can withstand corrosive substances and cutting, have also been designed by the department.

Arm shields and some of the shotguns are now foldable, allowing easy storage and carrying. The shield can be extended for better protection when officers are attacked.

Since last November, more than 100 specialists in prison riot control have been enlisted by police as special constables. They are used to guard important sites in Hong Kong to ease the burden on a force stretched to the limit by anti-government protests.

Woo said the special constables from his department would not carry the new weapons, but stick with the gear available to police officers.

Commenting on the decision by the United States to end controlled-defence exports to Hong Kong in response to Beijing’s move to pass the national security law in the city, Woo said the department was not affected as he could get more advanced weapons from other sources.