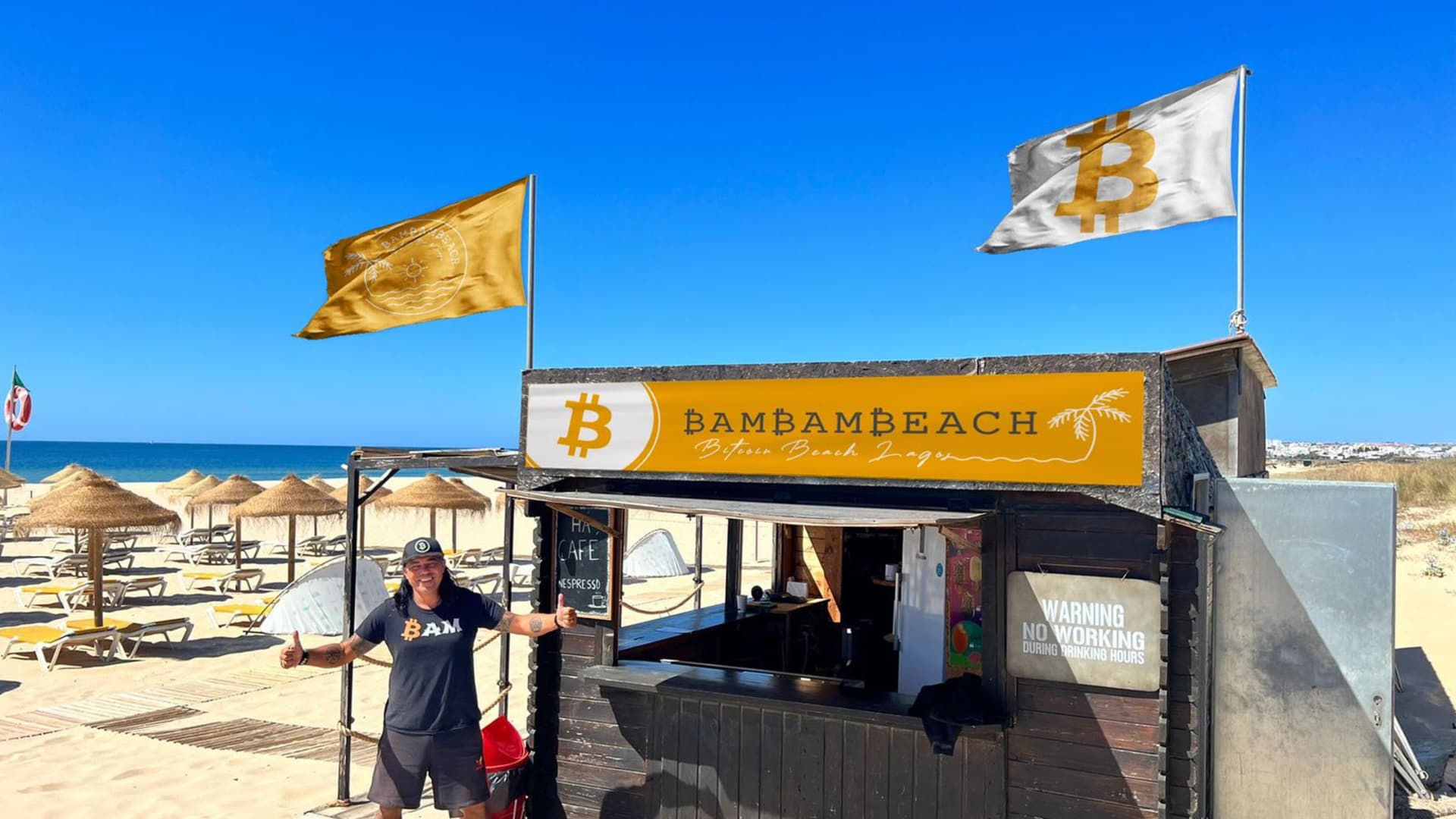 Bitcoin Family say they lost $1 million on their investment this year, but sold a lot at peak

The "Bitcoin Family" is down more than $1 million on their bitcoin investment since the world's most popular digital coin peaked at around $69,000.

The “Bitcoin Family” is down more than $1 million on their bitcoin investment since the world’s most popular digital coin peaked at around $69,000 in Nov. 2021 — but patriarch Didi Taihuttu is as bullish as ever.

“I’m buying bitcoin daily,” Taihuttu told CNBC by phone from a beach in Lagos, Portugal. “For me, the lesson I learned the last two cycles is — when the whole world is freaking out and when everybody is thinking that bitcoin will crash, I am slowly zooming out, and I’m buying bitcoin.”

In 2017, Taihuttu, his wife, and three daughters liquidated all they owned, trading a 2,500-square-foot house and virtually all their earthly possessions for bitcoin and a life on the road. This was back when the price of bitcoin was around $900. Bitcoin is currently trading around $19,200.

Along the way, Taihuttu has exited his bitcoin position and subsequently bought back in, trading his coins at opportune moments.

“That’s the bitcoin life,” he said.

Taihuttu tells CNBC that he sold about 15% of the family’s overall bitcoin holdings when the price fell to the $55,000 price level in late November.

″$55,000 for me was the confirmation that we would go lower,” continued Taihuttu. 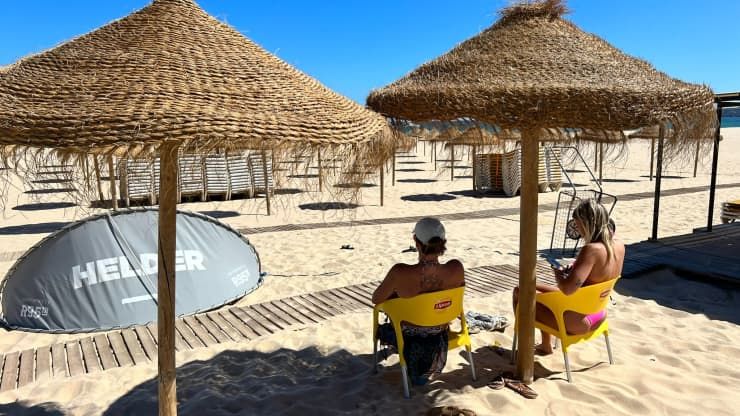 Romaine and Joli Taihuttu on a beach in Lagos, Portugal

Extreme volatility is the price of doing business in the digital asset market. In the last decade, bitcoin has experienced two prolonged periods of depressed prices before it rebounded. In the previous crypto winter in 2018, bitcoin lost more than 80% of its value before bouncing back, eventually rising to its all-time high last year.

“There is still an aspect in crypto that we are waiting to see if another shoe will drop, if another entity will fail, if the credit cascade will continue,” said Matt Hougan, chief investment officer at Bitwise Asset Management, in an interview.

“If your timeframe is a week, or a month, or even a quarter, I think there’s still significant volatility. If you have a time horizon measured in years, then yes, this is a great opportunity to think about entering the market,” continued Hougan.

Taihuttu — who studies crypto market price charts and follows popular indicators like the Mayer Multiple — thinks in the current price cycle, bitcoin will bottom out somewhere between $15,000 to $20,000, before bouncing up to above $140,000 by 2025. And right now, according to Taihuttu, is the “ultimate buying moment.”

His investment strategy has worked out pretty well thus far. Taihuttu tells CNBC his portfolio has gained more than 2,000% in the last six years.

“Slowly, people will understand that being in bitcoin and HODLing is more profitable than always trying to catch that altcoin that will go times thousands,” said Taihuttu.

In the last six years, the Dutch family of five has traveled the world. But after spending time in 40 countries, they decided to lay down some roots in Portugal — which is one of the last places in Europe with a 0% tax on bitcoin.

Taihuttu’s latest project is running a bitcoin bar on one of the most popular beaches in Lagos, in order to “lead by example.” He also plans to spread the gospel of bitcoin by converting all vendors along that stretch of sand into Lightning-friendly retailers. Lightning is a payments platform built on top of bitcoin’s base layer that enables virtually instantaneous and low-fee transactions.

“I think it will take me about six months, and I will have this whole beach accepting bitcoin,” he said.

The family’s faith has been tested this past year. It has been a rough few months for the crypto market, as token prices plummet and some of the most popular companies in the industry go belly up.

The chaos has spooked investors, erasing more than $2 trillion in value in a matter of months — and wiping out the life savings of retail traders who bet big on crypto projects billed as safe investments. On Thursday, bitcoin posted its worst quarterly loss in more than a decade. 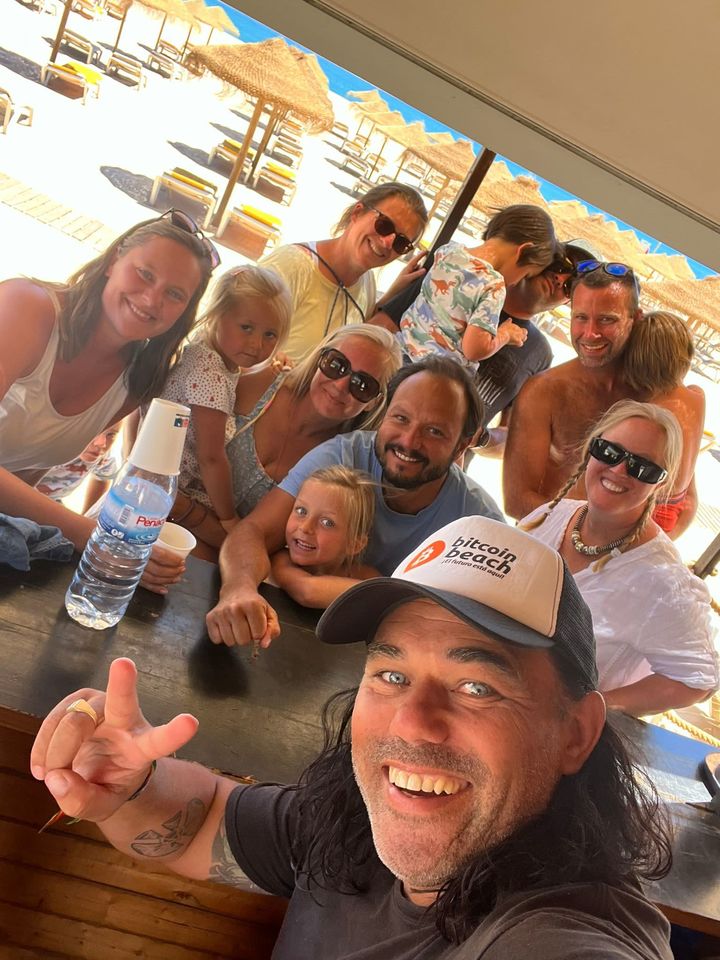 First clients paying in bitcoin at the Taihuttus’ beach bar in Lagos, Portugal

To stay “emotionally grounded” when faced with this level of volatility, the Dutch family of five follows what they call the 70/30 rule.

At any one time, the Taihuttus keep 70% of their bitcoin holdings in cold storage (which is inaccessible without physically going to retrieve it), and the other 30% in a hot wallet, meaning that the coins are connected to the internet, whether through a mobile phone wallet or an online exchange.

Of the 30% crypto stash, some is kept in bitcoin, and the rest is in a mix of U.S. dollar-pegged stablecoins including tether, USDC, and dai. This kind of “hot” storage allows owners relatively easy access to their tokens so that they can access and spend their crypto. The trade-off for convenience is potential exposure to bad actors.

“Every time our capital increases, I make sure that 70% is on the cold storage, so then I’m not able to touch it from there,” explained Taihuttu.

Taihuttu has gone out of his way to make his cold wallets especially difficult to access.

Most of the family’s crypto fortune is in secret vaults on four different continents, including two hiding spots in Europe, another two in Asia, one in South America, and a sixth in Australia. None of the sites are below ground or on a remote island, but the family told CNBC the crypto stashes are hidden in different ways and in a variety of locations, ranging from rental apartments and friends’ homes to self-storage sites. 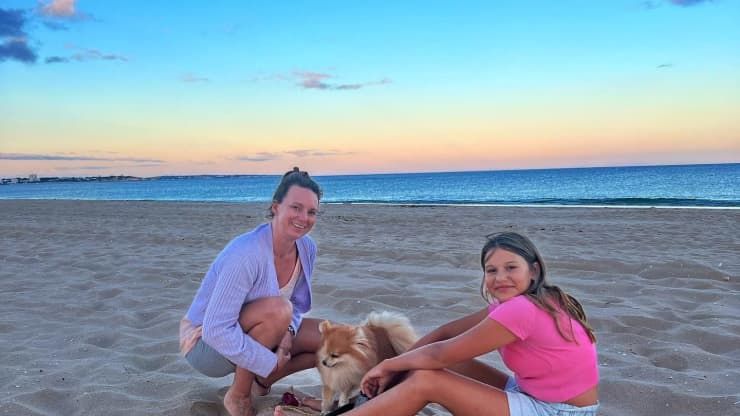 Teddy, the Taihuttus’ dog, on a beach in Lagos, Portugal with Jessa and Romaine

The Taihuttus also hide the seed phrases (that is, a unique grouping of 12 to 24 words used to access digital assets) on the same continent as their corresponding hardware wallet, but in different countries. Seed phrases are different to the private keys used to access crypto wallets — but it is crucial that users keep a record of both.

“Cold storage often refers to crypto that has been moved to wallets whose private keys – the passwords that enable the crypto to be moved out of the wallet – are not stored on internet-connected computers, so that hackers can’t hack into the computer and steal the private keys,” said Philip Gradwell, chief economist of Chainalysis, a blockchain data firm.

Beyond the upside of basic cyber hygiene and safeguarding his tokens against bad actors, Taihuttu has also gone out of his way to protect his holdings from himself.

“I think if I had those hardware wallets with me, I would maybe be more emotionally involved, and maybe when I see bitcoin dipping, then I would grab the hardware wallet and start to sell or buy,” he said.

That said, the Dutch father of five says he’s never too far from either his ledger or the seed phrases.

“I can always fly cheap with RyanAir or AirAsia. In three hours, I’m there.”

Of the bitcoin that the Taihuttus have squirreled away around the world, nearly all of their coins are non-KYC’ed — meaning they’re not subject to “Know Your Customer” rules that centralized exchanges require to prevent them from being used to launder money or engage in other illegal activity. That means that no one, including governments or friends, know exactly how much the Bitcoin Family has stored.

To do this, Taihuttu has bought much of his bitcoin over-the-counter.

“There are lots of forums where you can still buy bitcoin with cash,” Taihuttu told CNBC.

“Every country has its own desk. There’s one in Mexico that does up to a million dollars per day in cash,” continued Taihuttu, though he noted that you may have to buy at a premium when you purchase OTC.