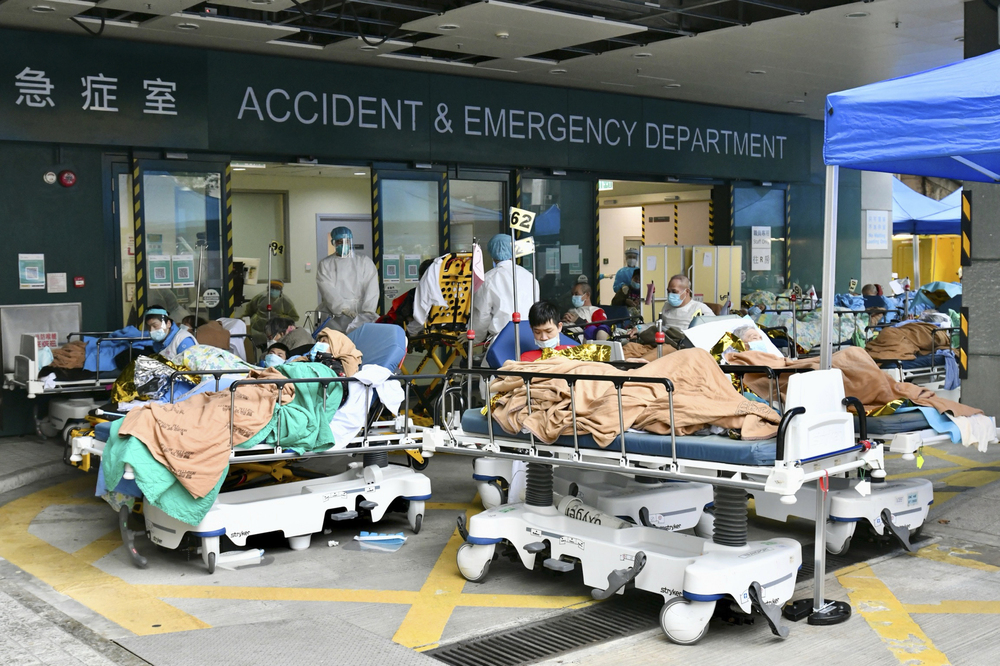 Hong Kong is now dealing with a bigger Covid crisis than the outbreak in Wuhan that heralded the start of the pandemic, throwing into doubt whether China’s Covid Zero playbook of mass testing, isolation and quarantine can stamp it out.
Daily cases in the city have surged to more than 6,000 from a little over 100 in less than a month, topping anything seen in China’s initial wave centered around Wuhan, when a backlog of reporting saw daily cases spike above 15,000. That, and subsequent outbreaks in China, were brought under control by lockdowns that Hong Kong Chief Executive Carrie Lam said are off the table.

Instead, authorities are planning to test each of the city’s 7.5 million residents while turning hotels into isolation centers. However, the testing blitz won’t start until next month, raising concerns the virus will run rampant in the meantime, further straining an already overwhelmed health system.

“Lining up and gathering for testing presents a huge infection risk,” said Jin Dong-Yan, a virologist at the University of Hong Kong. “If the case load reaches tens of thousands as predicted, mass testing will only make things go from bad to worse. What you need to do is to avoid contact as much as possible.”

The thousands of daily infections means the opportunity to deploy mainland China’s strategy of mass testing to disrupt transmission has already been lost, Jin said.

“In China they are only able to do this because infections are so low so they can shoot mosquitoes with cannon balls.” he said, referring to the outsized response mainland authorities mount at the detection of just a handful of cases.

While more is now known about the virus and how to treat it than when it first appeared in Wuhan, Hong Kong is also dealing with the more-infectious Omicron variant. And while more than 10 billion vaccine doses have been administered worldwide, just 35% of Hong Kong residents aged 80 or above have been inoculated, leaving them particularly vulnerable.

Authorities should now aim to mitigate the spread of Covid, rather than seeking to bring cases back to zero, said Ben Cowling, an epidemiologist at the University of Hong Kong.

“That means home isolation, home quarantine, and rapid testing to inform people’s behavior,” Cowling said in an interview on Bloomberg Television. “At the moment we’re still seeing every case is supposed to be admitted to hospital. This can’t continue.”

Hong Kong is struggling to increase its testing capacity from the current level of just 20,000 a day. Hospitals have also filled up due to the rigid policy of admitting all confirmed infections, even if people are symptom-free. The Hong Kong government is also scrambling to convert hotel rooms into isolation centers while waiting for the mainland to help build a giant isolation facility.

“I wouldn’t rule out hundreds of thousands of infections that could be detected by this mass testing exercise,” Cowling said. “Where would all these cases be put. because we simply don’t have the isolation facility for that many people.”

Lawmaker Michael Tien described the lack of ample isolation facilities as the main obstacle to applying the mainland’s Covid Zero playbook. Mass testing can only be possible after there’s 20,000 to 30,000 isolation units available, he said.

“This is actually more about damage control, I think, at this point,” Tien said.
#vaccine  #Covid
Add Comment