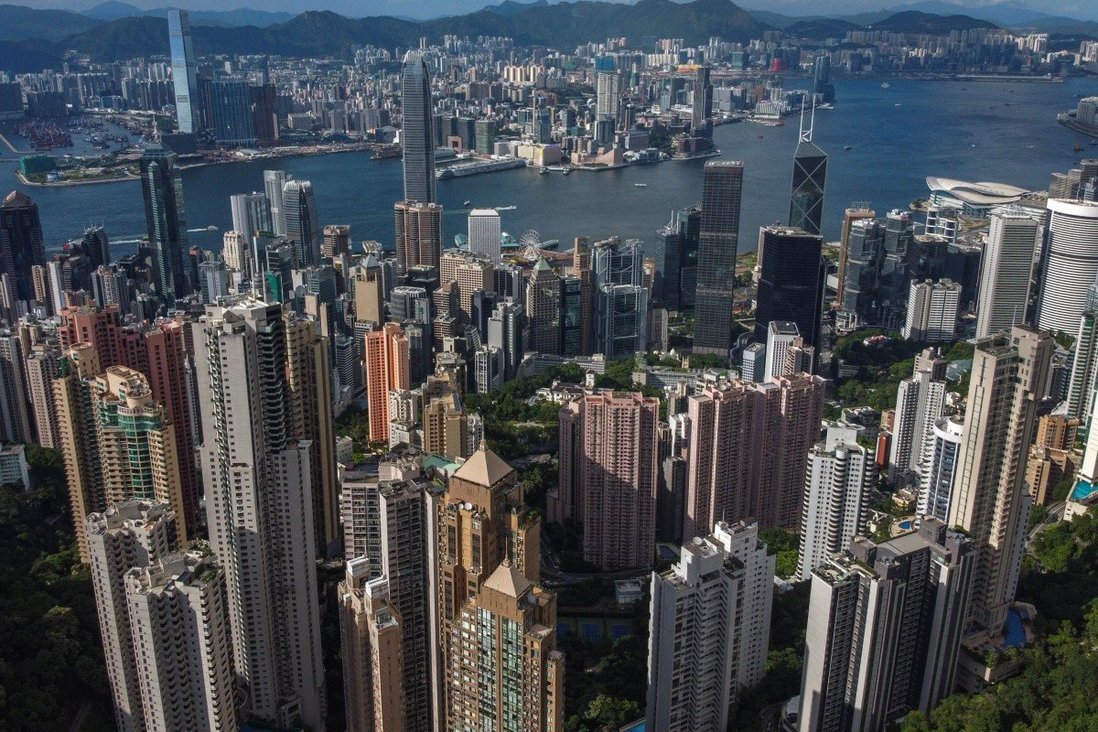 Better luck this year? Predictions on how Hong Kong will fare in 2021

Covid-19 will continue to affect economic recovery at least until autumn, but radical conflicts are not expected, fortune-tellers say.

The spectre of the coronavirus cast a pall over most of 2020, and while a new dawn awaits every dark night, Hong Kong’s geomancy and cartomancy practitioners interviewed by the Post have predicted another uneasy year for the city in 2021.

The pandemic that has wreaked havoc across the world will continue to plague the city, retarding economic recovery until autumn, despite the availability of vaccines, according to the clairvoyants.

It is not all doom and gloom, however – the soothsayers say the radical conflicts of 2019 are not expected, although some internal social disputes will linger.

On the Covid-19 pandemic

Celebrity Tarot card reader Fanny Wu Ming-fong, who has been practising for 20 years, did not expect a quick end to the pandemic. “Although vaccines are available, possibly the virus might mutate to weaken their effectiveness, if not making them obsolete,” Wu warned.

Combining astrology, Wu uses her intuition and judgement to interpret information stored in the tarot cards she has drawn and laid out in what she calls a Celtic Cross that formulates her visions of possible future events.

And the card that represents the overall outlook of the pandemic is “The Tower”, which is often interpreted as meaning danger and chaos.

“The appearance of the ‘reversed Moon’ card also suggests people are dealing with fears and anxiety,” said Wu, also predicting the pandemic would start to die down in autumn.

Wu had accurately predicted a fresh wave of Covid-19 attack in late autumn in 2020 after a brief reprieve. 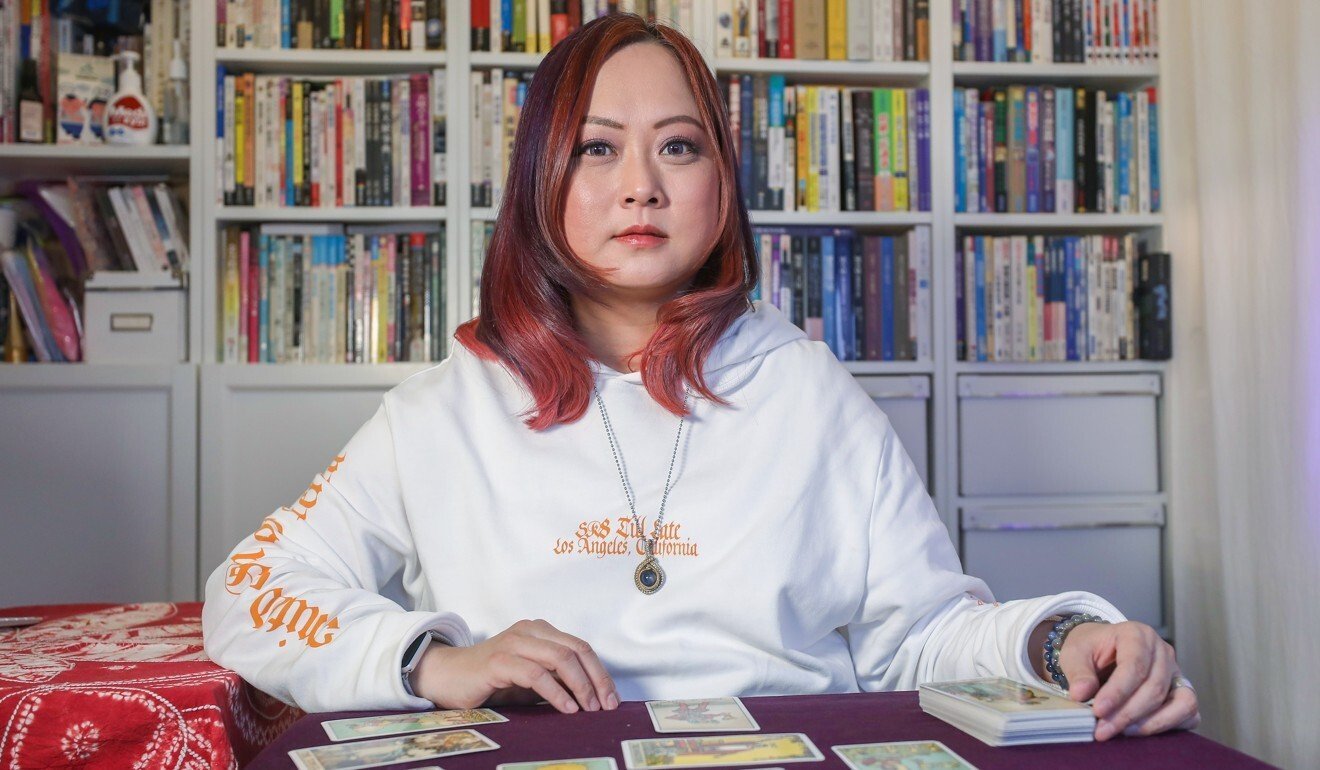 Her advice to Hongkongers: “We should unite and deal with the pandemic. Trust science and do not get fooled by rumours. Otherwise, we may never get out of the cycle of anxiety.”

Feng shui master Raymond Lo Hang-lap, who has earned a “grandmaster” title from the International Feng Shui Association in Singapore, also came up with familiar predictions, by calculating how the five elements – metal, earth, water, wood, and fire – interact based on the movement of the sun and moon that would create auspicious or inauspicious forces.

He said the year 2021 was the year of the metal ox, which did not contain the fire element.

Lo predicted there could be more cases of the flu and viral infections affecting people’s breathing organs.

He said he had accurately forecast the fall of Soviet leader Mikhail Gorbachev in 1991 and the killing of terrorist leader Osama bin Laden in 2011.

Eric To Chung-yin, a third-generation master Chinese astrologer, said 2021 would be an eventful year. His predictions are based on the Chinese sexagenary cycle under which everything can be regarded as running in a repeating, 60-year cycles.

“Sixty years ago, we had the Great Leap Forward campaign in China and millions of people died of starvation. And in the previous 60-year cycle in 1901, there was the unequal treaty of Boxer Protocol after the Qing dynasty’s defeat in the Boxer rebellion by the eight power expeditionary force,” To said.

“Hit by Covid-19, the economy can hardly rebound in the first half of 2021. Although the latter half of 2021 would become less unstable, there are still many ups and downs. The economy may not be able to fully pick up until 2022,” he predicted.

“With Joe Biden coming in as the new US president, things can get more predictable. And China might have an easier year ahead. That might also be helpful to Hong Kong,” To added.

Biden was born in 1942, the Year of the Horse. And those born in the horse year are regarded as more easy-going and sincere, according to Chinese astrology.

Famed feng shui master Danny Wong Chun-yue was more optimistic and predicted the economy would start recovering as early as the middle of 2021. The tourism and catering sectors would start picking up, he said.

He also called on Hong Kong people to stay united. “Hong Kong is a blessed place,” Wong said. “Although some sectors of the economy are hard hit by the Covid-19 pandemic, like tourism, retailing, some sectors remain strong, like housing.” 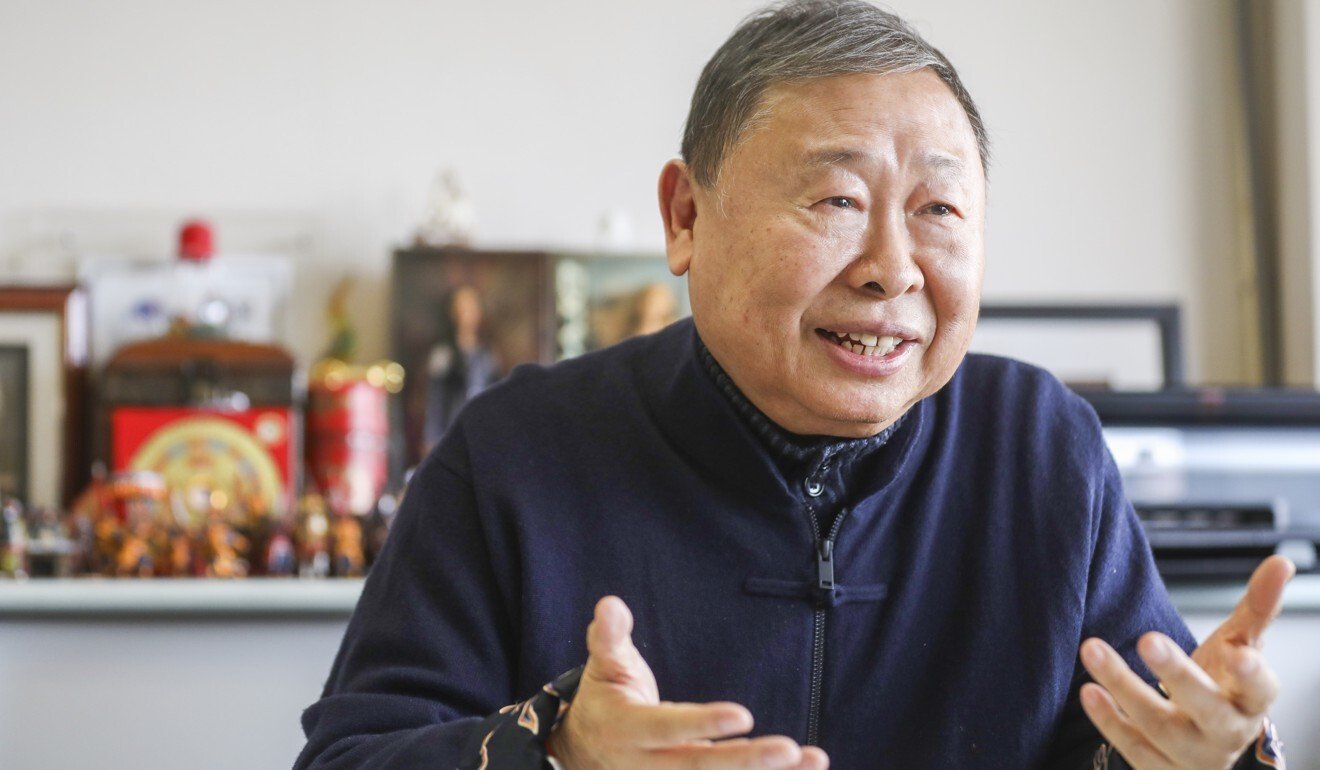 “People also need to keep brushing up their skills, so they can grab the opportunities when they come,” he added.

He also pointed to the Greater Bay Area scheme, saying the delta area was near water, and water was important in feng shui because it was the symbol of prosperity and abundance. Flowing water symbolises income.

Celebrity geomancer Fong Hoi-yue, president of the Shunto Metaphysics Association of Hong Kong, also predicted that 2021 would not be as savage as 2020. “The overall sentiment of society would not be as tense. But there are still some deep-rooted conflicts that cannot be resolved in 2021,” Fong said.

He expected those sectors under metal or water elements to boom in 2021, including tourism, transport, and finance, while those of the earth element, including property and construction, would be mediocre.

On Hong Kong’s politics and the coming Legislative Council elections

From the Celtic Cross spread, Wu predicted Hong Kong society would become more stable after the Legislative Council elections next summer – if the polls were held properly.

“The card that reveals the likely long-term solution of the issue is ‘justice’. It relates to the law and thus could be understood as referring to the Legco elections,” Wu said. “The message could be that if the elections are held properly, Hong Kong could become more stable.

“The card of ‘The Empress’ takes the central position and this should mean Chief Executive Carrie Lam Cheng Yuet-ngor will stay. She is unlikely to be removed from office,” Wu said.

But she predicted Lam, a Taurean, would still face difficulties in pushing her policies ahead.

Interpreting a “moderately good” fortune stick for Hong Kong politics, number 44, drawn at the Wong Tai Sin Temple, Eric To said it shed light on the coming elections. “On the surface, it carries a good message that things can go smoothly. But if it is to be interpreted from the perspective of politics, or elections, that might look different.” 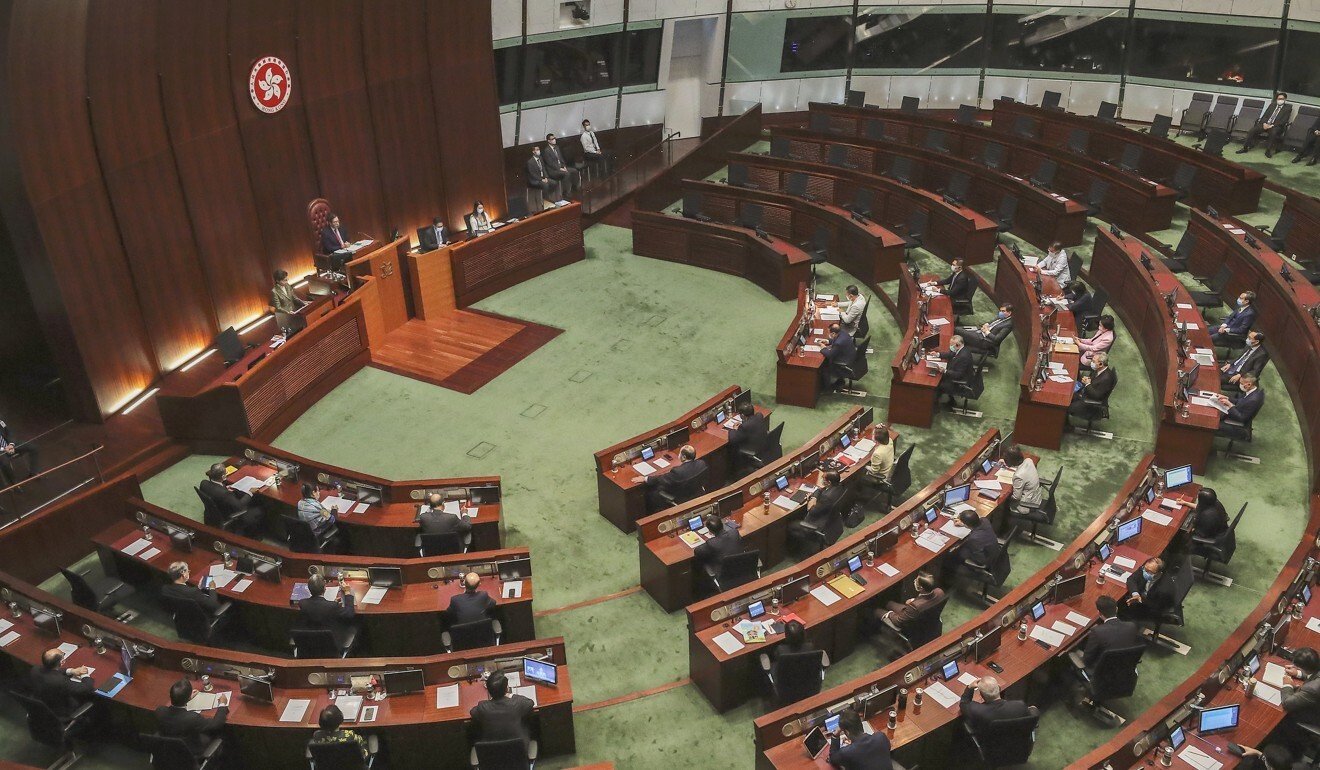 Written as a poem, the message on the stick, according to To, was about Emperor Xuanzong of the ancient Tang dynasty and his favourite consort Yang Yuhuan.

“The emperor asked his officials to name the most beautiful flower in the palace garden and all voted for peony because they knew it was Yang’s favourite flower and they wanted to please the emperor,” To said. “If I may interpret the message in this way – those whom people think Beijing favours will stand a better chance to win in the elections.”

But he predicted that Carrie Lam, who was born in 1957, the Year of the Rooster, would have an easier year ahead. “Overall, roosters would likely have good fortune in 2021,” To said. “But Lam’s role will remain passive. She will have to listen to her boss.”

To refused to be drawn into whether it was an auspicious or inauspicious sign for Hong Kong society, only saying: “It depends on your stance and the perspective from which you look at the issue.”

Earlier last year, he had predicted Lam would stay in her job as the chief executive, despite persistent rumours that Beijing would like to replace her over her handling of the social unrest in 2019. 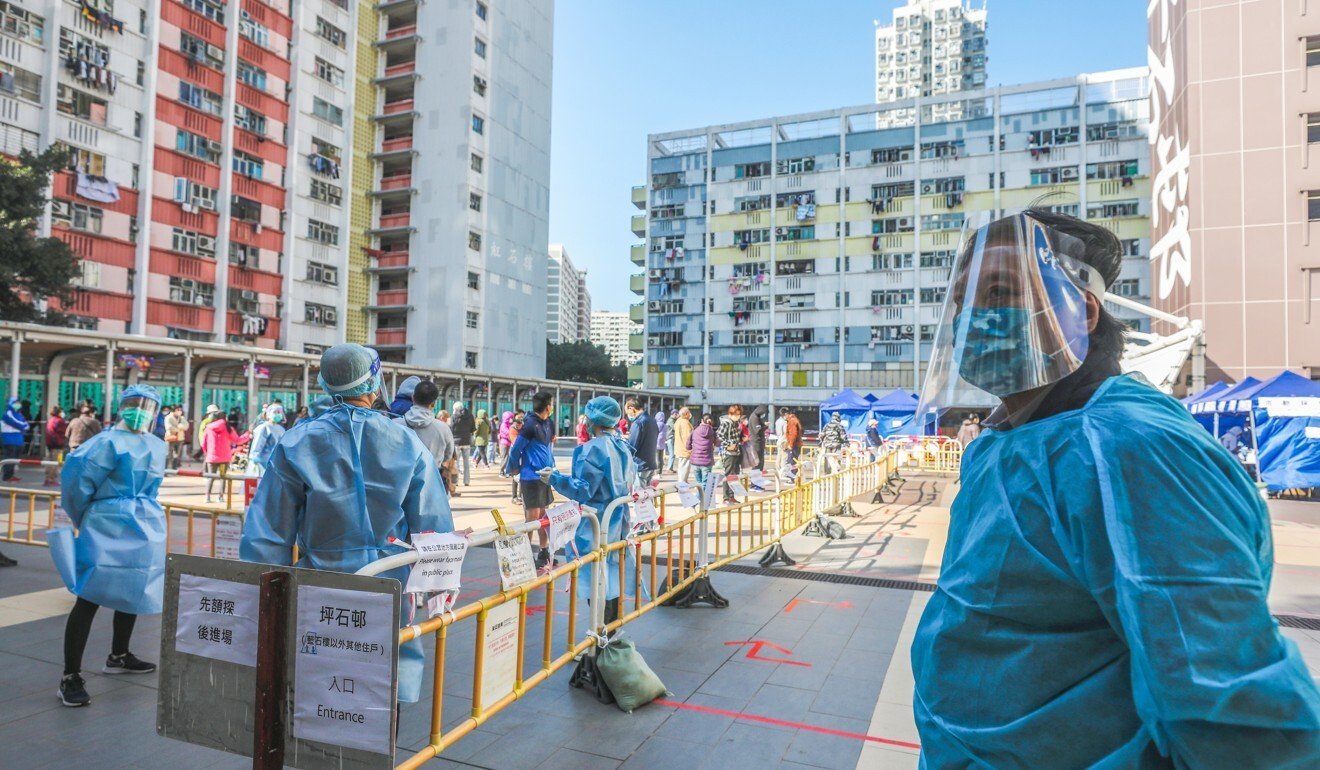 Tung Shing, a Chinese divination guide and almanac, had forewarned the arrival of a big plague last year.

The fortune-tellers warned, however, that their offerings were forecasts, likely trends, or patterns, and the future was not set in stone.

Wu said: “People thought tarot cards can predict the future. But tarot does not tell you what will happen. Each prediction or card selection may not indicate the same result. It tells you what might happen and it is still up to you to decide how to respond to an event.”

Wong also said: “A feng shui practitioner can tell you what is likely to happen. For example, we did foretell that there would be a big infectious disease coming early in the year. But the magnitude of the pandemic was unexpected.”

But Fong Hoi-yue cited Tung Shing, a Chinese divination guide and almanac. It had forewarned the arrival of a big plague last year that would cause a lot of deaths and that the outbreak would be the most serious during winter.

“Some people say 2020 was an unpredictable year, it is just that they were not paying attention. Because many geomancers had foretold the arrival of the plague. People did not take it seriously or just thought it would be some kind of flu. In addition, some countries did not handle the pandemic properly and let it go out of control.”