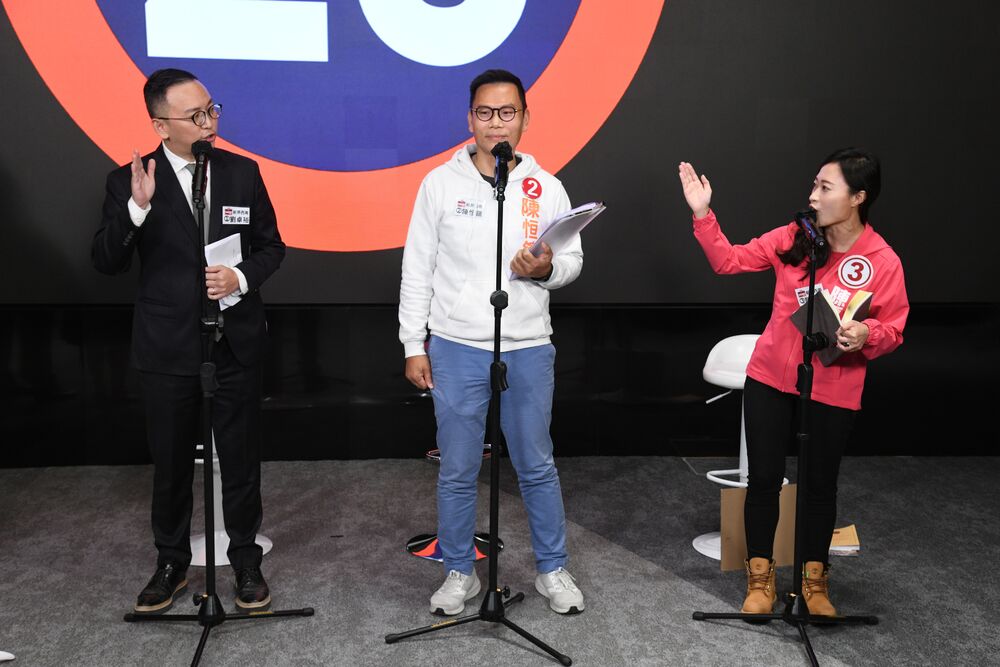 Candidate Ben Chan Han-pan threw his weight behind a fake news law in a forum among New Territories South West candidates in the Sunday Legislative Council elections, as he said society has already fallen victim of misinformation during the 2019 social unrest.
In the forum -- co-organized by Sing Tao Daily, Headline Daily and The Standard -- Chan from the Democratic Alliance for the Betterment and Progress of Hong Kong questioned his pro-democracy opponent Adrian Lau Cheuk-yu whether he supports a fake news law.

“May I just ask Adrian a simple question, were there any [protesters] dead in Prince Edward MTR Station? Were there [any protesters] being raped in the San Uk Ling Holding Centre?” Chan said.

Rumors among protesters suggested that there were protesters beaten to death in Prince Edward Station on August 31, 2019 after police entered the station and indiscriminately attacked commuters and protesters.

It is also widely circulated among pro-democracy supporters that protesters being arrested and kept in San Uk Ling Holding Centre were being raped by police officers, while both claims have been denied by the police.

But Lau sidestepped the question, saying that Secretary for Home Affairs Caspar Tsui Ying-wai, who is also Chan’s partymate, was the one who spread fake news, prompting over 200 district councillors to have resigned within two weeks in July this year.

Chan therefore asked Lau if he is trying to cut ties with his “companions” from the pro-democracy camp, and asked: “Is there a rape case and death in Prince Edward Station and San Uk Ling?”

In response, Lau said: “There is no rape case in Prince Edward Station, while there is no way I can find out whether there are deaths in San Uk Ling.”

Another candidate Joephy Chan Wing-yan from the Federation of Trade Unions mocked Lau for his “logical fallacy” while answering Ben Chan’s question.

Meanwhile, Hong Kong Island East candidate Jason Poon Chuk-hung questioned the DAB’s intervention in the election after it filed a complaint to the Electoral Affairs Commission against his criticism on misleading information on the party’s candidate Edward Leung Hei’s election flyers.

This came as Poon casted doubts on his opponent, 36-year-old Leung’s election leaflets on Facebook on Sunday.

On the flyers, the DAB logo is placed at the bottom left of a photo of Leung and a woman, with bigger fonts below the photo that read "serving Hong Kong Island East for 29 years."

“DAB’s Leung Hei said he served Hong Kong Island East for 29 years, but Leung is only 36 years old, does this mean that Leung began his service at the age of seven,” Poon wrote on his Facebook.

The party also said it is “a piece of fact” that the DAB team has served the Hong Kong Island East citizens for 29 years.

“Individual candidates try to use smearing to influence the election. DAB has decided to file complaints to the Electoral Affairs Commission and the Independent Commission Against Corruption to maintain the fairness of the election,” the party’s post said.

But Poon fought back again on Monday, demanding DAB and Leung to apologize to voters within 48 hours before he files a complaint to ICAC, which is responsible for enforcing electoral laws.
#Facebook
Add Comment