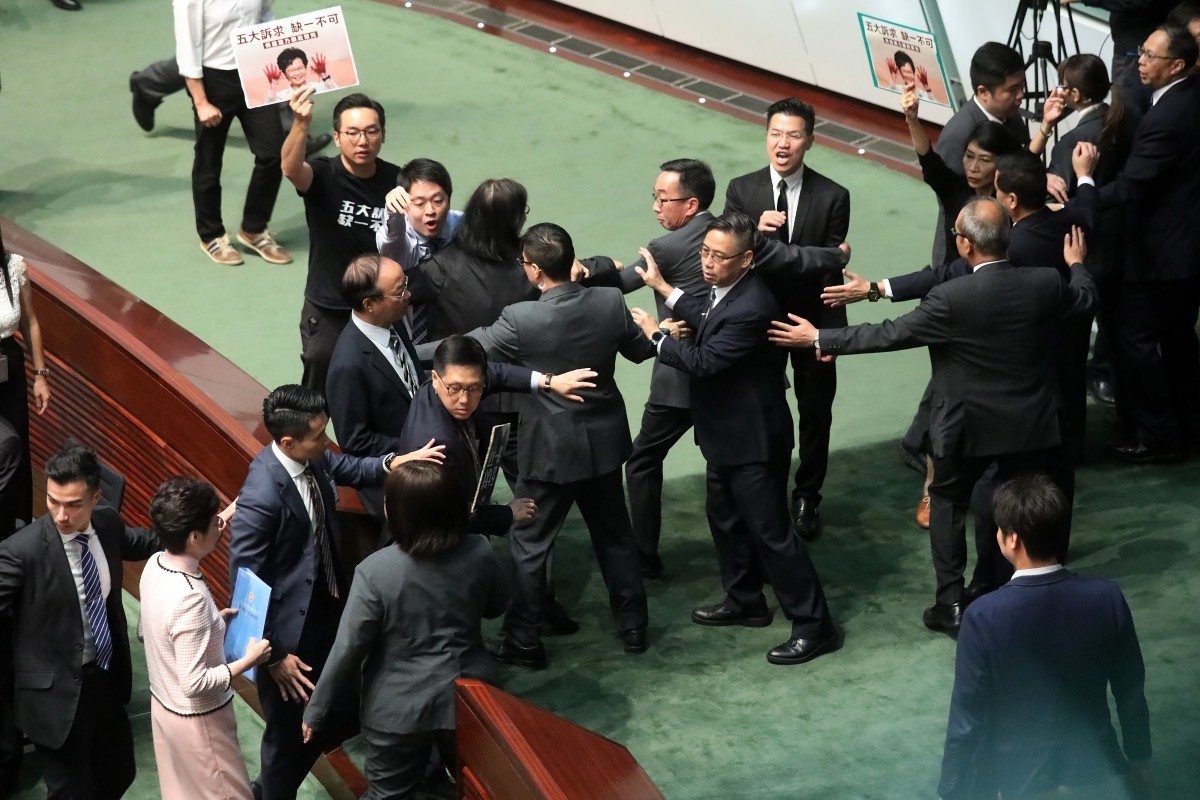 Chief executive proposes to boost affordable housing, find more land and improve livelihoods amid a worsening economy, but offers no political solutions on ongoing unrest
She again rejects protesters’ key demands, stressing instead the importance of adhering to ‘one country, two systems’ governing principle for city

Hong Kong’s beleaguered leader put the focus firmly on housing as a root cause of public grievances as she unveiled a policy blueprint on Wednesday that was not only universally panned but also had to be delivered by way of an unprecedented, pre-recorded video after opposition lawmakers blocked her from presenting it live in the legislature.

She again rejected protesters’ key demands, such as political reform to facilitate universal suffrage and an independent inquiry into allegations of police brutality, stressing instead the importance of adhering to Beijing’s “one country, two systems” governing principle for Hong Kong – with zero tolerance for independence advocacy and challenges to China’s sovereignty – upholding the rule of law, and protecting institutional pillars such as the judiciary and law enforcement agencies.

“So long as Hong Kong remains impeded by unresolved disputes, ongoing violence, confrontation and discord, our city cannot embark on the road to reconciliation and people will lose faith in the future,” Lam said. “We must reverse the prevalent pessimistic sentiments and stop the disorderly behaviour.”

There were no protesters besieging the heavily guarded Legislative Council complex as Lam entered the chamber at 11am to deliver her policy address, titled “Treasure Hong Kong: Our Home”, but pan-democratic lawmakers staged a rowdy protest, interrupting her speech and forcing a 20-minute suspension.

There was more heckling as she made another attempt to continue, and they projected the popular protest slogan “five demands, not one less” on the wall behind her podium, forcing her to retreat and settle for a pre-recorded, 51-minute video speech which was broadcast at 12.15pm.

“Housing is the toughest livelihood issue facing Hong Kong society. It is also a source of public grievances. I have never taken this lightly,” she said, announcing a raft of measures to help the middle-class and low-income groups buy their own homes.
A major policy plan is to spend HK$5 billion (US$641 million) on building 10,000 transitional homes in the next three years for those on the waiting list for public housing.

Another initiative will see the government-backed Hong Kong Mortgage Corporation relaxing mortgage restrictions for first-home buyers, raising the lending cap to HK$8 million from the current HK$4 million for those who are allowed to borrow up to 90 per cent of the value of a flat.

As expected, Lam said the Lands Resumption Ordinance would be invoked to take back sites being hoarded by developers and use them for housing, an idea floated by pro-establishment politicians and endorsed by Chinese state media.

In an effective U-turn after rejecting the idea earlier, the government will also offer a one-off “living subsidy” to low-income households which are not renting public flats or receiving welfare payments – including those on the waiting list for public housing.

“The reality is many people are queuing up for public housing … We need to free ourselves from ingrained bureaucratic thinking,” she said later.

On the economic front, Lam warned that Hong Kong was facing unprecedented challenges, with the US-China trade war showing no sign of ending and the city’s protest crisis aggravating the situation.

She officially declared the city’s economy had already slipped into a technical recession since the third quarter, as gross domestic product shrank 0.5 per cent in the second quarter from the preceding one.

To improve livelihood, Lam proposed increasing a series of allowances and subsidies, including for public transport and medical treatment.

While she did not talk in her policy address about the frustrations and aspirations of the city’s youth who have been at the forefront of the protests, Lam clarified at a press conference in the afternoon that the topic was covered in a supplement to her speech.

“It’s the last chapter because young people are the most important. Chapters on education, health care and housing also involve young people,” she argued.

Lam also announced her plan to conduct a Facebook Live session on Thursday night and take questions from viewers.
She again fended off calls for her resignation and questions about her ability and legitimacy to govern, given her struggle to restore normalcy after sparking the city’s worst political crisis in decades with her now-withdrawn extradition bill.

“I understand that as a result of these four months of social unrest, many people are very unhappy with the situation … But the will and determination to govern is still there,” she said.

But HKGCC chairman Aron Harilela noted that rifts in society still remained. “There is clearly a lot more work to be done in rebuilding Hong Kong and healing the divisions,” he said.

Both the pro-establishment and pan-democratic camps in Legco were critical of the policy address.

“There should have been substantial measures, so people can be confident about restoring social order,” said Starry Lee Wai-king, chairwoman of the Democratic Alliance for the Betterment and Progress of Hong Kong.

Opposition lawmakers accused Lam of avoiding the elephant in the room – a political solution to the ongoing crisis.

“The housing policies matter only if youngsters are staying in the city, but many are considering immigration with the city’s core values being eroded,” said Kenneth Leung.

Lam conceded that her policy address would not be a panacea to the city’s problems.

“This is just a beginning … We are also preparing to set up an independent study on the deep-seated problems in society,” she said.

She ended her speech on an optimistic note, declaring: “So long as we have unwavering confidence … Hong Kong will soon be able to emerge from the storm and embrace the rainbow.”

However, according to the Hong Kong Public Opinion Research Institute, founded by veteran pollster Dr Robert Chung Ting-yiu, her policy address was the most unpopular since the 1997 handover.

The institute interviewed 679 people on Wednesday, and a record-low 17 per cent said they were satisfied with Lam’s address, while a record-high 65 per cent were not. They also gave the policy address an average score of 29.7 out of 100.
Add Comment