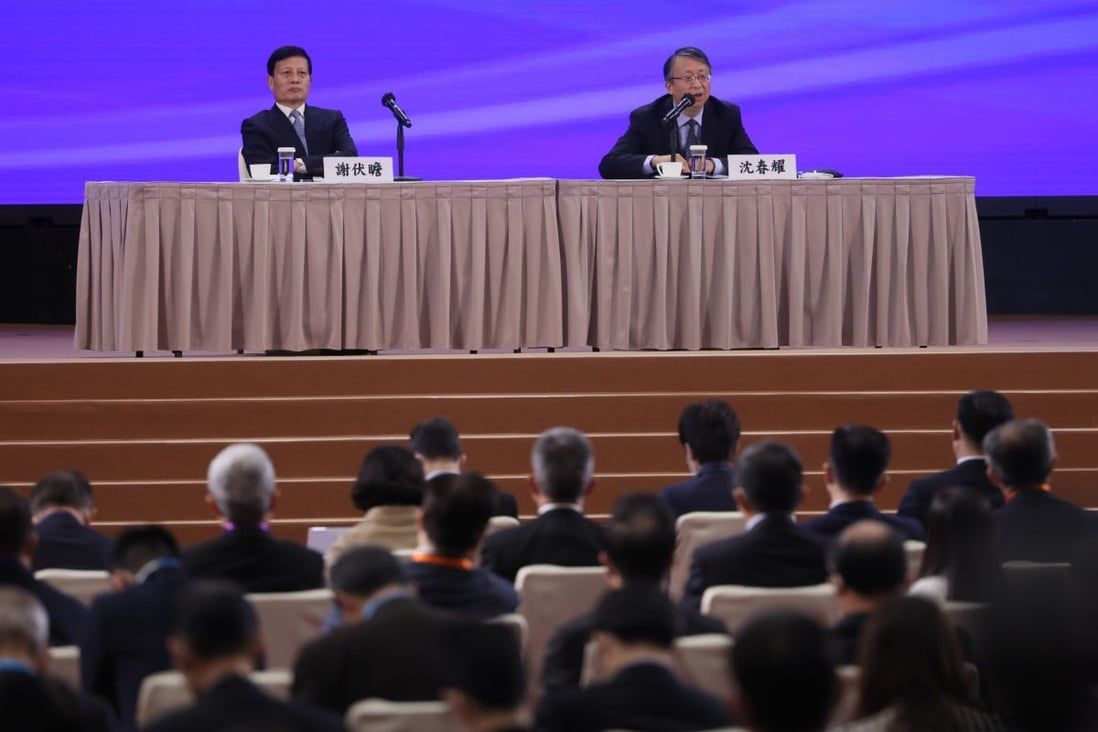 Work report affirms Chinese president’s past message that ‘one country, two systems’ is here to stay, but changes must be made to ensure upkeep of governing principle, legal expert says.

Shen Chunyao, chairman of the legislative affairs commission of the National People’s Congress (NPC) Standing Committee, on Saturday said the report from the Chinese Communist Party’s 20th congress affirmed Xi’s message during a visit to Hong Kong in July that the “one country, two systems” governing principle was here to stay.

“This is the best system safeguarding the stability and prosperity of Hong Kong and Macau,” he said, adding that the governing principle should remain an “executive-led” process instead of adopting the separation-of-powers model commonly used in Western democracies.

But the chairman also stressed the importance of making occasional “improvements” to the governance model.

“You cannot expect that all the questions we face now have been set in stone in the law by our predecessors 20 or 30 years ago,” he said. “Without improvements, the system can lose its energy and vibrancy.”

While Shen did not mention any specific changes, his remarks came on the back of an invitation for the committee’s Legal Affairs Commission to help provide an interpretation of whether foreign-registered lawyers could take up cases involving national security concerns.

The legal expert was joined by Xie Fuzhan, vice-chairman of the Committee on Economic Affairs, which is part of the Chinese People’s Political Consultative Conference, the country’s top advisory body. 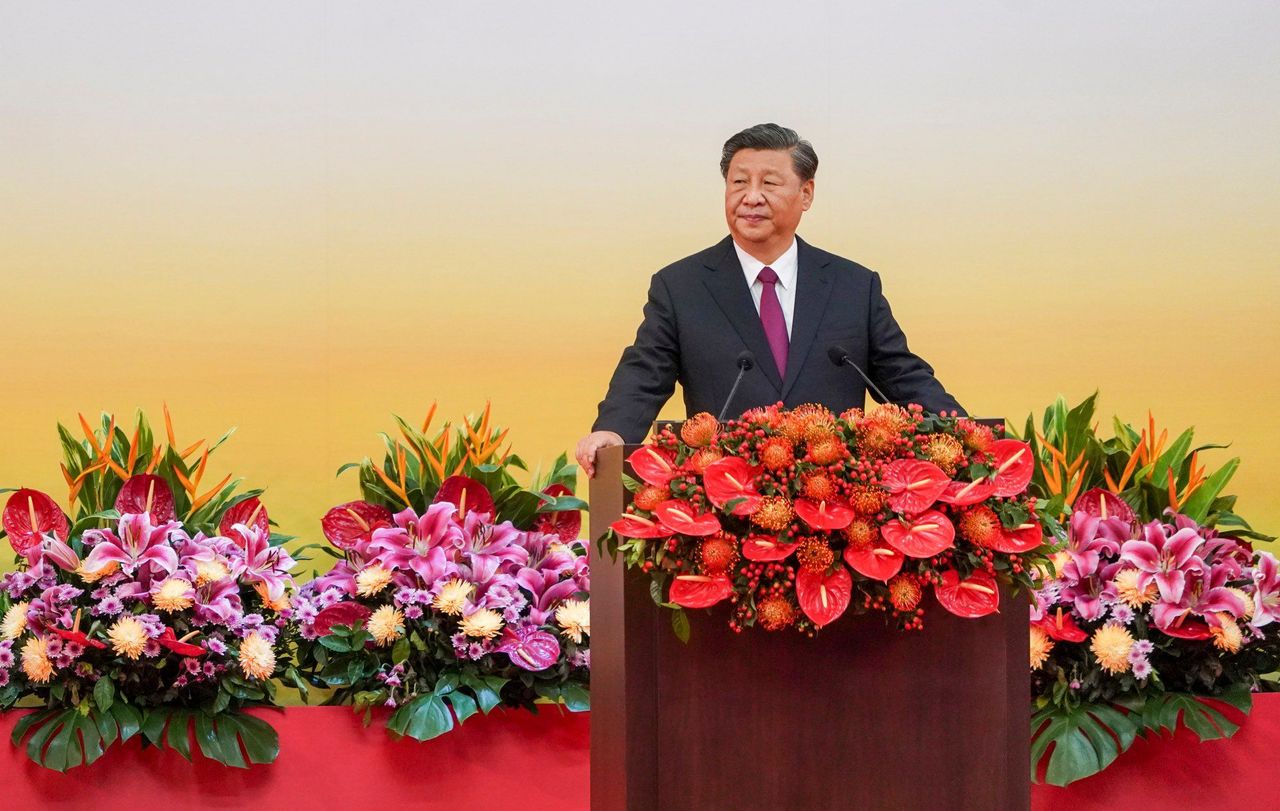 The seminar marks the first time mainland Chinese officials have flown into Hong Kong to deliver President Xi Jinping’s message in person.
The pair met Xia Baolong, director of the State Council’s Hong Kong and Macau Affairs Office, before speaking at the Convention and Exhibition Centre in Wan Chai on Saturday.

Yang Wanming, deputy to Beijing’s top official in Hong Kong, said the visiting experts had spoken to Xia before hosting the highest-level seminar on the subject of the work report from October.

While local authorities and several industry organisations have held similar events on the subject since the 20th congress, the seminar on Saturday marked the first time mainland Chinese officials had flown into Hong Kong to deliver Xi’s message in person.

While Xie spoke on Beijing’s plan to develop the country’s technology sector, Shen said that China had contended with four challenges over the past five years, comprising the social unrest in 2019, Taiwan, the coronavirus pandemic and smearing from the West.

Ahead of Constitution Day on Sunday, Shen also stressed the importance of understanding Hong Kong’s legal foundations, which he noted included the nation’s own constitution, as well as the Basic Law, the city’s mini-constitution.

The legal expert urged the city to make good use of its unique advantages, including its common law system, to contribute to the Greater Bay Area, referring to Beijing’s ambitious plan to transform Hong Kong, Macau and nine southern Chinese cities into an innovation hub.

Meanwhile, economic specialist Xie told the seminar’s attendees that the United States and other Western countries wished China to remain at the mid and low end of the industrial chain and continue to be the world’s factory.

“This is what we cannot allow in modernisation,” he said, adding that China must maintain a reasonable scale of manufacturing, while also continuing to improve on its level.

While Xie did not mention Hong Kong directly, the city has been earmarked as an innovation hub for national development, with its focus ranging from fintech to biomedicine.

The economic expert also said Hong Kong and the mainland had close ties in sectors such as trade, investment and finance. He added that each was the other’s most important trading partner, citing the city as the top source of foreign investment pegged for across the border, as well as a prime spot for the mainland’s direct outbound investment.

Xie added that there was huge room for cooperation in shipping and trade between Hong Kong and Shanghai.

Total trade volume between the mainland and Hong Kong reached US$360.3 billion in 2021, a more than six-fold increase from the level in 1997 when the city returned to Chinese rule, accounting for an average annual growth rate of 8.5 per cent, Xie noted.

He also pointed to how the mainland had absorbed US$1.4 trillion in investment from Hong Kong as of the end of 2021, accounting for 57.6 per cent of its total foreign direct investment.

However, political scientist Professor Lau Siu-kai warned against linking Shen’s remarks on refining the city’s governing model to current debates on the interpretation of the Beijing-imposed national security law.

“The central government has always said that the model has to be improved to make it more concrete, systematic and filled with details,” said Lau, who is vice-president of semi-official think tank the Chinese Association of Hong Kong and Macau Studies

The emphasis during the seminar on an executive-led system also highlighted how local authorities had failed to deliver on the concept in the past, prompting Beijing to raise the matter on Saturday, he added.

Also appearing at the seminar, Chief Executive John Lee Ka-chiu said the one country, two systems principle had helped Hong Kong over the past 25 years to overcome economic crises and the coronavirus pandemic.

Luo Huining, director of central government’s liaison office in Hong Kong, also said the duo’s visit showed the significance of the work report and how much Beijing valued the city.
#Coronavirus
Add Comment