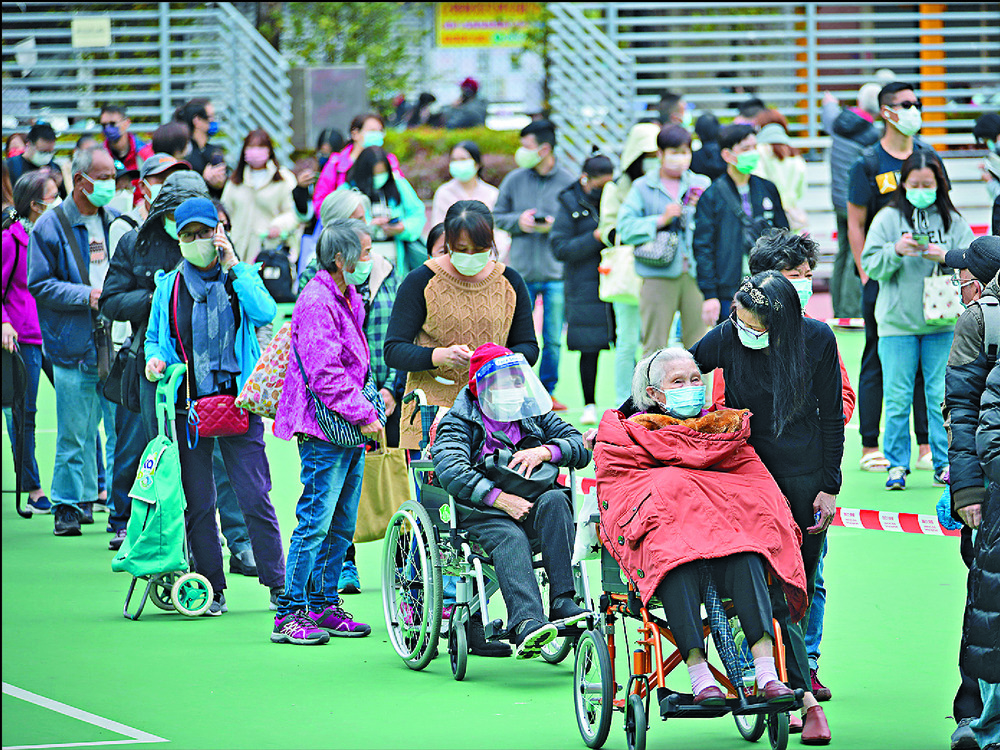 Beijing should provide Hong Kong with more manpower to help vaccinate elderly residents in care homes quickly to speed up the city's vaccination rate for seniors, expert Lau Yu-lung said.
He also proposed shortening the duration between the two doses from 28 days to 14 or 21 days.

"Around half of the residential care homes for elderly have seen infection," Lau said yesterday, adding that the most important task for Hong Kong now is to increase its vaccination rate.

Lau said he had already taken the suggestion to Liang Wannian, head of the National Health Commission's Covid-19 leading task force, in hopes that central authorities would send medical personnel to vaccinate the elderly in local care homes.

He also said that Covid-19 can be considered an endemic disease only if its fatality decreases from the current 0.03 percent to 0.01 percent, similar to the fatality rate for influenza.

As of March 1, around six million people or 89.3 percent of the eligible population have received at least one dose and 5.2 million, or 77.3 percent, the second. Around 1.78 million have received booster jabs.

Infectious disease expert Ho Pak-leung said yesterday that about 780,000 people aged 60 years or above have not received two doses.

"Is this because these people are reluctant to get vaccinated or the government did not do enough to promote vaccination?" he said, adding that this is an issue that is worth reflecting on.

Ho said vaccinations can significantly lower the fatality rate among the elderly as fully vaccinated people aged 80 and above see 91 deaths per 10,000 infections, much lower than the 578 death for their unvaccinated peers.

He added that only 24 percent of Hongkongers have received the third dose, much lower than other high-income regions around the world that have seen around 41 percent of their population receive booster jabs on average.

Meanwhile, a research team from the University of Hong Kong found that the risk of adverse effects from vaccines is similar among healthy and high-risk groups.

Researchers looked into the data of over 880,000 chronically ill individuals based on medical records from Hospital Authority and the Department of Health and found that vaccinated patients, whether they chose Sinovac or BioNTech, were not at a higher risk to adverse effects than unvaccinated individuals.